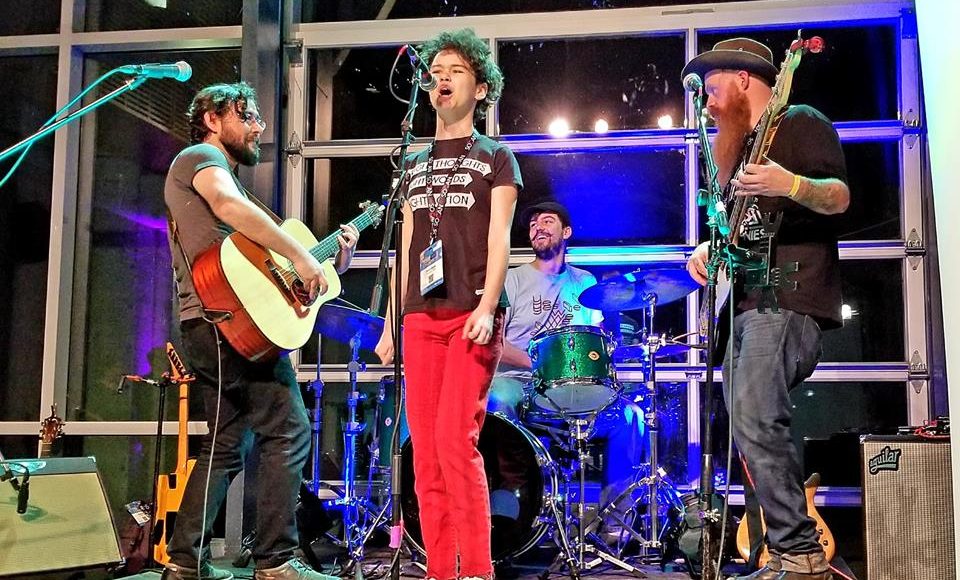 Other than the multi-coloured decal prints spray painted all over our sidewalks, BreakOut West left a more permanent imprint on Kelowna’s musical community this weekend as the 2018 Festival Showcases came to a close Saturday night.

“This festival has served us in so many way,” said Oot n’ Oots bass player Gabe Cipes. “I just have to take a moment to soak in everything I’ve heard.”

Opinions were similar across the board.

“That Mini-BOW was so awesome,” said Laura Koch of The Kwerks as we stuffed our hungry bellies with Nagano’s yummy spicy tuna rolls and miso. “I will need some time to mull over the whole experience.”

I’m a mother of two, and I only stay up late when we’re gigging or careening around the province during summer’s busy festival season. It definitely took me a couple days to get enough sleep in after several late nights spent walking along Kelowna’s urban streetscape, and coming across act after act after act of incredible music, unique performances, and top-notch art.

On Friday night I sat in the front row of Quantum Tangle‘s festival highlight performance for me, at The New Arts’ Collective. A person with auburn hair and round glasses asked if they could sit beside me. It later turned out to be Saskatchewan singer-songwriter Meghan Nash and she told me her set would be Saturday night at Milkcrate Records.

So I stopped in at Milkcrate first as darkness descended and the lines started up again Saturday night.

She was hilarious! Her storytelling and quirky ambiance was comforting, cozy, and eclectic. She brought the prairies right through her rhythmic electric guitar and you could almost see the grass swaying in the breeze.

From there I walked toward the Craft Beer Market to check out Campfire Social who was in town all the way from Wales, UK. On the way over I bumped into Tiger Moon’s Dan Tait and Kasey Graff, busily brainstorming over a set list and a smoke.

I carried on and thought I recognized the profile of a woman’s face up ahead as she put on a silver sparkly hood. I ran to catch up to her and to my pleasant surprise of my inner facial recognition device’s accuracy, it was my old friend Olga Poreda singer of local band Beardy and the Beast.

There was a lineup in the lobby at the old Paramount building so we headed across the street to DOJA Coffee Shop, to watch an electronic artist from Northwest Territories NÀGHĄ.

We walked in on hip hop artist PIMPTON’s last few songs. His flows were punctuated and heavy and he was so animated and full of comical character.

It took awhile for the man behind the mask to get all his electronics in order, including an old black telephone receiver he had rigged up as his only microphone. He was a master composer of electronic ballads with thick beats and wailing guitar riffs.

I made a quick dash over to The NAC to support my buddies Tiger Moon and Ben Klick. And the night ended with a fat slice of late night DunnEnzies’ pizza. Apparently, I wasn’t the only one with a pizza itch. Andrew Judah and his crew came in, as did Ari Cipes the youngest of the Oot n’ Ooots brothers.

“What’s the top act in the area?” asked Jay Devonish of Entertainment One out of Toronto, over a slice of BBQ chicken. “That’s what I’m here to do. I came here to find the best.”

BreakOut West created a self-generating force of musical artists, producers, agents, and festival directors from all throughout Canada and around the world. Along with a number of important contributions, I think the most impactful one for Kelowna was how the event demonstrated what music alone can give to a growing economy.

Hopefully our businesses, our City Council, our artists, and our audiences can work together to ensure meaningful community-based development of the arts and ensure a healthy future.