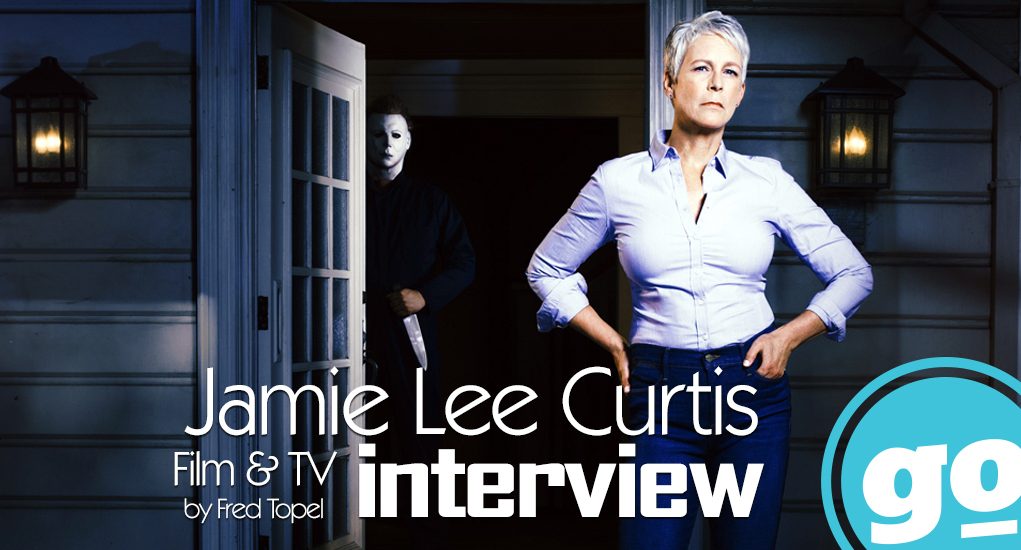 This new movie is called Halloween but it’s not a remake. It is a direct follow-up to the 1978 slasher movie classic and Jamie Lee Curtis returns in the role of surviving babysitter Laurie Strode. It’s not the first time. She came back 20 years ago for Halloween H20, but this one is monumental.

Now Laurie is estranged from her family because she never got over the attack by Michael Myers. Her granddaughter Allyson (Andi Matichak) tries to connect with Laurie, but Laurie is still ready for Michael’s return.

Gonzo got to join a roundtable interview with Jamie Lee Curtis where she discussed the legacy of the Halloween films and her career in the business. It sort of runs in the family. Her mother is Janet Leigh from the original Psycho. See her fight back in Halloween, from director David Gordon Green, in theaters Friday, October 19. 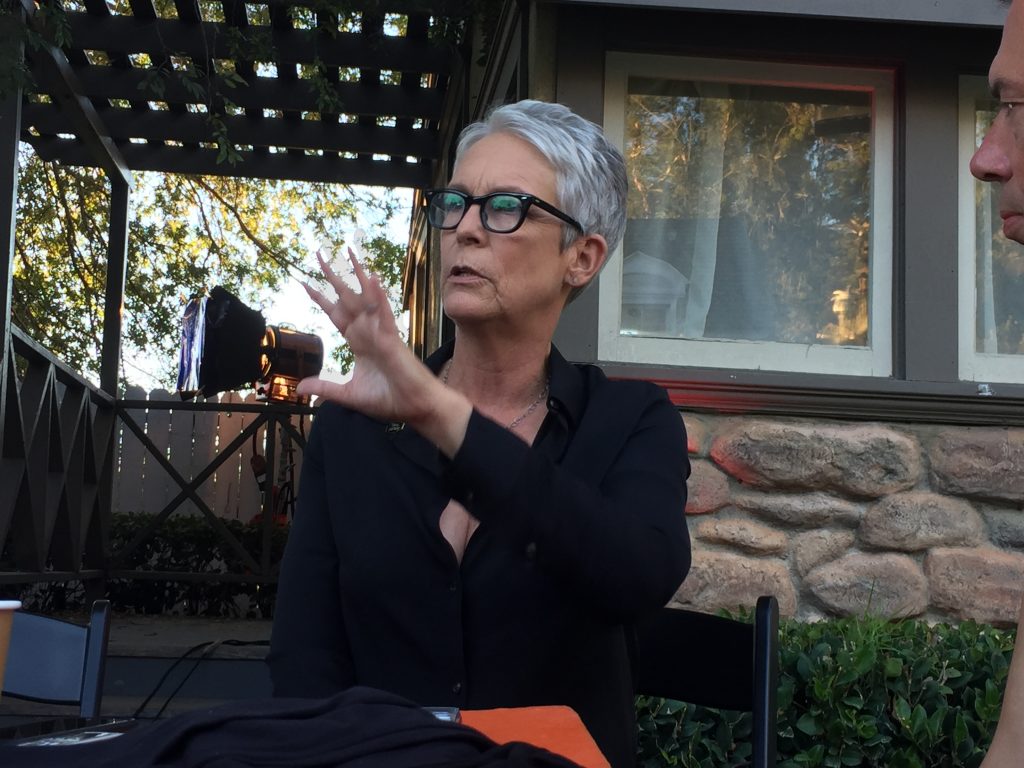 Gonzo: In 1998, Halloween H20 was your idea and it was sort of compromised by the studio. Was this a chance to come back and do it right?

JLC: No. You know what? H20 was my simplistic idea of hey, we’re all still in show business. The movie’s 20 years old. How often does that happen? Let’s make a 20th anniversary movie and deal with the trauma there. In her case, she was running. So in the 20th H20 movie, Laurie has changed her identity. She’s no longer Laurie Strode and she’s running. You can’t run from the Boogeyman, so she was an alcoholic and drug addict. We tried to explore it a little bit in that movie but she wasn’t Laurie Strode. She’d already given up her identity. It just didn’t work. I mean, it was good. There were great things in it and I don’t think the studio compromised it. It just wasn’t great. It was good. I’m happy with that movie but I say it was simplistic because I think it was just more like, “Oh, people will love this.” I don’t think it had the depth.

Q: The one moment Laurie breaks is when she’s in the car watching the prison transport. How did you find those moments of vulnerability within the warrior Laurie?

JLC: It’s a movie about trauma. There’s no question, generational trauma, but it can’t be heavy. It’s a horror movie. This is a Halloween movie so it can’t be heavy and laden with a psycho drama. It has to be judicious. David and the writing were very clear that we just want to see a little bit of it. That scene was actually the last thing I shot on the movie. The entire movie I was very isolated. I left my home. I’m a homebody, a mom, a card carrying friend. I buy a lot of birthday presents. I’m that girl. I left and I went to make this movie and I was very isolated. From the moment I began the movie, the trauma just all came back. The first time I walked on set, it was very emotional. It was that way all the way through. The last scene we shot was her alone in the truck. It’s written in the script, Laurie sits in her truck. There’s a gun. There’s alcohol and basically 40 years of trauma come back. Now, what do you do? So I prepare, I work. Again, very isolated. We were out in the middle of nowhere in Charleston on a street called Ashley Posphate Road in a truck, in a parking lot, with just her little truck and a bunch of lights and a bunch of people. As I prepared, and they said, “Jamie they’re ready for you,” it’s at night. You need to know that when I make a movie, I like crews to wear name tags because I like to know who you are because I don’t know your names. On this last day of the movie, as I came out of my trailer and I approached the set, 100 crew were all wearing a name tag that said, “We are Laurie Strode.” The entire crew was saying we are with you. We are all in this together and we believe in you. Needless to say it was an incredibly emotional gift for them to give me. Then I got in a car and relived 40 years.

Gonzo: Is Andi Matichak where you were when you did the first Halloween?

JLC: It’s completely whack. She and I had dinner the first couple days when I was in Charleston. We didn’t know each other. She was 19. She was going to college on a soccer scholarship, and that summer before her college, she went to model in Greece and met and actor’s manager who said you could be an actress. And she gave up college and moved to New York to become an actor at 19. And I was going to college and ran into a manager who said, “You could act” and I went up for a part and ended up quitting college and becoming an actor at 19. This was my first movie. This is her first movie, a Halloween movie. Neither one of us were going to be actor and we both ended up as actors in a Halloween movie for our first movie. It’s incredible. By the way, there is a picture of my mother at 19 and if you go on one of my social sites, I posted a side by side of my mother and Andi. It’s uncanny. She looks like her twin sister. My mother was gorgeous and Andi is gorgeous. The two of them, it’s crazy. And she’s a very grounded girl from a good family. She’s going to be a big star.

Q: What path were you on before acting?

JLC: I was going to be a cop. By the way, I could barely sleep my way out of high school. I was such a poor student, the only college that took me was the college where my mother was the most famous person to have ever graduated, and they wanted me with my D+ 840 combined SATs.I was going to major in corrections and be a social worker or police officer, law enforcement, very happily. I would’ve made a great cop. I am a great cop, talk to my family. It was totally by accident. Never thought I’d be an actor, ever, but a manager who I knew named Chuck Binder who I credit everything to said to me, at Christmas break when I came home and he was teaching tennis at my friend’s court, he said, “Hey, they’re looking for Nancy Drew. Why don’t you go up for it?” I said, “Okay, Chuck, sure.” I auditioned at Universal for Nancy Drew. I didn’t get it but they somehow liked something about me and that month of January, I ended up staying home from college and did an independent study which I still have the paper that I wrote, How To Break Into Show Business. I did an independent study for one month for drama credit, and I basically went on auditions, took acting classes and wrote a paper, like a journal of what I did. I was going to go back to college on January 24 and start my second semester of school, and I ended up auditioning for the contract system at Universal. The woman, Monique James signed me to a seven year contract on January 22nd and I didn’t go back to school. It was all by accident. The last thing in the world I thought I was going to do is become an actor.

Q: You’ve been loyal to Halloween and came back several times. How much weight do you feel returning to this role after 40 years?

JLC: I never thought I was going to be an actor, as I said. The only conscious decision I have ever made as an actor is to not do another horror film after Halloween II. Without a pejorative to it, without denigrating the experience, I knew if I didn’t stop, I would never be able to do anything else. I literally said I will not do another horror movie. A week later I was cast as Dorothy Stratton in a TV movie about her murder. Weirdly enough, the reason I’m in Trading Places is because of horror movies. Nobody knows this. Now you all will. John Landis was directing a short about ‘50s movie trailers called Coming Soon, about horror movies. He needed somebody to narrate and be the host of the documentary. Who did John Landis call? Jamie Lee Curtis. I’d never met him. We shot it on the back lot of Universal and it’s me going, “Hi, I’m Jamie Lee Curtis. 1952…” Clearly, I made him laugh a few times because it was John Landis who singlehandedly told Paramount that he was going to cast me in the only female part in a very big budget Paramount comedy starring Eddie Murphy and Dan Aykroyd. The only female part in the movie, he’s giving to me. You know and I know that there was blowback. They told him, “No, are you crazy? We’re going to put somebody else in it.” He was like, “No, I’m going to put this girl in it.” He wouldn’t have known me, I never would have known John Landis had it not been for horror movies. It was that short I did for him that he then went, “She’s funny. I’m going to put her in Trading Places.” Then Trading Places leapfrogged to John Cleese seeing Trading Places and writing A Fish Called Wanda. Then Jim Cameron seeing A Fish Called Wanda and writing True Lies for me. All three written for me because of the thing before. None of it would have happened had I not been in a horror movie.