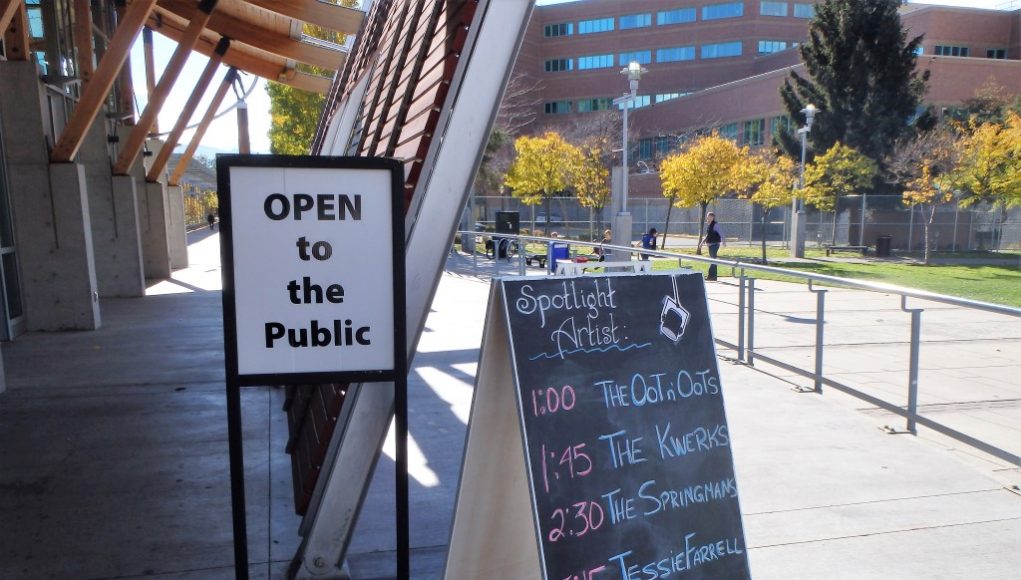 The Rotary Centre for the Arts bubbled with glee Saturday afternoon as Mini Breakout West, a free family music festival was presented. In addition to featuring four bands, the local organizers offered all sorts of fun activities for the whole family such as karaoke, art exhibits, musical instrument petting zoo, and making your own tambourine from paper plates.

With a sunny day beckoning in full view of the glass showcased building, I wondered how the little ones would resist the autumn outdoors.

First to the stage were locally loved and indie rock rising stars Oots n’ Oots. Fronted by 11-yearold vocalist Ruth Cipes with her dad Ezra (vocals, guitar) and uncles Ari (vocals, guitar), Gabe (vocals, bass), and Matthew (vocals, drums), Oots n’ Oots got things rocking right from the sound check. If you thought you recognized the Cipes name from the iconic Summerhill Pyramid Winery, you’d be right and their music sparkles as brightly as the award-winning organic wine.

The band has performed at the Fat Cat Children’s Festival, Lake Country Children’s Festival, Breakout West Festival, and West Kelowna’s World Music Festival. It was nominated for Children’s Artist of the Year at the 2017 WCMAs, and for a 2017 Okanagan Arts Award. Both the debut album “Songs and Tales from the Great Blue Whale” (released December 2016) and second album “Electric Jellyfish Boogaloo” were available for purchase with proud mom Rio volunteering throughout the afternoon at the sales desk.

While I had seen a video clip on YouTube, Oots n’ Oots truly shines live and the depth of little Ruth’s talent and smoky big vocals was truly captivating. Within minutes, kids, moms and dads were dancing and bopping to the tunes.

National Top 10 in the CBC Searchlight, The Kwerks is the happy result of Laura and Ryan Koch dropping everything to pursue music. “A solid mix of rhythmic folk-pop, a hint of bluegrass, and a nod to pop-rock makes up The Kwerks’ sound, with a simple message. Enjoy life. Live it now.”

The upbeat and fresh sound had little and larger fans tapping, singing and dancing along in no time. The Kwerks released two EPS in 2016 and one in 2018, struck a commercial deal with Dominion Lending Centres, scored three music award nominations and one award, and by popular voted were viewed on CBC Searchlight’s National Top 25 List.

This Vancouver, Canada based award winning international touring music group has a unique style of ukulele-strumming, djembe-drumming, and guitar-picking catchy songs. Front man Perry Springman (acoustic guitar and ukulele) plays for the kids and is joined by his own four children, Emma, Ryan, Sarah and Jacob.

The Springmans’ album, HAPPY BEACH, produced by multi Grammy© Award winning songwriter/producer Mark Heimermann, was released in 2016 and received a National Parenting Products Award, a Parents’ Choice Award, and the 2017 GMA Canadian Covenant Award for Children’s Album of the Year.

The Springmans are accomplished musicians and love to engage their audience with fun participative elements such as trampoline bouncing, hula and samba dancing. Saturday afternoon was no exception as all ages embraced “the kid in all of us”.

As the grand finale performer, Canada’s country music sweetheart Jessie Farrell had no problem keeping the family audience engaged. An award-winning vocalist and songwriter, she was nominee for the 2009 Junos’ New Artist of the Year, and in 2010 was awarded a Juno for her vocal contribution to the all-star charity Single of the Year “Wavin’ Flag”.

Breaks between acts were just long enough to accommodate a bit of a romp outdoors or exploration of indoor activities. The pure unadulterated joy that permeated was palpable and I drifted back to my own childhood. I watched as my friend Nikki attended with her six-year-old female friend. Ready to be flexible with the day, by the time the mini-BOW ended, and the young lass had danced her face off and made new pals, Nikki claimed the title of best date ever.

Mini-BOW was free, save for a request of attendees able to donate with proceeds going to family cultural programming. Moments such as these are the touchstone for instilling music appreciation for the future.