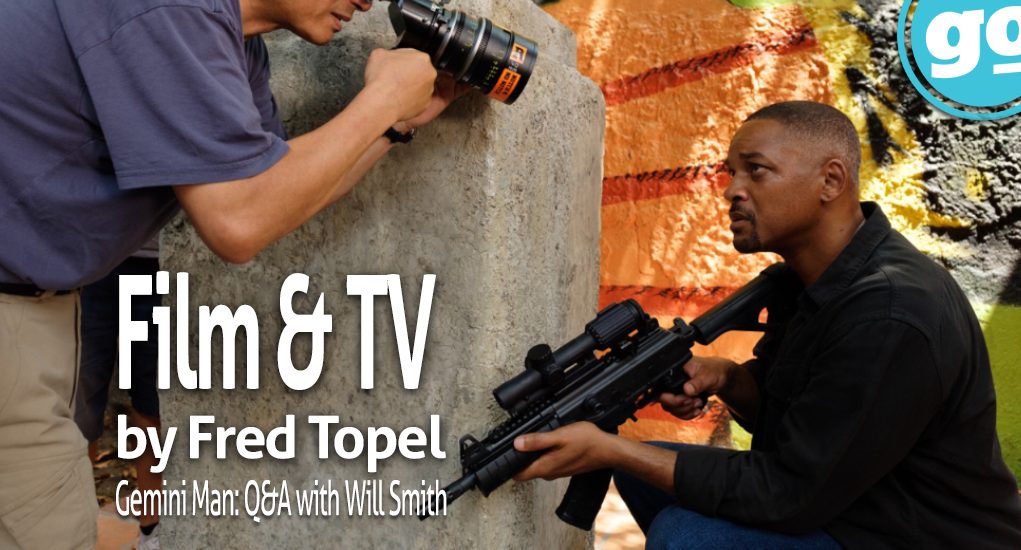 Will Smith plays two roles in Gemini Man but there was only one Will Smith in person. Gemini Man stars Smith as Henry, a 51-year-old assassin, and his 23-year-old clone Junior. Henry didn’t know he was cloned so he is mighty surprised when Junior shows up, not to mention Junior is trying to kill him.

Movie magic allows Smith to play both roles, and to appear 23 years old as Junior. Smith was at a press conference at YouTube Space in Los Angeles and Gonzo was there to ask him a question about the film. Gemini Man is in theaters Friday, October 11.

Gonzo: You crafted your movie career very carefully with science fiction movies that were inspired by the biggest blockbusters. In today’s climate is a movie like Gemini Man the underdog?

Will Smith: Yeah, absolutely. Definitely, in this new world, it’s a whole lot safer from a financial standpoint to make a part three of something than it is to do something brand new from the ground up. That’s what we were all excited about with this and what Ang [Lee] kept saying in why to push the envelope to give people a new reason to go to the movie theater to see something that you can’t see at home. In terms of the first part of the question, Star Wars was the movie when I was growing up. I was stunned sitting after Star Wars ended. I couldn’t believe that they could make me feel like that with a story and with these characters. I think career-wise, the things I’ve been chasing are Star Wars and Thriller are the two pieces of entertainment. I’ve always been hoping to make something that matches for others how I felt when I experienced those.

Q: How did you feel when you first saw Junior?

WS: It was really crazy the first time I saw it. It was chilling almost. It was a little scary because the first one I saw was one of my favorite shots in the whole movie was when Henry flips Junior over in the catacombs and then puts the light up onto Junior’s face. So that was one of the first completed shots that I saw. It was a little bit surreal, little bit weird and then I started getting excited about all of the possibilities, the young Will Smith young Marlon Brando movie that can get made. It can get made while I’m at home which would be great. It’s a full 23-year-old digital version of myself and my mind just started to go wild about what you would be able to do. Because everyone is looking at the Junior character, people don’t actually realize there are full digital old Henry shots in the film also. There are moments when full frame closeup shots of old Will, old Henry are in the film also. That’s when you can really tell it works, when people aren’t thinking about it. Even the action sequences, how the action sequences were done is normally you do an action sequence and you can’t actually punch somebody in the face, so you take a shot, you go behind the head, and oh no, I missed, so you move the camera. You keep going. Now what we’re able to do with this technology, you do the scene, you do the swing and then they take the fist and actually put it on the face of the digital character and bend the face and throw the sweat and all of that. So when you’re seeing those shots now where we’re used to seeing misses with sound and blur, now you’re seeing full shots in the same way you see in MMA. So it was a really great new way to do the action. You do all these different variations and then the stuntmen can do full takes and we can do full takes and they’ll be able to make the most visceral version of it when they get all of those assets into post. So in terms of action, I’m really excited about the use of this technology in the future.

Q: Have you thought about what you’d like the next phase of your career to be when you can’t be the action hero anymore?

WS: He can keep me jumping off buildings into my 100s. No, I think more than just a transition in roles is I turned 51 last week. I’m experiencing again a transition in my life. More than ever, I’m seeing my role in the world as a role of service. In my younger days, it was ambition. I wanted to win. I wanted to put points on the board. Now I’m growing into the position in my life where the main question that I ask myself before I do anything is how is this of service to the human family? So with that prism, I’ll be making more and more decisions in my life. I love science fiction. I love filmmaking. Even wanting to do this here at YouTube is a bit of an outreach for me to a new generation, the next generation of artists and filmmakers. I’m just trying to figure out how everything that I do is conscious and thought out and of some justifiable service to the human family.

Q: Was making Henry from Philly your idea?

WS: No, we didn’t change that, did we? Henry was always from Philly. When I read it, I was like, ‘That’s Jerry trying to get me to say yes to the movie.’ It was already in there.

Q: If you could meet your 23-year-old self, what would you say to him?

WS: I would be asking my 23-year-old self for advice because he made some good-ass decisions. I wouldn’t have done it that way but he made some good calls. So for me just in the last couple of years, I’ve been feeling trapped by the success that I’ve had and that the decisions and choices I’ve been able to make are getting smaller trying to protect Will Smith. So on my 50th birthday I was like F it and I just jumped out of a helicopter over the Grand Canyon trying to get back to that youthful fear space. So I would be interviewing him more than trying to give him advice.

Q: How would you feel if cloning became a possibility?

WS: I think we all have the human quest to overcome our pain. So we’re all trying to figure out how to eliminate suffering from our lives. When I think about cloning and we talked about it a lot on this movie, it’s one of those scientific reaches that I think we’ve already gone down the road. I’m sure there’s absolutely things that have happened in cloning that we don’t know about yet but we’re going to find out.