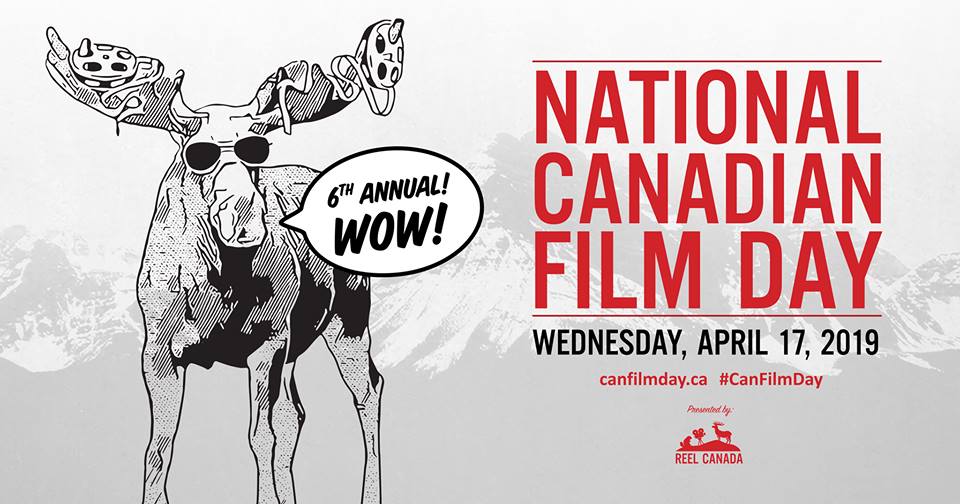 TORONTO, April 2, 2019 /CNW/ – REEL CANADA today announced the sixth annual National Canadian Film Day (NCFD), celebrating 100 years of Canadian cinema, has been met with real Canadian enthusiasm. More than 1,000 screening events will take place in 600 Canadian communities and 25 countries, from the northern tip of Baffin Island to St. John’s, NL, to Tofino, BC, and from Paris to Kathmandu. Major broadcasters and online outlets are programming a wide variety of titles supporting the celebratory theme to ensure that everyone who wants to participate in NCFD has access to a great Canadian film. Presented by REEL CANADA with support by the Government of Canada, NCFD is a coast-to-coast-to-coast celebration of Canadian film. Watch our trailer:

This year’s theme — celebrating 100 years of Canadian cinema — was prompted by the centennial of Canada’s first genuine blockbuster, and oldest surviving feature film: Nell Shipman’s BACK TO GOD’S COUNTRY, a sassy, snowy adventure story that remains Canada’s most successful silent film. REEL CANADA’s executive team and staff came together to curate the “Spotlight 100”, offering a selection of films that are equally chock-full of snow and sass!

NCFD is a one-day celebration of Canadian film that everyone — regardless of where they live in Canada (or worldwide) — can participate in, for free. There are three easy ways to join the fun:

“There is no question that Canada produces outstanding, internationally recognized work that reflects our distinct cultural identity,” said Sharon Corder, Artistic Director, REEL CANADA. “We really had a lot

of fun this year — as a team, looking back over the past 100 years of Canadian cinema to develop our Spotlight 100 list of films.”

“NCFD attracts an audience from a wide-range of ages and backgrounds and I can say without a doubt there is something for everyone to participate in National Canadian Film Day,” added Jack Blum, Executive Director, REEL CANADA.

This year, in a special partnership with Revera Retirement Living, there will be screenings in 136 seniors’ residences across the country.  Three of these will feature special guests:

NCFD is a huge endeavour that’s made possible through the efforts of dedicated sponsors and partners who continue to support us year after year, including the Government of Canada, Telefilm Canada, Cineplex, TD, Netflix, Encore+, Bell Media, Landmark Cinemas and CBC. View a full list online of our sponsors and supporters.

REEL CANADA is a non-profit, charitable organization that promotes the diversity of Canadian film and its power to spark important conversations about what it means to be Canadian. Through our three core programmes — Our Films in Our Schools, Welcome to Canada and National Canadian Film Day (NCFD) — REEL CANADA has reached hundreds of thousands of high school students, new Canadians, and general audience members.