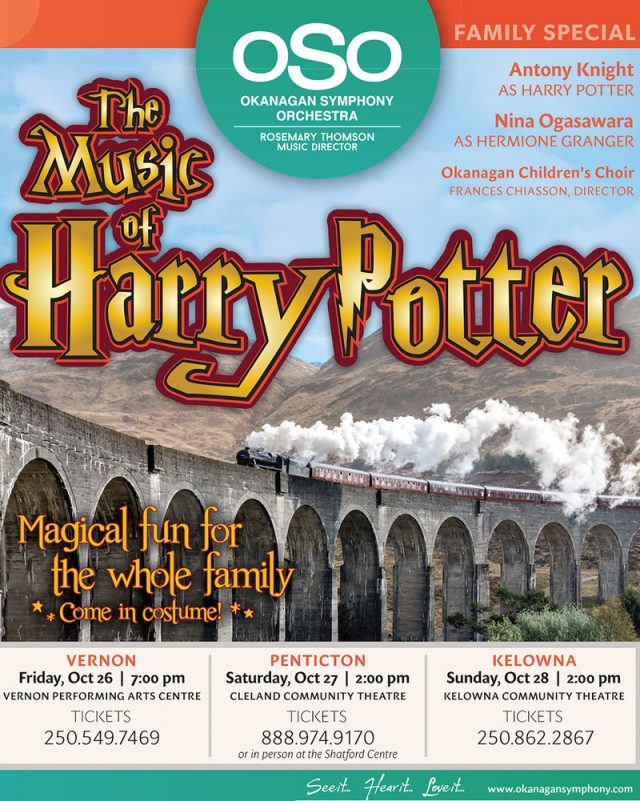 The Okanagan Symphony Orchestra presents
The Music of Harry Potter

(Kelowna, BC, October 17, 2018)
The OSO is excited to bring the magic of the music of Harry Potter to the Okanagan.

Harry, Hermione, Ron, and all the characters at the Hogwarts School of Witchcraft and Wizardry need little introduction. Since the 1997 release of the first novel, Harry Potter and the Philosopher’s Stone, the books have found immense popularity, critical acclaim and commercial success worldwide. The original seven books were adapted into an eight-part film series, since making Harry Potter one of the highest-grossing media franchises of all time.

Part of the magic of the movies is, of course, the music. John Williams received Grammy and Oscar nominations for his work on the first three films. This performance will feature a selection of his works from The Philosopher’s Stone, The Chamber of Secrets and The Prisoner of Azkaban.

Bringing the world of Harry to life requires a few more elements, beginning with the characters themselves. We are thrilled to welcome several local actors to our stage who will be performing readings based on the story series: Antony Knight as Harry Potter and Nina Ogasawara as Hermione Granger. Also joining us on stage will be Frances Chiasson, directing the Okanagan Children’s Choir.

OSO Music Director Rosemary Thomson says, “I love Harry Potter, the books, the movies and most of all the music. John Williams’ score brings all of the characters to life in the most magical way. I can’t wait for this show.”

Taking place the weekend before Halloween, the OSO encourages patrons to come dressed as their favourite Harry Potter characters. There will be fun photo opportunities in the lobby before each performance, with proceeds going to support the OSO’s Education programs.

Special ticket pricing is in effect for these family shows:
$20.50 for adults, $17 for seniors and $12.50 for students.
(prices do not include local ticketing fees and tax)