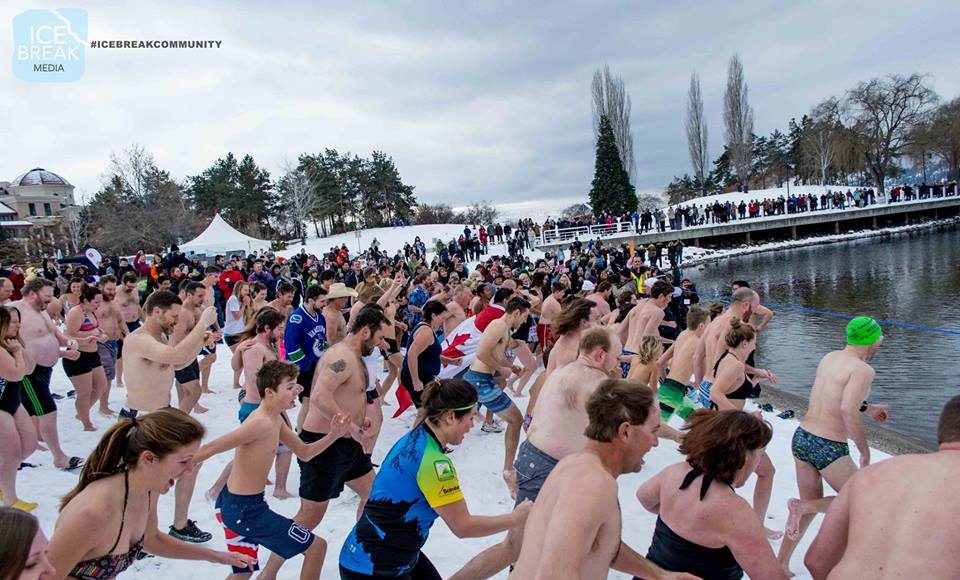 Do you know how to cure a New Year’s Eve hang over? Take the Polar Bear Plunge! There’s no better way to freeze out that hang over then to take an ice bath with hundreds of others in Okanagan Lake on New Year’s Day.

Lucky for you, there are plenty of polar bear plunges happening across the Okanagan.

The water temperature sits around a balmy six degrees Celsius or colder this time of year which is perfect for polar bear swims.
Dare a friend, dare yourself. Take the plunge and help a really good organization at the same time. Here’s where you can become a polar bear in the Okanagan.

Join the crazy masses for the fifth annual CRIS Kelowna Polar Bear Dip 2019 at Tugboat Bay (by the Dolphins downtown) on Jan. 1. Dip by donation. Bring $2, $5 or whatever you have to help raise funds for CRIS Adaptive Adventures Society.
Fun starts at 1 p.m. with lots of food trucks, music, T-shirts and toques sales and more. The Polar Bear swim takes place at 2 p.m. sharp.

“We are hoping to get that many people out this year. Last year, the temperatures were around -3 or -5. There was a lot of snow so that was an added challenge for people getting down to the lake,” she said.

But the snow and freezing temperatures didn’t deter the dippers who happily ran into the lake, some even dipping their heads under the water and going for a full swim.

While Dawn herself has dipped most years, Davis Yates is the original Kelowna dipper, she said.

“Davis is one of the original co-ordinators of the dip. He was a UBCO business student when he came up with the idea for the dip as a fundraiser for CRIS Adaptive Adventures,” she said. “He’s dipped every year.”

CRIS Adaptative Adventures is a local non-profit that prides itself on breaking down barriers that people with disabilities face when accessing the great outdoors. They offer adaptive hiking, cycling, kayaking, snowshoeing and Nordic skiing adventures for people with any kind of impairment.

Show your excitement for the event with the hashtag #crispolarbeardip.

Pentictonites also love taking the plunge. This time, a fundraising component has been added.

This is the first Hunger Dip: Polar Plunge, raising money for the Salvation Army food bank. But this isn’t the first time the people of Penticton have done the polar bear swim. These zany folks have been jumping into both lakes on New Year’s Day for years, even if they have to break a little ice to get in.

Everyone young and old are encouraged to take the plunge at noon at Sudbury Beach at Skaha Lake, right at the junction of Highway 97 and Skaha Lake Road. To be entered into the prize draw, you must pledge $20 which goes to the food bank.

Summerland Is Where It All Started

If you really want to know where the hardcore polar bears are – it’s in Summerland. Come snow, ice and wind chills of -15, Summerland Kinsmen have hosted the Polar Bear Dip at Sun-Oka Beach in Trout Creek for 33 years.

And each year, no matter what the weather, over 100 die-hards and newcommers show up dressed in crazy costumes and crazy team names like the Boa Constrictors to take the plunge. This year’s dip by donation starts at noon sharp. The Summerland Kinsmen will have fires going on the beach to warm dippers up, as well as hot chocolate and hot dogs. They have prizes for best team, best costumes and oldest and youngest dippers.

Last year, the lake was hovering around zero degrees and 85-years-old Tom Reilly once again took the plunge, according to last year’s stories. Buy a dippers T-shirt. All proceeds go to families and community projects.

In Peachland, celebrate 2019 with a splash and dash into Okanagan Lake, across from the community centre, starting at 1 p.m. Peachlanders are the same zany people who host a swim to Rattlesnake Island and back. If you are planning to dip, register in the community centre first.