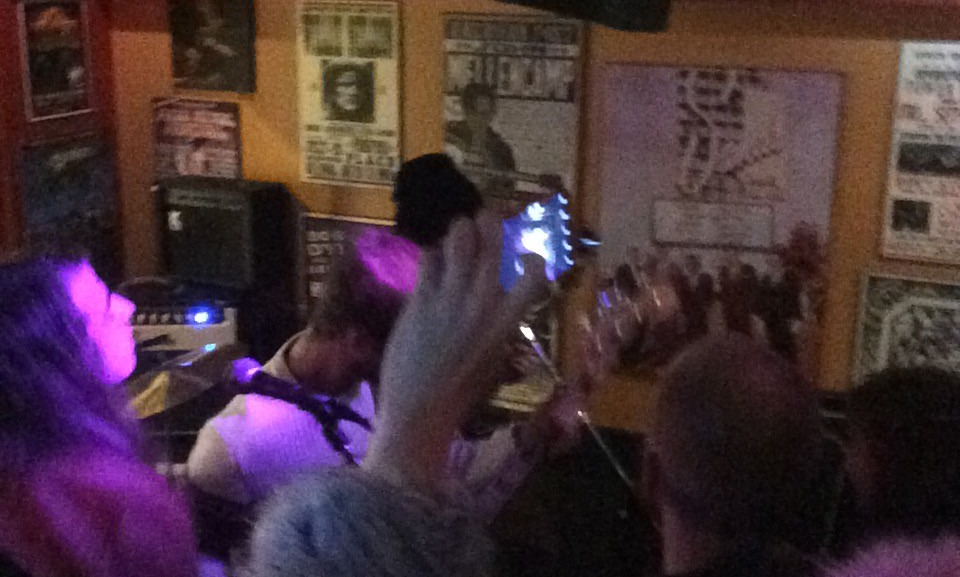 Saying goodbye to the Grateful Fed and their jam nights

At ten P.M. on a Wednesday (Dec 12. 2018), The Grateful Fed is packed. It is the second to last jam night. The dense crowd here has known each other for years and has been making loud awesome noises together for just as long. So many folks are here that it’s difficult to slog thru the crowd to the back of the tiny room. The beers are flowing fast and loose like the wild basslines and howling guitar licks coming from the humans on stage. This disorganized glory is sadly coming to a close – The Grateful Fed is closing its doors for the last time on Christmas eve. People have gathered here in happy pre-emptive nostalgia. So many great collaborations have started here because it has been a supercharged incubator for Kelowna’s underground music scene.

It’s a Jam Night, and the Stephen Kubasek is dutifully in charge of the gear and time limits. He also can play your face off on any instrument he brings to share. The somewhat flexible rule is 3 songs for each act on stage. One of the things we love about this weekly event is that it’s so well attended by so many musicians that play shows around the Okanagan. Right now Skrum Bucket is screaming their way to victory – Sarah Bee (Crowjo) and Brian Looney(High horse, the Volunteers, behemoth sleeps, etc), and Teagan Ramage,(Highland Eyeway). Other people who performed at this 2nd to last jam night include Sam Bainbridge, Max Dejong and Vince of the act A Cosmic Microwave Pickle, Apollo Agua, Pam, Jarvis, Garrett Scatterty & Ike Balson. Other folks I didn’t have a chance to connect with also performed. For years, the people involved in various touring acts have stopped by and played mini sets as a way to spread the word and connect with the musicians that reside here in Kelowna. The Rock & Roll vibe that permeates the place makes for a fun kind of rebellious almost anything goes attitude. That’s part of what makes people stick around, they wanna see where the thing will go!

Ryan Abougoush is behind the bar with Ayla and the rest of his staff. They are serving freezing beer to the sweaty crowd. They’re the prodigiously thirsty 20-30 something rowdy crowd, having fun at the end of an era. The smokers outside smelt like tobacco just as much as sensimilla. An overworked sound system thumps its way into the collective consciousness People rabidly clap and howl and clap for more as the impromptu band rises and falls with the jam that’s in the air. The band dissipates and new blood comes to the stage.

Christian Jarvis takes to the stage and hammerclaws that banjo of his, and as old folk tunes ring forth, two chicks have a fist fight outside. It ends in tears for one, who leaves in a taxi with a friend. I see the other one pull a painted fake fingernail from her hair, as she sips a beer and nurses a bruising eye. Such a sight is rare, comical, unwelcome and unfortunate. It reminds me of something that would happen in the times that bluegrass came from. I heard a beer advert on a podcast the other day, and the disclaimer at the end just said “drinking alcohol involves risk.” I guess that’s the “risk” they talk about. They shut down at 12:30 or so, but savvy folks in the crowd kept their seats for a bit after that. I Left shortly after that: and that’s the end of the first in this series on the grungy belly of the underground music scene.

It’s packed like sardines again at 8:30, and the music starts with Two Steves and a Ryan. It’s a momentous jam because Stephen Kubasek on bass has been leading the jam for 5 of the last 6 years or so and Steve Gosselin had been running it for a number of years before that. They started with Sublime’s “What I got”- so everyone started the night by shouting about love, which was great. So the party vibe hit its stride early, and was cookin along nicely. Lots of the tables had been removed to make space for the prodigious crowd. Everyone danced and drank and chatted happily as act after act went on stage. Many performers each completed their final show in this tradition of messy compromise. There was a tremendous feeling like we had learned something about music, and more importantly about how to be in community with each other. Some folks gave drawn out expressions of thanks to the Greatful Fed and Ryan Abougoush and the organizers and support people involved with the weekly event.

One Jammer says, “ I’m gonna miss this, getting up on stage and not knowing [what’s] happening!”

The bartendress, Ayla, says that this has been one of her favorite events to work because of all the great people that come to hang out.

One of several so called “last jams” felt mystically appropriate, because it was so mournful- “Ain’t No Sunshine when She’s gone”.

After he put down the guitar on that last jam he led, Kubasek said “Mission Accomplished.”

As the few Remaining folks gathered into a circle, Ryan Abougoush said, “ Without all you wonderful musicians, this place would just be tables and chairs.”

I felt sad as I walked home sometime after 2, but rumours of a continued electric Guitars and bass and full drums jam have my hopes up.