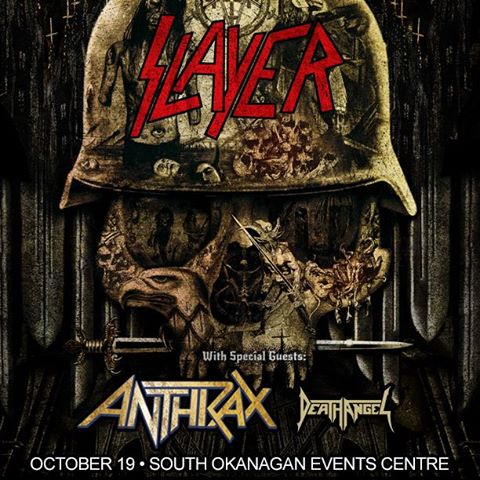 SOUTH OKANAGAN EVENTS CENTRETickets on sale Friday, May 13 @ 10:00AM

Penticton, BC – Slayer, with special guests Anthrax and Death Angel, will join forces this fall for a seven week North American beat down. The dates start in Cleveland on September 9 and will hit both major and secondary markets across the continent, including the South Okanagan Events Centre in Penticton, on Wednesday, October 19. The Slayer Fan Club Presale starts Tuesday, May 10, and the general on-sale begins this Friday, May 13 at 10:00AM local time. For all ticket purchasing and VIP packages details, log onto http://slatanicwehrmacht.com.Said Slayer’s Kerry King, “It’s always super fun for us to tour with Anthrax. Frank is one of my best friends in the biz!! Put that together with Death Angel, and fans will probably see the best package this year. See you there!”Fans will hear their favorite Slayer songs from the band’s 30-year plus discography, as well as a few of the newer songs from Repentless, named “The Metal Album of the Year” by Guitar World. Slayer and Anthrax stormed through Europe together last fall, amassing a string of sensational live reviews, so North American fans, this will be a night of metal music that should not be missed.”We are very excited to tour again with our fellow Kings Slayer on a thrash/metal extravaganza,” said Anthrax’s Charlie Benante. “Two of the Big Four – now that’s a night of metal for all the Kings and Queens!”Added Mark Osegueda from Death Angel, “We are thrilled and honored to be part of this amazing North American touring package. Slayer/Anthrax/Death Angel – it just looks, sounds and feels right. This will be Death Angel’s first-ever tour with Slayer, something we’ve hungered for our entire career. And we will bring that hunger to the stage every night, so get there early because this will be a show not to be missed; from the first note of the night until the very last! Metal is alive, hungry, thriving, and coming for you!” Power 104  presents Slayer with special guests Anthrax and Death Angel at the South Okanagan Events Centre in Penticton on October 19. Tickets are $69.00, and $79.00* and go on sale on Friday, May 13 at 10:00AM PST. Tickets can be purchased in person at the Valley First Box Office at the SOEC or the Wine Country Visitor Centre, by phone 1.877.763.2849 or online at ValleyFirstTIX.com.

ABOUT SLAYER:  (www.slayer.net)For more than three decades, Slayer’s onslaught has proven the band to be the supreme thrash-metal band on the planet, the band that other heavy acts are measured against and aspire to. The two-time Grammy-winners have also accumulated an abundance of certified Gold Albums along with “Best…” awards from media outlets all over the world, including Kerrang!, SPIN, Metal Hammer, Revolver, and Esquire. Throughout Slayer’s history, the band has never faltered in unleashing its extreme and focused sonic assault, and, unlike many of its contemporaries who “commercialized” their sound, Slayer has remained crushing and brutal, steadfastly refusing to cater to the mainstream. Slayer’s founding member, guitarist Jeff Hanneman passed in 2013, and Exodus guitarist Gary Holt has been filling in for him since. Paul Bostaph, who was Slayer’s drummer from ’94 – ’01, has rejoined bassist/vocalist Tom Araya and guitarist Kerry King, and is back behind the kit.In September 2015, Slayer released Repentless, the band’s 12th studio album, the first without Hanneman and first with producer Terry Date, to widespread rave reviews and the highest chart debut of the band’s career. The band also teamed up with director BJ McDonnell for two high-concept and brutal music videos for the album’s “Repentless” and then for “You Against You.”Slayer’s Press Assets SiteABOUT ANTHRAX:  (www.anthrax.com)In 2016, Anthrax is celebrating its 35th anniversary as a band with the release of one of the year’s most-anticipated metal/thrash albums, For All Kings, (February 26, Megaforce in North America/Nuclear Blast internationally).   The eleven-song crusher that the band’s drummer Charlie Benante has described as “aggressive and super-thrashy,” was written by Benante, bassist Frank Bello and rhythm guitarist Scott Ian, the dynamic triumvirate whose unique composition chemistry is, in part, what sets Anthrax’s music apart from other bands’ in the same genre.  Add to that Joey Belladonna’s breathtaking vocals and the searing guitar leads by newest member Jonathan Donais, and it’s no wonder the band has been so excited about its 11th studio album.  The track “Breathing Lightening,” currently a Top 40 track at rock radio, with its made-for-radio, classic Joey Belladonna melodic, hooky vocals, is Anthrax at its best.  Check the song out here:  https://www.youtube.com/watch?v=rKh2Hb7mcU0Over its 35-year career, Anthrax has been a pioneering band with its unique style, sound and heavy brand of thrash metal, and, as Metallica’s Kirk Hammett put it, “one can hear their influence on any number of up and coming bands.” The band has sold in excess of 10-million units, received multiple Gold and Platinum certifications, six Grammy nominations and a host of other accolades from the media, industry and fans.  From the race and genre barriers Anthrax helped break down in 1988 when they collaborated with Public Enemy on “Bring The Noise,” to becoming a card-carrying member of The Big Four – with Metallica, Slayer and Megadeth – as one of the four bands that defined the speed/thrash metal genre, to being the first metal band to have its music heard on Mars when NASA played “Got The Time” to wake up the Mars Rover, Anthrax continues to demonstrate it’s just all about the music.Anthrax Press Assets SiteABOUT DEATH ANGEL:  (www.deathangel.us)Three decades into their celebrated career, Death Angel remain as hungry as ever. As a result, uncompromising urgency and unpredictability define the Bay Area thrash quintet’s eighth full-length album, The Evil Divide [Nuclear Blast]. The group—Mark Osegueda [vocals], Rob Cavestany [lead guitar], Ted Aguilar [guitar], Will Carroll [drums], and Damien Sisson [bass]—satiate the appetite for buzzsaw speed riffs, double bass mayhem, and scorching vocals over the course of ten new anthems. The Evil Divide stands out as the culmination of thirty-plus years of music for Death Angel. It kicked off with legendary debut, The Ultra-Violence, in 1987. The classic Frolic Through The Park began to cement their legacy and even earned the distinction of landing on Loudwire’s list of the “Top Ten Thrash Albums NOT Released by The Big 4.” The group broke up following 1990’s Act III only to reunite in 2004 on Art of Dying for the next generation.Death Angel will release their eighth studio album, The Evil Divide, worldwide on May 27, 2016 via Nuclear Blast Records. The album was recorded once again at AudioHammer studios in Sanford, Florida with producer Jason Suecof (Trivium, Deicide), who previously worked on 2010’s Relentless Retribution and 2013’s The Dream Calls For Blood. Mastering duties were handled by Ted Jensen at Sterling Sound in New York City. Artwork was created by tattoo artist Bob Tyrrell.