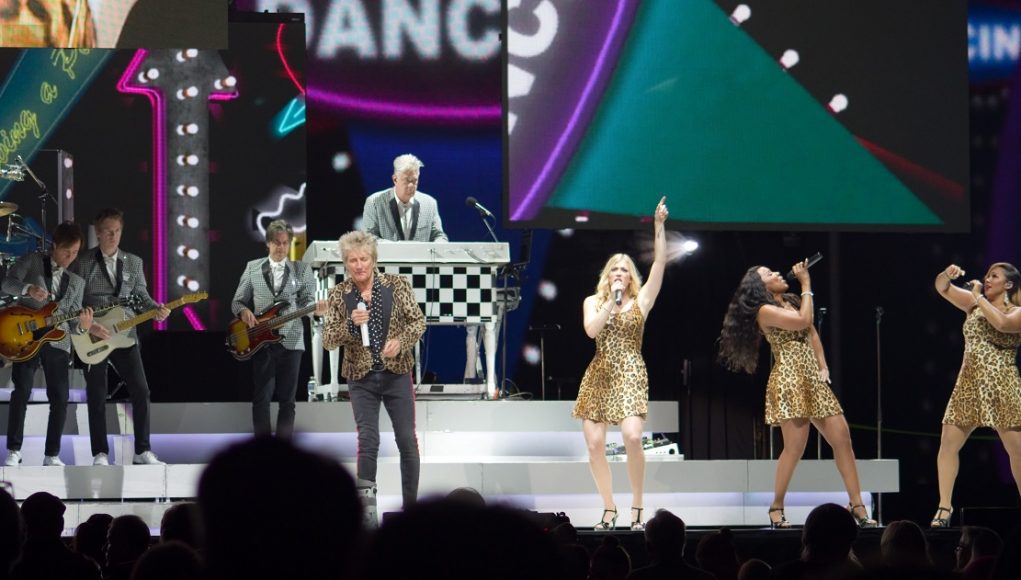 Thursday night Kelowna’s Prospera Place was visited by Rock Royalty, when legendary Sir Rod Stewart took to the stage. At 7:30pm promptly the checked black and white curtain went up and the band began warming up the crowd with a rollicking edition of the 1967 Bar Kays classic Soul Finger while images of charging elephants played on the a multi-screen backdrop.

Stewart’s amazing band was gorgeously dressed in 50’s style suits. The three female backing singers and two female multi-instrumentalists wore dresses in his signature leopard skin. It was an energetic beginning that became even more charged when Sir Rod took to the stage and began singing his 1984 hit Infatuation.

Despite an injured foot—a hairline fracture from playing football with his young son—which made him hobble, the spiky-haired raspy-voiced singer was enthusiastic. At seventy-three years old he has the authority of the a seasoned performer but the energy of a much younger man. From the start it was clear he was in command.

Though never traditionally handsome, he’s roguishly charming, and listening to his relaxed chatter with the audience it’s easy to understand why he’s known as a lady’s man (He’s been married three times and is renowned for his liaisons). Before the show many of his female fans lined up to have their photo taken with his life-size photo. They were dressed for their favorite Londoner in tee-shirts and hoodies adorned with his photograph, his lyrics, and of course lots of leopard skin. The audience was intergenerational with quite a few mothers and daughters in attendance, as well as groups of women and couples in their forties, fifties and sixties.

His voice has not faded. He sounded just like he once did on vinyl. The night was filled with iconic songs that for some defined their youth: Maggie, first recorded in 1971; Forever Young from 1988; and the 1991 hit Rhythm of My Heart which he dedicated to those serving in the military. There were many poignant moments. He spoke about his ballad, The Killing of Georgie and how when it was released in 1976, the BBC refused to play it because it talked about being gay. He also shared what being knighted meant to him and dedicated his version of Curtis Mayfield’s People Get Ready as an anthem of hope.

It’s challenging to pick a standout song of the evening. The consummate performer, he packed the two hour long concert with career spanning chart-toppers and performed each with gusto. All in spite of having to sometimes rest on a stylish white leather stool because of his foot. Still he danced, even thrilled the audience with his signature bum wiggle. When he sat, his three female backing singers and two female multi-instrumentalists moved for him. They were incredibly versatile. They did everything from step-dancing to high-kicking. Their version of the Tina Turner’s Nut Bush was fabulous.

The final homestretch, usually marked by Rod kicking several footballs into the audience but on this night thrown, due to his injury, included the Face’s tune Stay with Me, and a disco-driven version of his 1978 Do You Think I’m Sexy. At the finale hundreds of balloons dropped on the adoring audience. It was an epic evening, with two fabulous encores. No matter how many concerts Kelowna music-goers enjoy this season, few performers will ever outrank royal Rod.