Home Events Not to be Missed Mixoff of Okanagan Spirits 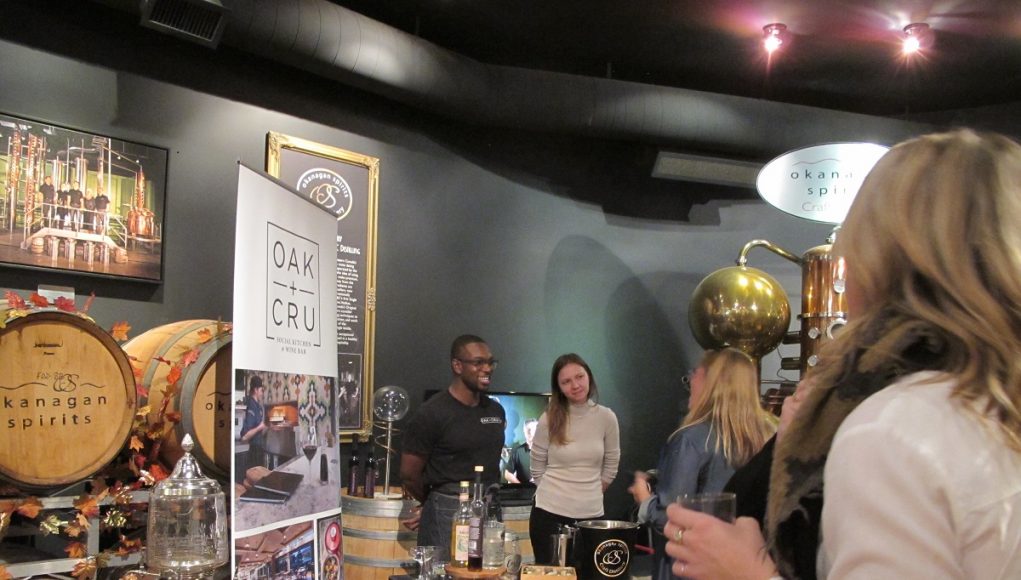 Not to be Missed Mixoff of Okanagan Spirits

If the preview is a flavour index of what to expect this year as local bartenders ‘Mixoff’ with Okanagan Spirits Craft Distillery on November 8, set your taste buds for one enchanting evening.

Heaven forbid if you’re not familiar with it, Okanagan Spirits Craft Distillery offers a farm-to-flask selection of more than 25 internationally awarded spirits ranging from BC’s first single malt whisky to gins, vodkas, liqueurs, fruit brandies and even Aquavit-style and Absinthe-style spirits. Established in 2004, it is Western Canada’s oldest craft distillery and was born through the idea of using 100 per cent locally grown fruits and grains.

Held at the Kelowna store, the preview started with a delightful cocktail made by staff at Okanagan Spirits, which was a good reminder that the distiller sets the bar high for the competition. It included Okanagan Spirits Gin, Blackberry Liqueur, and Mint.
The mixologists weren’t about to share all their trade secrets for the big event, however, we got sneak sips of what can be anticipated at The Laurel Packinghouse.

Tyler Dyck, CEO, Okanagan Spirits, “While the event has grown over the years, what you can expect is the participating mixologists to create innovative cocktails using 100 per cent locally crafted spirits. Plus, some of the best chefs in the region will present great food to pair with those cocktails.”

Tickets are available at www.okmixoff.com and include 10 different cocktails paired with 10 tasty treats, and there’ll be chips and salsa, ice cream and coffee. You not only get to taste and enjoy the cocktails and complementary snacks, you’ll hear from the judges which are deemed the winners. You’ll get to judge, too, as part of the People’s Choice Award for Best Cocktail and Best Bite. All of this and live music to accompany it.