Home Events Rockin’ out on Rowcliffe 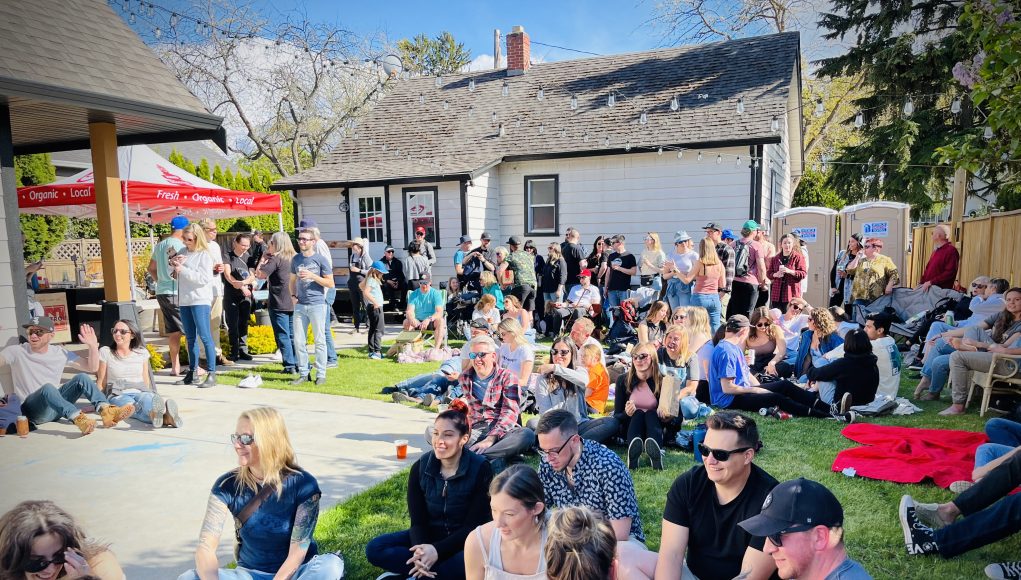 The spring weather of 2022 has been having some sort of bipolar tantrum as of late. The sun will arrive but the cold, sharp winds that come up every afternoon thwart the chance for the inhabitants of this fair valley to shed the long sleeves and soak up the sun.

Soon enough, that sunshine turns to cool, gloomy skies, threatened by heavy, bloated clouds that come parading along every afternoon. Sometimes it rains. Sometimes it only threatens.

When I heard of the backyard bash that Kelowna’s ruckus rockers, LUCKY MONKEY, was putting on, I had to check the weather forecast. When I did, I was rolled over by a wave of skepticism. The forecast was typical of a May Long weekend.

Gloomy predictions were looking back at me from the screen of my phone. I had doubts and when I woke up on that Saturday morning, I saw large, cumulonimbus clouds bulking up beyond the mountains. As my morning blossomed, so did those clouds. I had a photo gig close to home. I decided on walking to the event and I put on my rain jacket just in case. Those clouds had turned into behemoth thunderheads, bloated and black, heavy with rain. I had a feeling that those clouds might dump and soak the town and potentially, ruin the block party all together.

I went to my photo gig and before long, I was finished and was elated to see that those threatening clouds had dissipated and were out of sight, no longer a danger for the good times planned for the party. As fate would have it, they seemed to take that cold wind and gloom with them and the sunshine was left to soak us all in its warmth and it was only 4:00pm.

I raced home, changed, grabbed my girlfriend and we hopped on the bikes. A quick toke and a beer for the road, we made our way over to Rowcliffe Ave; a lovely, quaint street downtown Kelowna that used to host a block party that shut the entire road down and would host music, local artisans and vendors and would be a party that would see hundreds of visitors in a single afternoon. That was before the pandemic. Now, it will be reduced to a single house and its small backyard, but as we pulled up we could hear music blasting from behind the small house and its fence.

A throng of smiling, beautiful people were in attendance. A small tent was set up where beer was pouring from its faucets. Beer by donation. Three words that put a smile on my face, I ordered two and joined some friends on the lawn.

Beautiful women were everywhere and DAN HARDEN was just beginning his set. He set the tone with his comedic style of songwriting. He rocked the crowd with a summertime groove. There were kids and dogs and a real family vibe going on.

DEVON COYOTE took the stage next. He hasn’t lost his touch at all. I’m a few beers into the event now as the soothing sounds of Devon’s slide guitar fill the sunny skies overhead.

HOT SAX are a relatively new ensemble, composed of four prolific musicians, including NILS LOEWEN, one of my favorite stand up bassists. Anyone who can cover TOM WAITS like Nils can, he’s a talent I always look forward to seeing live. These guys really got the crowd moving. I like sitting on a lawn, watching live music but hearing that saxophone mix with the sultry sounds of summer, well, I was up off my ass and dancing in no time.

I’m not sure how to pronounce the next band but I’m guessing it’s pronounced (sick) S.I.I.K are a young, local quartet harnessing a kind of rock that my ears absolutely love. They have a sound reminiscent of 90’s punk rock thrash with the new age prowess of youthful noise. I will keep my eyes and ears open for these guys as the summer unfolds and I recommend you do too, dear reader.

As the sun set and the night wrapped itself around the voluptuous treetops that line Rowcliffe, LUCKY MONKEY took to the stage and cut the night with an electric thrust. If you haven’t seen this crew before you’re truly missing out. Not only can they melt your face with the heavy guitar riffs and fat bass lines, but frontman and home owner of the event, KASSIDY RRITZUK, wearing his trademark bowler cap, controls a crowd with a charisma unlike anyone else. And of course, there’s Josh on the drums, keeping time to it all.

Back in the day, Kelowna used to host another small event. KELOHA was a music festival right downtown and on the beach. I used to think that seeing live music while floating in the water was the best way to enjoy a live show but, after an evening of music and an afternoon of much needed sunshine, the backyard bash definitely has my vote. It was a respectful moment of the live music movement. The yard wasn’t trashed. Cans were placed in the appropriate bins. People treated one another with respect and even the neighbors came to rock out with the bands.

When DAN MANGAN came through Kelowna a few weeks prior, he mentioned something called SIDE DOOR, an airbnb kind of approach to potential music venues. Anyone can sign up. If you have a backyard or a basement that can host a show, SIDE DOOR is a potential answer to meeting the overwhelming demand for live music here in the age of 2022. So many bands who are eager to hit the stage. So few stages to hit. Especially here in Kelowna.

It was truly a revival of rockin’ out on Rowcliffe and I hope that we can see it unfold again sometime soon. The backyard live show is one to experience and it gives me a renewed hope for all the music to come as the year unfolds. From here on out, I hope the weather remains warm, the music is played loud and good times can be found beneath the trees of a backyard near you.