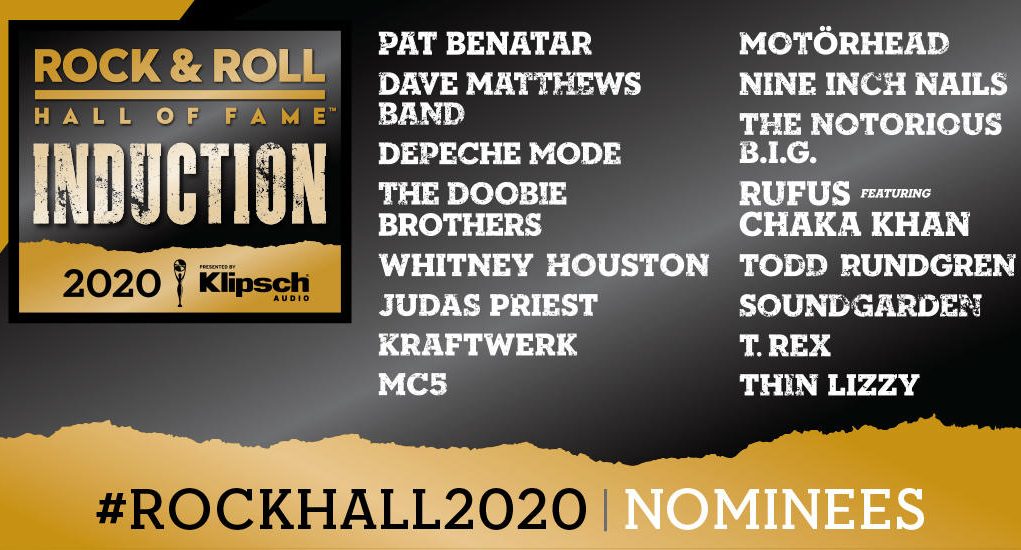 The Rock & Roll Hall Of Fame foundation was established April 20th, 1983, by the late Ahmet Ertegun, founder and chairman of Atlantic Records. The museum itself, in downtown Cleveland, documents the history of rock & roll music and those who have influenced its development. Each year, small groups of individuals are inducted in various disciplines- artists, engineers, producers, and so on.

Each year when the list of nominees is released there are grumbles of dissention far and wide, questioning the R&R hall of Fame’s motives. Are they more concerned with selling tickets to the induction ceremony each Spring by inducting hip-hop, rap and R&B artists? Are they trying to appear relevant to a younger demographic? After all this is the Rock & Roll Hall of Fame… why does the list of inductees include people who are clearly not rock artists?

That this casts a shadow on the Hall’s validity and relevance is obvious and reeks of business rather than artistic decisions- just ask Steve Miller what HE thinks. The debate begins anew every fall when the list of nominees is released, so let’s go through the list for the class of 2020 for a closer look. The main criteria is that an artist must have released their debut album at least 25 years prior.

PAT BENATAR: She’s a rock & roll warrior, with a dozen albums under her belt. With songs like Heartbreaker, Hell Is For Children and Love Is A Battlefield, she should be a shoo-in.

DAVE MATTHEWS BAND: Pretentious and arty. I like some of their tunes but I think this nomination is to please the hipsters. Pass.

DEPECHE MODE: An electronic pop band, calling them rock & roll seems a bit of a stretch.

THE DOOBIE BROTHERS: They started out as a Hell’s Angel’s house band and released some great tunes in the 70’s… that is before Michael McDonald joined and they got kind of ‘pussified’. Based on China Grove alone, I say they’re in.

WHITNEY HOUSTON: Just because she’s dead? Oh come on Rock Hall, you can do better than that. She was a gifted singer, but certainly not a rock & roller. I vote no.

JUDAS PRIEST: Their leader singer is known as “The Metal God”, they owned the 80’s, and they still release thrilling music. If they don’t get in I’m going to track down Jann Wenner and take a dump on his desk. Priest is in my headphones as I type this.

KRAFTWERK: Quirky Kraut Rock. Not my glass of beer but sure, why not?

MOTORHEAD: They should be in already. Their initial nomination for the class of 2020 only included Motorhead’s most famous lineup of Lemmy, Fast Eddie Clark and Phil Taylor, who are all dead. It was pointed out to the Hall that guitarist Phil Campbell and drummer Mikkie Dee were the longest serving band members aside from Lemmy, so their nomination has since been amended. This is a slam-dunk if there ever was one.

NINE INCH NAILS: Though I never got the fuss about these guys, Trent Reznor’s music has affected a lot of people. Plus, when Trent heard Johnny Cash’s version of Hurt he said “it’s not my song anymore, it’s his.” Let ‘em in.

THE NOTORIOUS B.I.G.: Oh fuck off.

TODD RUNDGREN: As an artist his impact hasn’t been overly huge. As a producer he was behind the board for Meat Loaf’s breakout Bat Out Of Hell and Grand Funk Railroad’s We’re An American Band, so I’d welcome him in on that basis. Plus, he was Liv Tyler’s step-dad.

SOUNDGARDEN: Chris Cornell’s suicide aside, they were a crucial part of the grunge scene that came roaring out of Seattle in the 90’s. Black Hole Sun, Fell On Black Days, Rusty Cage– ‘nuff said. They belong in the Hall.

T. REX: Marc Bolan, another rock & roller died before his time, but his girlfriend was driving so it’s her fault. I’m on the fence; his only international commercial success was Bang A Gong from Electric Warrior but it’s follow-up, 1972’s The Slider is a GREAT record. If you’re going to throw glam-rock fans a bone, this one will do.

THIN LIZZY: Great songs, great band, Phil Lynott was the real deal. Even 43 years after the release of Jailbreak, their 6th album, when The Boys Are Back In Town comes on the radio I turn it up and drive faster. It’s one of those rare songs that just never, ever gets old. Like Motorhead, a slam-dunk.

Though inductees are voted in by The Rock & Roll Hall Of Fame themselves for the most part, the public can take part in the official 2020 Fan Vote to support their favorite nominees and have their voices heard. You have until January 10th, 2020 to vote, and you can select up to 5 nominees daily. I just took a peek at the website, and as of this writing Pat Benatar is leading the way with over 208,000 votes. The MC5 are currently in last place with 39,437 votes.

For more info or to cast your votes, go to rockhall.com… and may the best bands win.