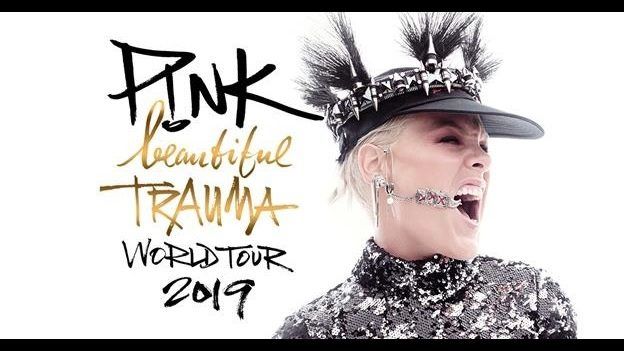 New Anaheim and Los Angeles Dates Added Due to Demand

Produced by Live Nation, the critically acclaimed tour has been lauded by fans and critics alike for P!NK’s spectacular physicality and powerful vocals. The trek resumes on March 1, 2019 in Fort Lauderdale, FL, and will make stops in Nashville, New Orleans, San Antonio, Los Angeles, and many more before wrapping on May 21, 2019 at Madison Square Garden in New York City.

Additionally, due to unprecedented demand, the Beautiful Trauma World Tour is adding two California dates for fans to experience her showstopping performance. P!NK and special guest Julia Michaels will visit the Honda Center in Anaheim on April 13 and STAPLES Center on April 15.

U.S. and Canadian residents who purchase tickets online will be able to redeem (1) physical copy of P!NK’s new album “Beautiful Trauma”. All albums must be redeemed by the end of the tour in May 2019.

Already one of the most celebrated songwriters in the music industry, Michaels leapt into the spotlight as a solo artist in 2015 with her triple-platinum selling debut single “Issues.” She went on to be nominated for multiple GRAMMY® Awards in 2018 including “Best New Artist” and “Song of the Year” for “Issues” which has garnered over 1 billion streams worldwide.  Prior to becoming a popstar in her own write, Michaels co-wrote smash hits including Justin Bieber’s “Sorry,” Nick Jonas ft. Tove Lo’s “Close,” Selena Gomez’s “Hands To Myself,” and countless others.

About P!NK
Since her debut in 2000, P!NK has released 7 studio albums, 1 greatest hits album, sold over 50 million albums equivalents, over 75 million singles, over 2.4 million DVDs worldwide and has had 15 singles in the top 10 on the Billboard Hot 100 chart (four at #1). In addition, she is the recipient of three Grammy Awards (19 nominations), one Daytime Emmy Award, three Billboard Music Awards, seven MTV Video Music Awards (including the 2017 Michael Jackson Vanguard Award recipient), two MTV Europe Awards, two People’s Choice Awards, was named Billboard’s Woman of the Year in 2013 and has sold out arenas all over the world.  Her seventh studio album, Beautiful Trauma is certified platinum, debuted at #1 on Billboard’s 200 chart and marked a career high for first week sales.  Additionally, the album debuted at #1 in 10 other countries, on Billboard’s Top Album Sales Chart and Digital Albums Chart. The first single, “What About US” is also certified platinum, received a Grammy nomination for Best Pop Solo Performance and reached #1 on the Adult Pop Songs chart earning her ninth leader on the chart, the most number-ones at the format for a female (second overall).

P!NK is a huge supporter of various charities, including: Make a Wish Foundation, Autism Speaks, Human Rights Campaign and No Kid Hungry.  She remains on the UNICEF team as an Ambassador.  She recently graced the cover of People Magazine’s The Beautiful Issue.

About Julia Michaels
Since emerging in 2015, JULIA MICHAELS has transformed the pop music landscape not only from behind-the-scenes as one of the most in-demand songwriters, but in the spotlight as a solo artist as well. Her rapid rise can be attributed to identifiable honesty in every lyric, as exemplified in her triple-platinum selling debut single “Issues”. Within just a year since arrival, she garnered 2018 GRAMMY® Awards nominations in the categories of “Best New Artist” and “Song of the Year” for “Issues,” which also cracked 1 billion streams worldwide. Continuing that success, “Issues” notably became “the top-selling debut single by any artist in 2017,”and placed as the only solo female composition on Variety’s “30 Most Consumed Songs of 2017.” At the same time, MICHAELS received nominations in top categories at the American Music Awards, Billboard Music Awards, Teen Choice Awards and RDMA’s to the MTV VMAS and MTV EMAS.

Prior to making her debut as a solo artist, JULIA became one of pop music’s most in-demand songwriters, co-writing a string of Billboard Hot 100 hits alongside Justin Tranter including smashes like Justin Bieber’s “Sorry,” Nick Jonas ft. Tove Lo “Close,” Selena Gomez’s “Good for You” [feat. A$AP Rocky] & “Hands To Myself,” Hailee Steinfeld “Love Myself,” Britney Spears “Slumber Party,” Gwen Stefani’s “Used To Love You,” Linkin Park’s “Heavy,” Ed Sheeran’s “Dive,” John Legend’s “Surefire,” with additional song writing credits on recent releases from P!nk, Maroon 5, Jessie Ware, Janelle Monae, Keith Urban, Years & Years and more.  The cumulative worldwide stream tally for songs she has co-written is 20 billion to date.  As a songwriter, she has co-written 21 titles that have charted on the Billboard Hot 100, eleven of which have hit the Top 40, including “Issues.”