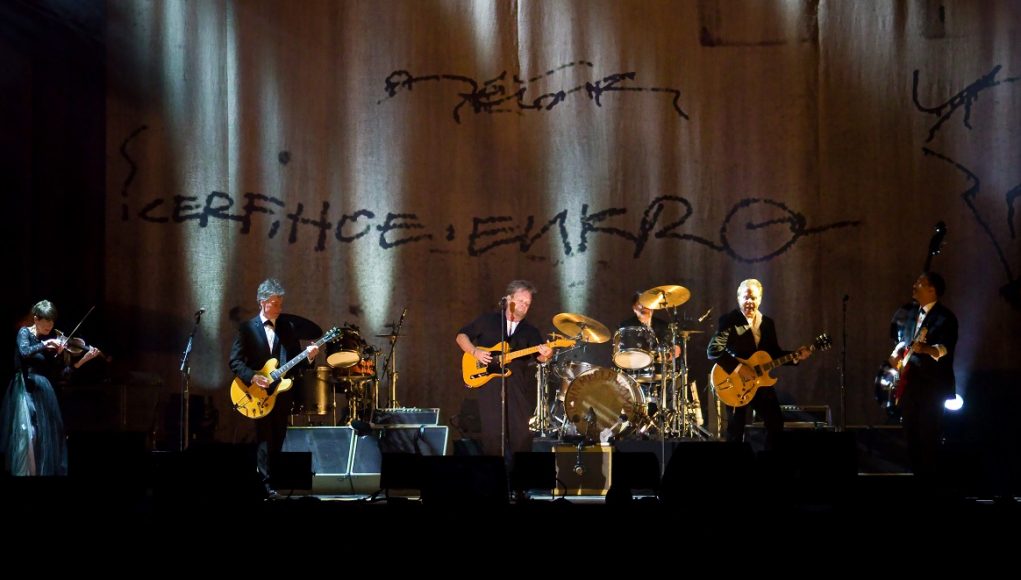 From the first twang of John Mellencamp’s guitar at Prospera Place last Saturday night, a crowd of approximately 3500 concert goers were ready to party.

Mellencamp’s hair may have grayed a little over the past 40 or so years, but the 67-year old Rock and Roll Hall of Famer’s husky voice and distinct guitar style still thrilled the crowd.

Mellencamp opened with Lawless Times off his 2014 album Plain Spoken and followed up with John Cockers from 2008’s Life, Death, Love and Freedom. He then moved back to the mid-80s with Minutes to Memories from his 1985 Album Scarecrow, which peaked at the number two on the U.S. chart, followed by Small Town from the same album.

Under a single spotlight, Mellencamp got bluesy with his cover of Robert Johnson’s Stones in My Passway, which appeared on 2003’s Trouble No More, a collection of folk and blues covers.
Mellencamp then returned to work from his Scarecrow album with the familiar hit Lonely Ol’ Night.

The crowd went wild as the strains of the accordion heralded the start of Check it Out from Mellencamp’s 1987 album, the Lonesome Jubilee.

Mellencamp connected with the audience, making jokes about building a two-foot wall between Canada and U.S. to keep the Americans out of Canada and telling stories about his grandmother, who called Mellencamp Buddy and lived to 100.

When she became ill, she called Mellencamp to come see her as she didn’t have much longer and provided the line, “This life is short even on its longest days,” which he used for Longest Days from his Life, Death, Love and Freedom Album in 2008, named by Rolling Stone as number five on its list of the 50 best albums of the year.

Mellencamp performed an acoustic version of Jack and Diane, from his 1982 breakthrough album American Fool, which held the number one spot on Billboard album chart for nine weeks. His most successful single, Jack and Diane, was a number one hit for four weeks. Alone on the stage with his acoustic guitar, he sang the lyrics with the audience and kidded them when they missed the second verse. “This song is only about 100 years old,” he said.

Alone on stage with the pianist, he followed up with Full Catastrophe from 1996’s Mr. Happy Go Lucky, Mellencamp’s first album released after his heart attack in 1994.

Mellencamp performed one song from his 2017 album Sad Clowns and Hillbillies. Easy Target, a comment on the state of society, was another acoustic entry, with Troye Kinnett on piano and a mournful solo from Mariam Sturm on violin.

The acoustic portion of the concert finished up with Kinnett on accordion and Sturm on violin playing an instrumental medley of Mellencamp’s music.

The quiet music was in stark contrast to the driving bass as Mellencamp launched into Rain on the Scarecrow, the lead-in for the last seven songs of the concert, laying down hit after hit.

After 1987’s Paper in the Fire, Mellencamp went into 1983’s Crumblin’ Down, showing plenty of energy and dancing to drummer Dane Clark’s solo. “I’m digging these drums,” he said.

The crowd cheered after recognizing the first few bars of the Authority Song, also from the Uh-huh. Mellencamp mashed up the familiar tune with a rock version of Land of 1000 Dances and had the audience sha-na-naing along. He finished the set with Pink Houses, another hit from Un-Huh.

For his encore, Mellencamp talked a little about Mike Wanchic, who has been playing guitars and backing vocals with Mellencamp for over 40 years. Mellencamp said while he liked to look to the future, at the end of the day all you’ve got left is old times as an introduction to the nostalgic Cherry Bomb from 1987.

The band held the final note of Cherry Bomb before starting in on his huge hit, Hurts So Good. Anyone in the audience who wasn’t already up singing and dancing succumbed to the music. The crowd at Prospera Place was on their feet, singing and swaying to the soundtrack of their youth.