The Okanagan Society of Independent Filmmaking third annual INDIEFEST made for a great night out this past Saturday night. Storytellers, Artists, Musicians, Filmmakers and Movie lovers of all description enjoyed a feast of film and music at the Kelowna Community Theatre.

An international flair was added this year to the festival as the competition was opened to international entries. Winner of Best Sound and Best Story, “Ainhoa” by Ivan Sainz-Pardo (from Spain) was about a 9 year old girl that leaves home, in a story that “instead of trying to put children to sleep, tries to wake up the adults.”

There was a strong turn out from the local independent film scene, with a fantastic lineup of short films including OSIF Pitch to Screen competition winner “Reason’s Why You Should Eat Me” by Natasha Daly. There were also short documentaries that covered subjects as varied as that of Vernon based Canadian female rock icon, Darby Mills and local ecological concerns to classic car enthusiasts. Music videos nominated included those from both far away (one featuring jaw-dropping scenery from Australia) and many from the Okanagan’s blossoming music scene.. the Oot n Oots “dustpan” music video providing some light relief from some of the other entries more sombre subjects.

Many of the winning films had local connections. Harrison Mendel’s beautifully realized “Beautiful Idiot” won Best Short Doc with Best Cinematography going to Justin MacGregor for “Friendship before Money”, with Best Actor being awarded to Super Bingo’s Matt Mazur. The big winner of the evening was “Super Bingo” by Matthew Blecha which also won Best Overall Film and Production Design.

Finally, as the evening’s entertainment drew to a close the audience got to vote on their favorite film of the day. Justin MacGregor’s experimental short film “Friendship Before Money”, starring the always entertaining Tommy Wiseau and Greg Sestero of “The Room” and “The Disaster Artist” fame, took that final accolade.

This years INDIEFEST was a shining example of the wonderful stories and talent we have in the Okanagan and beyond.

Look out in the coming months for a call for entries for the well established Horrorfest, that the OSIF host during the Halloween period! For more information check out their website at OSIF.org. 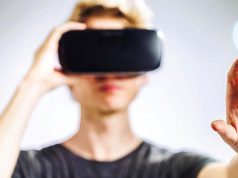