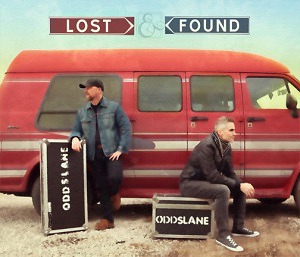 Odds Lane is Doug Byrkit and Brian Zielie, friends since high school. When Mike Zito was looking for a rhythm section, he tapped these guys fresh out of college. They played extensively in the St. Louis area, recording the legendary Blue Room album in the late 90’s. In 2003 Doug & Brian formed Odds Lane, and the recent re-release of Blue Room by Ruf Records inspired them to do Lost & Found. Their old band mate says they “have great songs, great playing, truly original- almost a modern day Steely Dan.”

Lost & Found has the swagger and groove you’d expect from someone compared to the Dan. Recorded in Texas and mixed by Grammy Award-winning producer David Z (Prince, Etta James, Buddy Guy), Lost & Found could have come from any era, from the 70’s onwards. Supple playing with jazzy nuance informed by rock currents makes it a genre buster, and it has a definite blues heart. Quite cool, this.

KEY CUTS: title track, Don’t Give It Away, Hard Rain 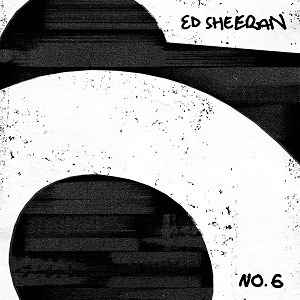 NO.6 COLLABORATIONS PROJECT Ed Sheeran (Warner Music) ***
Ed Sheeran is one of the biggest pop stars in recent memory. Though current production techniques and samples can leave me cold, I still have a soft spot for a nice melody and thought provoking lyrics. On that score Sheeran delivers again on No.6.

No.6 featuring blockbuster collaborations between Ed and some of the biggest names in pop music, will rule the charts; Kahlid, Eminen & 50 Cent, Cardi B & Camila Cabello, Skrillex, Bruno Mars, The Biebs. I’m familiar with some of their stuff but not a whole pile; after all I am in my lower 60’s and the last thing I should care about is ‘being hip with the kids.’ This disc is a marvel of production styles, though the use of ticky drum samples, so common these days. makes the music feel chilly and plastic.

Collaborations is aimed squarely at an audience decades younger than I, but I can still appreciate Sheeran’s craftsmanship. For someone like me, this album feels brand new yet with comforting melodic familiarity. Not my jam, really, but not bad. 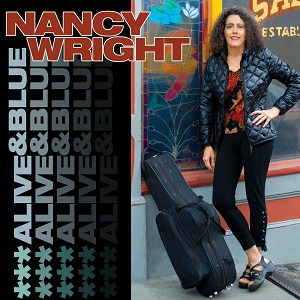 ALIVE & BLUE Nancy Wright (Vizztone) ****
There are few pleasures equal to listening to great musicians jamming live. That’s just what Alive & Blue is-flashes of brilliance, and grooves with the power to heal.

Alive & Blue, recorded at San Francisco’s The Saloon, a bar Wright began playing in the mid 80’s, happened almost by accident. “I occasionally thought that somebody should record the band live because I love the way they perform together” Nancy says. “I contacted Greaseland the day before our Saloon date (and) luckily, Robby Yamilov was available. There’s something about The Saloon and its audience that enhances any performance.” Alive & Blue puts us right there in the audience too. 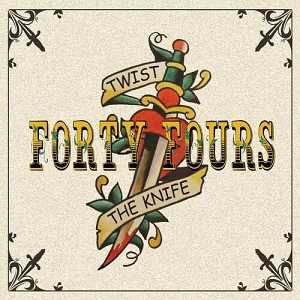 TWIST THE KNIFE The Forty Fours (Rip Cat Records) ****
The Forty Fours’ first record in 7 years is a beauty. Bandleader Johnny Main (guitar, vocals) has spent the last few years rebuilding the band with an all-new line-up- Twist The Knife was clearly worth the effort.

“I was at a point where I had to decide whether or not to keep this band alive” Johnny says. “All those guys we look up to, like Muddy, Wolf, Albert Collins, Lightnin’ Hopkins… they kept going until they died. I want this record to serve as a tribute to them- their inspiration is why I started this band, and it’s what keeps driving us today.”

Twist the Knife is a 33 minute rough and tumble encounter with the hard, hard blues. Main and the guys tip their hat to Muddy with Champagne & Reefer, Johnny sounds just like Wolf when they play Howlin’, and the spirit of Albert Collins is alive and well on the slow burning Helsinki Blues. Eric Von Hersen’s molten harp work is the spice that makes this disc such a delicious mix. The 44’s are back and THEN some! 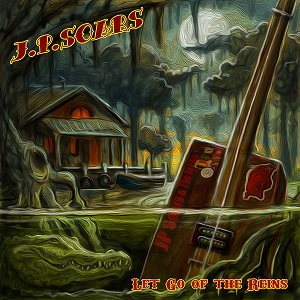 Inspiration here came from the many nights JP, bassist Chris Peet and drummer Benoit spent jamming into the wee hours on the Legendary Rhythm & Blues Cruise and at the Big Blues Bender. Reins has a loose feel- a bunch of guys just strapping up and letting ‘er fly. “(This) was written and recorded very organically and honestly” Soars notes. “We captured the moment, and what a spectacular and special moment it was. I hope you enjoy this record as much as we enjoyed making it.”

Covers include Django Reinhardt’s Minor Blues and The Ozark Mountain Daredevil’s If You Wanna Get To Heaven and they’re decent, but there’s more spirit in the originals. Soars’ guitar playing is dynamic, as a singer his husky voice is enjoyable. As a blues album this is roughed up in the right places but the sound can get polite- it’s still a keeper. Release date: August 23rd.

KEY CUTS: Lonely Fire, Been Down So Long, Let It Ride 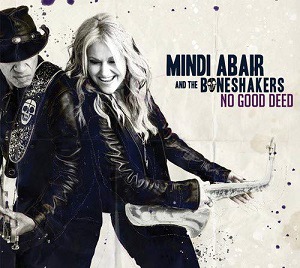 NO GOOD DEED Mindi Abair & The Boneshakers (Pretty Good For A Girl Records) *****
It’s their 3rd time at bat and this one is headed over the right field fence. No Good Deed is one of the most infectious, energetic, rockin’-est discs I’ve heard in maybe ever.

Produced by Kevin Shirley (Rush, Joe Bonamassa, Zeppelin), No Good Deed sounds and feels outstanding. Their take on You Better Run out-muscles Pat Benatar’s version, and the original material takes a journey along the mood and energy spectrum- decisiveness meets remorse and reflection for a seductive, energizing and intoxicating romp. The disc is musically complex but not wanky, and it’s emotionally quite simple.

I love Mindi’s vocals, and her sax playing has been compared to King Curtis with its hard-blowing, gritty tone. Mindi and The Boneshakers playing is so in the pocket it’s ridiculous- these 5 people belong together. “Backstage 300” says this “captures the intent of a rock band, the grit of a blues band and enough energy to light up a stadium”, and producer Shirley has put all of those qualities into play. I’ll be shocked if this doesn’t place near the top of my 2019 year end list. 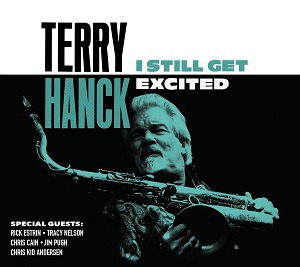 Terry Hanck’s sound is classic New Orleans R&B, Chicago blues and soul, West Coast honk and Memphis rock & roll. There’s an almost American Graffiti vibe here, a conlfab with older spirits. Whether you were around then or not, or how you feel about that era will affect how you feel about Excited. It’s 5 originals and covers of tunes by Louis Jordan, Lightnin’ Hopkins, Bobby Charles, Eddie “Cleanhead” Vinson and Howlin’ Wolf. Terry rocks and he rolls too, but his music is always within reach of the blues.

Recorded at Kid Andersen’s Greaseland Studios in San Jose, I Get Excited includes appearances from Andersen on guitar, harp man Rick Estrin, keys man Jimmy Pugh and a bunch more. There is a spirited give and take amongst the musicians, an understanding of how to make these songs work. Pretty cool- musicians in particular will enjoy this.

KEY CUTS: Early In The Morning, Here It Comes, Howlin’ For My Darlin’ 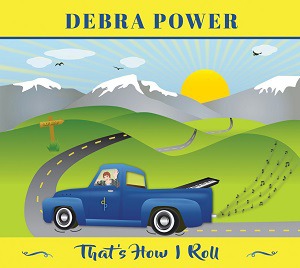 THAT’S HOW I ROLL Debra Power (independent) *****
Holy smoke! It’s the second album for Debra Power- piano player, singer and songwriter- but my first encounter with her. The piano is surely an underappreciated instrument in the blues but in Debra’s hands it’s mesmerizing.

Power, from Calgary, rocks on the piano Johnnie Johnson-style and, as a singer, she reminds me of Etta James. No wonder she’s been nominated for a fistful of awards already, has rocked festival stages across Canada, and was a semi-finalist at the International blues Challenge in Memphis last year. That’s How I Roll swings like mad, and performances from all involved- particularly Debra- are deliriously hot.

That’s How I Roll has a gospel energy, swagger and confidence, just what I needed to hear this week. Produced by Chris Byrne with Debra, there is more pounding on the table and life in my headphones right now, tempered by a sense of playfulness (checkout Last Time I’m Lovin’ You) than you get from most records. This album is a real delight to listen to no matter how you approach it. It’s not good… it’s great. 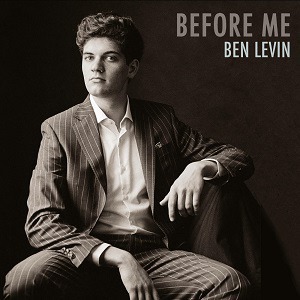 One listen to Before Me will convince you that Levin is the product of a decades-long career playing skeevy dives and smoky juke joints, his sound has that feel of mileage and experience; in reality he’s just finished his first year of college. His singing style is a relaxed croon and his piano playing reminds me of my early Nat Cole records. Groove is maintained by Chris Douglas on upright bass and drummers Oscar Bernal & Philip Paul.

Recorded over 4 days in Dayton, Kentucky, Before Me has the feel of a live performance, of masterful musicians vibing off each other like crazy. I suppose to some these songs (6 are originals) sound dated or from another era, but in a time when everything is so dense and fast, that’s a blessing. Sinatra and Joabim would’ve loved this guy- I know I do. 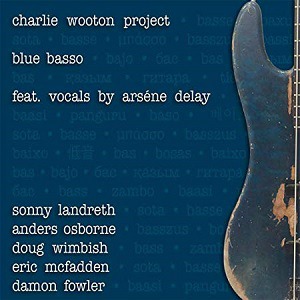 BLUE BASSO The Charlie Wooton Project (Wild Heart Records) *** ½
The bassist for Royal Southern Brotherhood pays tribute to Jaco Pastorious, and the New Orleans musician has the chops to do it- with a little help from his friends, of course.

Blue Basso is mostly funk with jazz connective tissue, a lesson in how the bass can sound in the right hands; Charlie Wooton is clearly a master of his craft. From a song like Jaceaux where he and Living Colour bassist Wimbish salute their hero to the acoustic simplicity of Front Porch, these songs cover a lot of ground. Not everyone’s cup of tea, but I dig it. 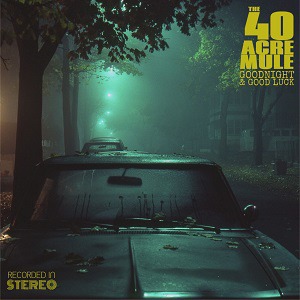 GOODNIGHT AND GOOD LUCK The 40 Acre Mule (State Fair Records) *****
Vintage rock & roll with R&B, soul and just a smidge of country- that’s The 40 Acre Mule. Their debut, due out August 23rd, is rock & roll from the wrong side of the tracks. Fans of Reverend Horton Heat and Webb Wilder will be into this.

Influences include Chuck Berry, Bo Diddley, Little Richard and Ray Charles. Forming in Dallas in 2015, The 40 Acre Mule has been gigging ferociously since and growing their audience. “We went from 10 or 15 friends in a dive bar on a Tuesday to playing full-on festivals before even having a record out” says J. Isaiah Evans, “and that says something. I think we’re making music that people from all walks of life find comfortable and familiar, the very backbone of rock & roll.”

There is a primal appeal to Goodnight, with something fans of any branch of rock & roll can relate into. Alligator Records founder Bruce Iglauer once told me that the appeal of the blues is that “it’s honest, unpretentious music” and the same can be said of The 40 Acre Mule. As debuts go, this is quite excellent. 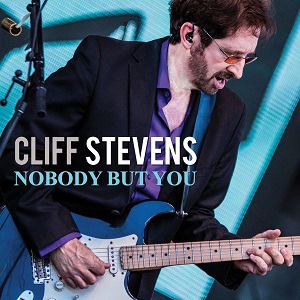 NOBODY BUT YOU Cliff Stevens (Red Flagg) ***+
Fans of mid-period Clapton will really enjoy this one. Nobody But You, the 4th solo album for this Montreal-based guitarist, is a smooth, lively adventure.

Stevens has been playing professionally for 35 years, but if the name isn’t familiar it’s because, like a lot of players, he’s spent much of his career as a sideman. He’s played thousands of gigs; ranging from 14,000 at the Montreal International Jazz Festival to 14 drunks at a bar in Moose Jaw. He’s a smooth singer, expressive but not overly emotional, and as a guitarist Cliff is a cross between Clapton and Robert Cray.

The precision and light feeling of these songs makes even more sense when you find out he has a master’s degree in music and education. There are no musical accidents on Nobody But You, everything is well constructed and played with precision. Maybe a little wildness, some fire in the eyes might elevate the music but that’s not where Cliff comes from, and that’s okay. Excellent production and musicianship is what this disc offers- it’s good for peeling yourself off the ceiling after a long, hard day.