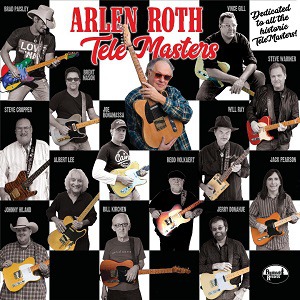 If you love great guitar playing with some twang, this will be the best purchase you ever make. Arlen Roth has gathered some Tele-playing greats to make Tele Masters and this is as sweet as it gets.

The sound of a Tele lends itself to country expression, and you’ll hear and feel a lot of that here.  This disc was recorded mostly in Nashville, crisply produced by Tom Hambridge (Buddy Guy, Foghat), who also played drums.  Some of the songs you will recognize and a good number of the players too, but what makes Tele Masters so damn good is it’s a journey of discovery… it sounds like everyone had a hoot laying these songs down.

Tele Masters guest list includes, in part; Brad Paisley, Vince Gill, Steve Wariner, Steve Cropper, Joe Bonamassa, Albert  Lee and Johnny Hiland.  “This was such a rewarding experience for me to make” Roth says about the album. “I got to do some Telecaster duets with the best of the best when it comes to Tele playing.  This album is dedicated to the great Tele masters of the past; Albert Collins, Danny Gatton, Mike Bloomfield, Roy Buchanan, Clarence White, Roy Nichols, Don Rich, Jimmy Bryant, Luther Perkins, Muddy Waters, Waylon Jennings and so many more.”

Songs on Tele Masters you’ll likely recognize include Key To The Highway, Rumble, Mrs. Robinson, Tennessee Waltz and Ghost Riders In The Sky.  There are some with vocals, but more instrumentals.  Great songs, beautifully played, there is nothing about this disc that doesn’t thrill me. 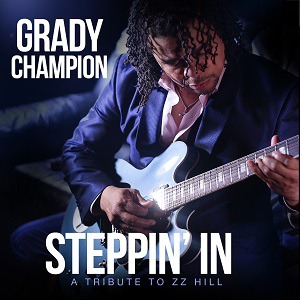 STEPPIN’ IN: A TRIBUTE TO ZZ HILL Grady Champion (Malaco) ****

If you know your blues, then you’re familiar with most of the tunes on this disc, quite likely played by people other than ZZ. Grady brings all of his talents to bear in honoring one of his favorite bluesmen; the release date is April 26th, 35 years after Hill’s death.

“I’ve been particularly inspired by ZZ’s efforts to restore blues music to modern black consciousness” Grady notes.  Tracing back through his recorded history, this disc is a logical next step for Champion.  “I play what I feel” he says.  “I think the blues has a bright future… you just gotta be able to hang in the game.”  Champion’s socially conscious lyrics and inspiring live performances ensure that this is the case,

Born Oct.10th 1969 on a farm in Canton, Mississippi, the youngest of 28 (!) children, Grady joined his church choir at the age of 8 and, for a brief time, tried rapping in the early 90’s as MC Gold.  He then discovered a talent for the blues, and infused it with hip-hop elements. Make no mistake though, Steppin’ In is as blue as blues can be.  Champion’s had a number of records over the years, and ZZ Hill’s influence on the blues is broad. This one will get some serious attention from fans and blues radio hosts.

Produce by Champion, Steppin’ In has a clean sound that could maybe use some grit. Grady’s gravelly voice, in the pocket harp playing and precise guitar work are a real treat.  This is the blues with soul, and I can handle that all day, any day.

KEY CUTS:  Who You Been Givin’ It To, Down home Blues, Someone Else Is Steppin’ In 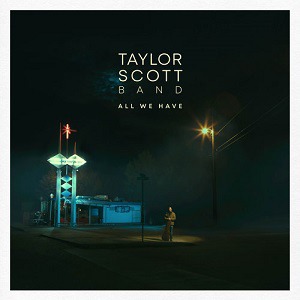 ALL WE HAVE Taylor Scott Band (independent) ******

Some albums are good, others are great, but few are thrilling; that’s just what All We Have is.  A mind-altering amalgam of soul, funk, blues and rock & roll with folk touches, this is a disc you can’t pigeonhole. Great songs, fantastic playing- I LOVE this!

Steve Berlin of Los Lobos was chosen to produce, and that was clearly the right choice. “When (Steve) and I started working on pre-production, our approach was to pick the best songs I had written up to that point and start there” Taylor says.  “He didn’t ask me to change much but he did, though, ask me to write a chorus to a song called Clearance Bin, which didn’t have a proper one before. The first words I thought of ended up being the mantra of the entire album; ‘the day-to-day is all we have, I’ll trade it for a song and laugh, the things I like weren’t meant to last anyway.’ One way or another, every song on the album is about that message in some way.”

All We Have is 12 songs- 11 originals and a cover of Sleater-Kinney’s Good Things.  Taylor Scott is on guitar and vocals, Jon Wirtz on keys, Chris Harris on bass and Lem Williams on drums, with a guest appearance by one of Taylor’s heroes, Los Lonely Boys guitarist Henry Garza.  My affection for this disc is on par with how I feel about Matt Andersen’s stuff- great songs with deep lyrics that get into things that matter. Of working on this record with Berlin, Scott notes that “these new experiences were coupled with what I’ve always held dear and strive for; to tell a story and make honest, meaningful music”, and by God that’s just what he’s done. All We Have is EXCELLENT. 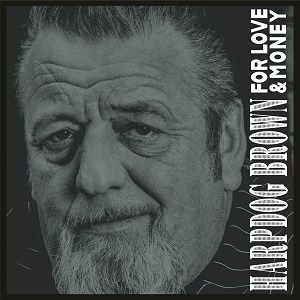 Harpdog takes Chicago blues down to New Orleans for a party- this is the most fun you’re going to have all year, and it comes out April 26th.

For Love & Money is good time jump blues, something Harpdog does very well.  Produced by guitarist Steve Dawson, this disc has that vintage vibe we want as Dog summons the spirits of Louis Jordan, Sonny Boy Williamson Louis Armstrong and the greats from Sun and Chess.  Recorded at The Warehouse in Vancouver For Love & Money is a mix of originals and well crafted covers, a true showcase for that lived in growl of a singing voice and some of the tastiest harp work of his career.

This isn’t a guitar driven album as some of his past stuff has been, leaning heavily on piano and horns.  Of the songs on this disc, producer Dawson notes that “this is totally unique material.  Where he’s drawing from is this era of 40’s and 50’s jump blues mixed with some Chicago meets NOLA and the harp stuff is reminiscent of 50’s Sonny Boy-era blues… you can’t really put your finger on it.”  That’s what makes this a totally excellent blues adventure, perhaps unique in Harpdog’s recorded work, but fans will instantly take to it- of that I am 110% certain. “I speak the blues like it’s the truth, and it is” Harpdog says.  “I do feel like I’m a servant of the people, a missionary if you will.  Music can heal people if they listen to the messages in these songs.”

I’ll let Harpdog have the last word on For Love & Money; “This is one damn fine album depicting where I am in my life and musical career.  The title sums it up well- after all, that’s what it’s all about. And in that order. We should all know that money is useless without love.” 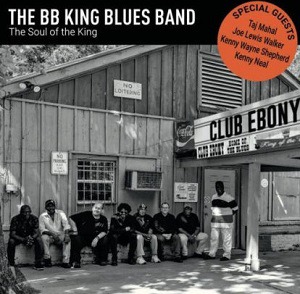 They played with BB for over 35 years.  The BB King Blues Band celebrate his music by reimagining some of BB’s classic numbers alongside a few of their own tunes.  “It’s important to continue what he started” says executive producer Terry Harvey, and that’s exactly what The Soul Of The King does in fine fashion; it’s a love letter to their fallen leader.

The Soul Of The King is a goose-bump raising blues experience.  Choosing songs from King’s sprawling catalogue to handle here could have been an onerous task, but the band made a smart move by letting the A-list guests dictate the material. “”As the name artists joined the project” recalls Harvey, “we picked songs that we felt fit their voices.  Our approach was to not stray too far from the original, but still to make it fresh. (We) want to remember BB and to introduce his music to the youth of today.” That guest list includes Kenny Wayne Shepherd, Mary Griffin, Taj Mahal, Kenny Neal, Michael Lee, Joe Louis Walker, Diunna Greenleaf, Kirk Joseph and John Del Toro Richardson.

These are King’s guys, and they have that uptown horn driven blues thing down cold.  My wife and I were lucky enough to see BB at his final Edmonton show, just 8 rows back, and it’s a night we’ll never forget.  BB has been gone 4 years now, but if he were able to hear The Soul Of The King, I think he’d be thrilled with how his message is being carried forth. Long live BB King!  This comes out May 10th.

KEY CUTS:  Lowdown, Regal Blues, She’s The One, Paying The Cost To Be The Boss 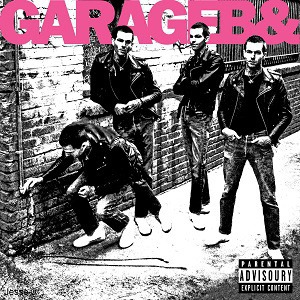 They say not to judge a book by its cover, and that goes for records too.  You’re forgiven for thinking GaragB&, the second solo outing from The Neighbourhood’s Jesse Rutherford looks like a punk set- it isn’t.  It’s an intriguing mix of hip-hop and indie rockness that, having been tricked by said album cover, I was surprisingly receptive to.

Looks like a Clash album cover, doesn’t it?  That actually relates to the video for the lead-off single Tunnelovision,  directed by Zack Sekuler, which features Jesse reenacting famous albums covers such as Nirvana’s Nevermind and Ourkast’s Stankonia; check it out on You Tube and see what I mean.  Had I been familiar with Jesse’s ‘day job’ I’m not sure I would’ve been receptive to GaragB&, but after seeing the cover and then diving into the tunes it was a case of ‘well that’s not what I was expecting, let’s see what the kid’s got’, I’m pretty happy that things unfolded that way.

As an old rock dinosaur I’m always in favor of real instruments and loud noises but the bleeps and skronks and artificial percussion sounds on GaragB& are agreeable.  One way this disc relates to the punk cover art is the brevity- 10 songs here, and the album is a hair over 23 minutes long.  Unlike some of the bloated rock acts in my music collection, Jesse says what he has to say- gets the fuck in, and gets the fuck out.  I looked up The Neighbourhood on Wikipedia and saw they played Coachella in 2013, so if that festival speaks to your musical taste then you should give Jeese Rutherford’s new set a spin.