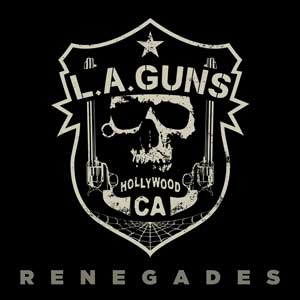 You’d need a wicked spread sheet and a slide rule to keep track of who’s been in this band over the years.  Born from LA’s Sunset Strip scene along with bands like Ratt, Motley Crue, GNR, Quiet Riot and Ratt, this version of LA Guns includes Steve Riley, Kelly Nickels, Scott Griffin and Kurt Frolich.  There’s another lineup out there too with Phil Lewis and and Tracii Guns leading the way.  Renegades, released November 13th, is riff heavy west coast rock, caught in a time warp.

Taking a quick peak at the band’s website it would seem they’ve put out a zillion albums since forming in 1983, but really this is the first Guns record I’ve checked out since 91’s Hollywood Vampires.  Rhythm guitarist Kurt Frolich handles lead vocals for this line up, and there are times his vocals remind me of Billy Corgan.  No complaints about the rhythm section (Steve Riley, Kelly Nickels), a straight ahead and solid combination with no frills or fancy stuff, which is what you really want with this kind of rock & roll.  Scott Griffin’s lead guitar work is at times flashy but not particularly surprising.

There are two things preventing me from giving Renegades a higher rating.  First the songs, even with Griffin’s 6-string acrobatics, seem somewhat pedestrian.  At times they come across as paint-by-numbers Sunset Strip rock with nothing new to offer.  If you’re a fan of the mid-80’s rock scene prior to the killing blow dealt by grunge you might find that refreshing but to me, it sounds like dozens of other bands from that era.

Second, the production isn’t great.  The instruments are recorded well enough (particularly Riley’s drums) but the mix is bush league. The rhythm guitars should be more prominent- thicker, juicier, more up front, more menacing, but here they’re curiously flat which robs the music of much of its power.  I was really hoping to like Renegade a lot more than I do, but it fails to dazzle. 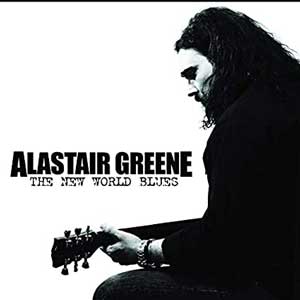 Though this came out in October, Alastair Greene’s new record is my first perfect album of 2021.  The New World Blues, all original material, is a musical bon-bon for fans of sweaty, manly blues guitar.  A blues album with rock & roll mightiness by this ‘guitar player’s guitar player’ it’s a steering wheel-pounding wake-the-neighbours beauty.

The New World Blues  was produced by label co-founder Tab Benoit, who also plays drums and sings some harmony on the disc. “This is definitely the most stripped down blues based album I’ve ever made” Alastair says. “The vast majority of this record is live in the studio with very few overdubs and many were first or second takes.”  The album is like a cross between Gary Moore and Led Zeppelin- you can call it blues with a hard rock approach or hard rock with a blues approach and be correct both times. “When I started writing the majority of these songs in 2019, I had no idea they would take on a whole new and more poignant meaning as time went on” he notes. “The New World Blues is a reflection of our current times and has equal parts light and dark.

The songs of The New World Blues cover a lot of ground stylistically.  Some of these numbers rock pretty hard while others centre on a blues/funk groove and, thanks to recording in Louisiana and having Tab Benoit involved, you’ll hear some Cajun spice as well like Bayou Mile which features some of the tastiest slide guitar I’ve heard in awhile. I love the robust production, the interlocking rhythm section, and Alastair’s fierce guitar playing, with a feel that reminds me of Jimmy Page right up to and including Physical Graffiti but maybe a little more bold.

2021 is off to a weird start and who can tell when we may collectively emerge from under this dark cloud?  I can tell you one thing with absolute certainty; Alastair Greene’s The New World Blues is exactly what I need at this precise time to lift my spirits. 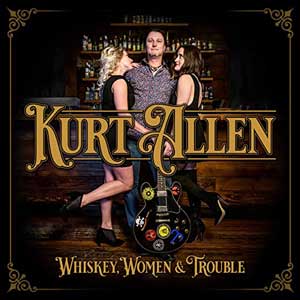 I’ve had this disc sitting on my desk for awhile now, wish I’d gotten to it sooner.   Whiskey, Women & Trouble, a set of rockin’ blues, is exactly how you want your Friday night to feel.

WW&T seamlessly blends rock, funk, blues and soul with a southern feel into a satisfying listening experience, with quite down to earth lyrics.  The title cut, for example, comes from a conversation with a friend where they were discussing each other’s vices, and it’s a modern take on old school swing.  If you want some slow blues- and don’t we all- you’ll get it from How Long, Kurt’s homage to Zeppelin.

All the songs on this record were written by Kurt, and he co-produced with Larry Gann.  Whiskey, Women & Trouble is well recorded but not overly shiny, fussy or particularly well mannered for that matter as Allen leads his 5 band mates (bass, drums, keys and horns) through the paces.  Kurt has a gritty vocal style that fits the songs well, and the UK’s The Rocker praises this disc as “(the answer to) the long pondered question of what the early 70’s love child of Elvin Bishop and Stevie Wonder would sound like.”  An intriguing thought, isn’t it?  The horn section in particular gives the soul numbers some zip, and it takes some of these blues tunes downtown. I also like that he gives everyone a chance to stretch out.

The press release I got with the CD says you’ll like this if you’re into Joe Bonamassa, Anthony Gomes, Albert Castiglia and Matt Scholfield, which seems like a decent comparison. Allen is a solid guitar player too- solid rhythmically and expressive as a soloist, and I like that he doesn’t go too overboard.  Like I said; solid.  From the blues rock power of the opening cut Graveyard Blues to the old-fashioned Chuck Berry-style rave up Sweet T at the other end and everything else in between, you’ll find lots of good company here.  Like I said at the top, this is how you want your Friday nights to feel. 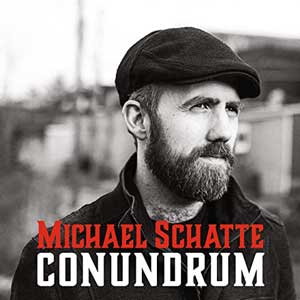 An exciting new record from what Blues Matters UK calls “one of the best undiscovered songwriters of our times”, that’s Michael Schatte’s Conundrum.  Sharp lyrics, lively tunes, breathtaking guitar playing and a tight sound make this album a delight.

Schatte calls his original blend of rock, blues, Celtic and other styles “eclectic electric roots music”, and if you’re not listening closely you might even mistake it for country- though not really like any country you’ve heard.  Michael is a jaw-droppingly talented guitarist and clearly an engineer/ producer of considerable skill too, making for a punchy yet organic sound.  What will grab you first is the stunning musicianship and your appreciation for everything that’s happening only increases with each spin.

Conundrum displays a variety of musical adventures, matched by the disparate subject matter Michael has chosen to cover over these 15 tracks; lust ready to boil over (Water In The Kettle), sibling rivalry with a sense of humour (Please Don’t Dance With My Brother) and existential whimsy in the psychotropic title cut and the slightly more down to earth In The Cold Hard Here And Now.  This is a record to enjoy on many levels, from the brilliant playing to the lyrical constructs that you’ll find engaging food for thought.  He also sheds revealing light on our darker impulses with songs like Silly Old Man, The Candy Aisle and A Mind A Mess.

From the blues, folk and country soul elements to the Celtic flavours you’ll notice weaving in and out from time to time, Conundrum is an album you should listen to intently to fully appreciate its gifts;  yet doing so doesn’t feel like hard work at all.  I’m just beginning to catch up to a pile of stuff that’s been waiting patiently on my desk for months for some attention and love.  This one was released November 6th so once again I’m behind the 8 ball, but I can’t wait to start sharing some of these amazing songs on my United DJ’s radio show.   Conundrum is so damn cool it’s almost insane. 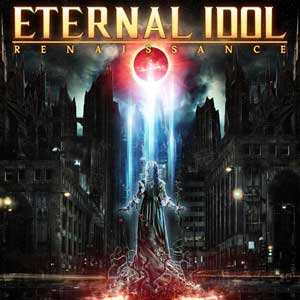 I was first drawn to this album because the band has the same name as a favourite Sabbath record, but the similarities end there.  Renaissance is Eternal Idol’s 2nd release, a combination of symphonic heavy and prog metal with an operatic sense of high drama, like early Queensryche meets Wagner and Accept. It’s pretty frigging intense.

Eternal Idol 2021 is Fabio Lione and Claudia Layline on co-lead vocals, guitarist Nick Savio, bassist Andrea Burratto and drummer Enrico Fabris.  Having male and female singers sharing lead vocals gives the band a broader canvas on which to express themselves and gives the songs more scope.  As a singer Lione often sounds like Geoff Tate though his voice is capable of many different colors, and Layline’s has a sharpness of expression that can really cut through the cacophony.

Symphonic metal is quite popular in Europe (E. I. is from Italy) but it’s a relatively new experience for me so this baroque metal is taking some getting used to.  The band was put together by Fabio Lione and Nick Savio, with a plan to create a new and original sound which could catch symphonic metal fans by surprise.  They’ve done just that with their intriguing blend of classic, symphonic and progressive rock, and the addition of Claudia Layline as co-lead singer for their 2nd album is a masterstroke.  All are talented musicians but Savio’s guitar playing is particularly noteworthy, with inspiring solos that never overplay or overstay their welcome and monolithic riffing.  The rhythm section is also right on the money with epic depth and heaviosity, with Lione and Layline having the perfect voices to tie everything together.

Be prepared to spend a bit of time getting fully inside Renaissance; there’s a lot going on and much to absorb.  When the lockdowns are lifted and life gets somewhere close to being normal again, this is a band I’d like to see on stage.

KEY CUTS:  Not The Same, Black Star, Lord Without Soul