Movie stars don’t get much bigger than Dwayne Johnson. That’s why they call him The Rock. His costars in Rampage give him a run for his money though. When a chemical weapon falls from space, a gorilla named George (performance capture by Jason Liles), a wolf named Ralph and a crocodile named Lizzie mutate to gargantuan sizes.

Johnson was at a press conference in Los Angeles for his latest film, based on the classic arcade game in which players controlled the three monsters. Gonzo sat right in the front row to make sure we got to ask Johnson a question. Rampage opens Friday, April 13 in theaters everywhere.

Gonzo: After playing characters in Central Intelligence and Jumani who weren’t so sure of themselves, was it fun to come back to playing just a total bad ass? 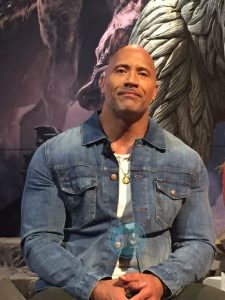 Dwayne Johnson: It was a lot of fun playing a total bad ass, but I think the key for me personally is just finding those moments. It’s fun and cool to be a bad ass and it’s awesome, but I find it more interesting and funnier and more entertaining when something kind of undercuts the badassness. A scene that I love is when George comes back, the R19 works and I’m like, “All right, buddy. Let’s go kick some ass.” He pounds his chest and he poses and screams, the alligator screams back at us and I’m like holy sh*t, and I start running away. I love little moments like that where we’re undercutting the badassery, if you will. Look, at the end of the day, this kind of movie really was just so much fun. I’ve had the opportunity to play some really cool characters in the past who have been some pretty cool bad ass guys but I think there’s something inherently interesting to me when you can play a bad ass but also the foe you’re looking at, the antagonist, you’re looking up at them. You’re running from them. I love that so any time I can put myself in a position like that is great. Especially for a movie like this where you have the latitude to just have so much fun.

Q: Talk about the relationship between your character and George, which gives the movie some heart.

DJ: Sure. The relationship with myself and the gorilla George was something that we had talked about very early just in terms of how we were going to produce the movie and make it. We felt like you can have the calamity of a movie like this, the expectation of the group that created and did San Andreas, what this next iteration of their film is going to be like. Especially with Rampage, the conceit of this idea is an absurd one. It’s a ridiculous one in that we have three gigantic monsters completely destroying the city of Chicago. You know, much like the original video game, there wasn’t a complex story line like you find in today’s video games. So it was fairly one note. We took a lotta swings, a lotta cracks at it and got it to a really good place where it was viable, believable and more importantly fun. But then we also, when we sat around the table, we thought, “Well, we need an anchor. What’s going to anchor this movie in heart and soul?” That’s going to be a relationship between myself and my best friend. My best friend is a rare, gigantic, as you guys know, albino gorilla. We felt like if we were going to be able to nail that anchor, then we have a shot at making a movie that people really want to go on the ride with, but also more importantly I think, we had a shot at making a movie that kind of stood the test of time. That was important to us in the monster genre. There’s been a lot of great ones in the past, your King Kongs, your Godzillas, even Jurassic Park I include. So we just wanted to try and raise the bar maybe just a little bit, and anchor it in the relationship.

Q: How did you rise above the perception that there’s never been a good movie based on a video game?

DJ: We’re all very aware, I think, going in of the video game curse that has been rampant throughout Hollywood over the years. I made Doom so I know. I have lived the curse. I think it was probably just a matter of being aware of the movie we were making and not trying to be anything else than what we were and what we are. What we are is a big fun ride. Again, like I talked about earlier, it’s a crazy idea. The conceit of it is crazy and absurd and it’s a fine needle to thread. What’s happened for us in making the movie, the goal was to lean into the absurdity of it and bring in the best filmmakers we could. Obviously, Weta Digital. We got them at a great time where they’re so incredibly ambitious to raise the bar with these monsters. They were beholden to a mythology but they knew they had room to expand. The flying wolf that also threw the very sharp pins. The alligator that was just monstrous, the size of a football field. Also what was very cool, just on a side note to the VFX company, to Weta, they were so ambitious and excited because these monsters throughout the movie, they don’t stay one size. They actually continue to grow. So by the end of the movie, if you look closely, the alligator is the size of a football field and a half. So I think it was a matter of leaning into the ridiculousness of it, and I mean that in the most positive way, but also as we talked about earlier trying to find a rooted anchor in it and having a relationship, but also make sure that the relationship was fun. We sign languaged with a gorilla, had sign language consultants who were helping me. I think there was a time when we were creating the script and chopping it up where we thought, “Well, what if my best friend also had the personality of a 12-year-old?” Not too far from my own personality, which you know. Again, I think it was a combination of all those things. Then with the rest of the cast, sending them a script and saying I know you guys, everybody here has got a lot going on and come from different genres and areas in our business. What do you think? They all loved it and here we are.

Q: What was the movie that made you fall in love with going to movie theaters?

DJ: For me it was Jurassic Park, the first one. Actually, I’ll go back before that again, another Spielberg movie. It was Indiana Jones in 1981. I would say those two movies but specifically I remember watching Jurassic Park and feeling the theater shake, especially when the dinosaurs were starting to walk. I was really blown away by that experience. You see a lot of that in [Rampage director] Brad [Peyton]’s film making too and the influence of that. You certainly see a little bit of that too with some of our monsters. Especially Lizzie at the end when she grows to outstanding proportions.

Q: Your character loves animals. Are you an animal lover?

DJ: I love animals. I have horses and dogs. I raise fish. I raise bass in particular. I’ve got a farm. Anyway, I love animals. To be honest with you, it was probably the best part about making this movie. We consulted with the Dian Fossey Foundation for many, many months. We were down in Atlanta, I had an opportunity to go to the Atlanta zoo, spend time with the gorillas down there and their primatologists understanding their behaviors, their emotions, their nuances. That was an amazing process for me. Also I spent a little bit of time down in the Everglades. I actually posted a picture today on Instagram of a time where I spent a little bit of time with an alligator. I was able to get on the alligator, calm the alligator, I was holding it. I don’t recommend it. It’s very dangerous but yes, I’m an animal lover.

Q: You work with a lot of directors repeatedly. This is your third movie with Peyton. What makes you work so well together?

DJ: There is ambition there. He’s a very ambitious director. I enjoy working with him creatively as well. I’ve come from the world of sports at a very early age. I enjoy being coached and I enjoy being pushed. Not a lot of directors sometimes feel comfortable in that space and that’s okay because I’ll find my inspiration or motivation some other ways. We make the project work. They all don’t have to have a coach’s mentality, but Brad does have that despite him always underplaying it. “Well, I’m from Canada and I like to apologize.” He’s also a very ambitious guy. Sports or not, in the mind he’s just ambitious. If this is the line, he’s okay to go right up to the line. It’s okay to step over the line. I love the fact that he loves movies. He loves movies and loves movies that make people feel good. I like that too. We’re very similar, our DNAs like that because I feel like we invest so much time in these movies. As you guys know, moviemaking is hard. It takes many, many months and then months of post and then you promote it like we’re doing now but it’s a long time. Especially for directors. I have the ability, I’m able to make a movie and even if I’m producing the movie, I can still go on and work on other movies while other movies are in development because I’m not directing. Brad is on the movie for two years, three years. The passion shows. He’s influenced by those kind of movies as he talked about, those Spielberg, James Cameron movies like that. I like that. I like that about anybody who’s in our business, but specifically a director because you have a responsibility I think to not only only make a good movie, but also I like the DNA that we share which is okay, we want to make this movie fun for the audience and literally want to make sure that we’re walking home floating in some way, feeling good and great about what they just saw, like a fun movie. And a great experience because that’s what movies should be and are to us. That’s my answer with Brad.