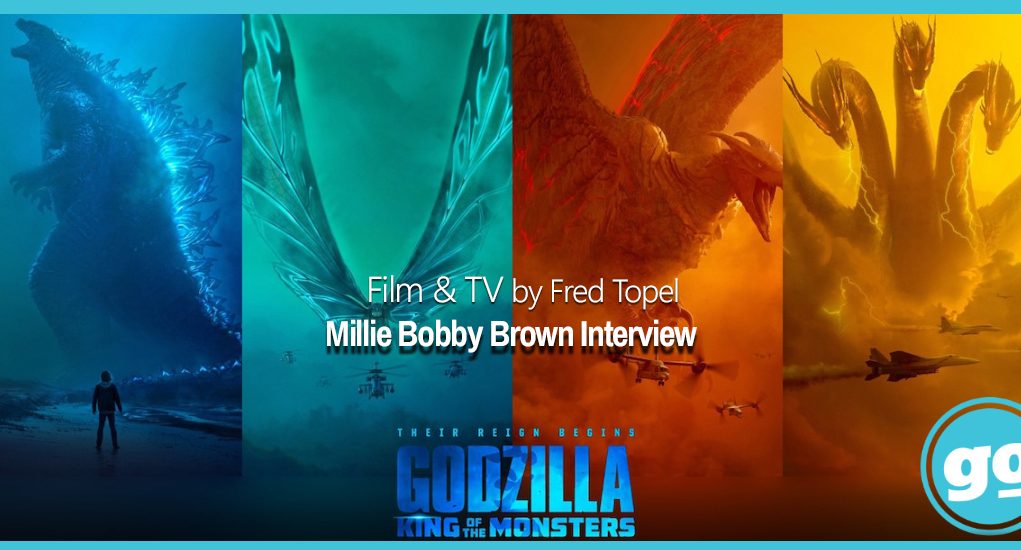 Stranger Things made Millie Bobby Brown a star overnight. Everyone is obsessed with Eleven and creatures she battles in the upside down. Season three is coming out this summer, but even before then, Brown is in her first big movie, Godzilla: King of the Monsters.

Brown plays the daughter of a scientist (Vera Farmiga). Mother and daughter are kidnapped by a group who wants to release not only Godzilla, but all the Titans including Mothra, Rodan, Ghidorah and more. Gonzo was at a press conference with Brown in Los Angeles and got to ask her a question. Godzilla: King of the Monsters opens Friday, May 31.

G: What kind movie offers have you been getting since the success of Stranger Things?

MBB: You wanna go check my e-mails? I don’t know.

G: Have they all been in genre and how do you decide what to do in the hiatus?

MBB: I don’t know. That’s what my team deals with. I get brought information that they’re like, “Okay, we think this is best.” I make my sister read the script. I trust my sister’s instinct. She’ll tell me, “Okay, you’re gonna love it.” Then I’ll read it and if I love it and I wanna do it, then I’ll do it. But if I read it and I’m like, “You know what, this is just not going to be for me.” It’s all different genres. I get offered comedies, thrillers, horror, but it doesn’t matter about the genre for me. If I feel like I have a connection with the character then I’ll do it. Most of my stuff lately have been things that I’ve actually found, like a book series. I’m actually filming Enola Holmes with Legendary this summer. It’s Sherlock Holmes’s little sister and it’s a book series about who she is and her journey. I actually found that and we are making it right now. I was a producer on it, I don’t know how. I really want to be part of the creative process and I think it’s so important to have youth and to inspire young people to understand that there’s no boundary, no age to what you can accomplish. Before I was on board, I went with a meeting. I think he’d said, “Vera Farmiga’s attached to the project.” And then for Vera, “Millie Bobby Brown’s attached to the project.” None of us had been attached to the project, bear in mind. That’s what you do. Vera Farmiga, I love her.

MBB: You know, Vera Farmiga’s an incredibly talented woman. She has two amazing kids and she’s an incredible mother to her kids. So she has this instinct, this maternal instinct that comes extremely natural to her. So to play her daughter was a breeze. You’re working alongside a seasoned, phenomenal actress that I could never really fill the footsteps. I was just watching her like, “Hi, be my friend.” She was awesome and it was just believable. You could tell we were a family unit so that was one of our things that we wanted to make sure happened on screen.

Q: What made you say yes to Godzilla: King of the Monsters?

MBB: One of the things that I loved is [writer/director Michael Dougherty] stayed true to the story. I think it’s important, especially in such a legacy, you don’t want to just go AWOL with a story that people absolutely love and cherish and wait for. From the very beginning he knew what was going to happen. He didn’t change a thing about it either. Our scripts never really changed drastically. Some things I’ve been on, full storyline turns. It was never that with him. He knew what every monster was going to look like. He had everything planned, all the artwork and immediately I was like wow, if he knows what he’s doing, if there’s no questioning what he’s doing, I want to see this guy try and kill it and he killed it.

Q: How did you get into this character and work with something that wasn’t there?

MBB: There was not much preparation. As I probably think, maybe you guys think of it differently, I physically trained for this role. If you guys have seen the movie, basically when you watch the movie, I have a lot of running. Running takes a toll. I needed to just prepare emotionally so I could run uphill and then make sure that I wouldn’t be out of breath before I got to the top of the hill. First time around I was like [wheezing] so I just kept practicing. I was training every day so I trained physically for the role. And how is to perform with something not there? You just do it. You just get there and you just do it. You imagine like something is there and you go [gasps] and then they’ll get go. And it came out pretty good.

Q: What did you think of the final product?

MBB: I would say I was nervous about what the final product was going to be because I do that with everything. I just go into everything really negative. So it’s kind of like guilty until proven innocent. It’s like it’s gonna be bad ,it’s gonna be bad, oh my god, it’s really good. It’s that with me. I don’t like to be let down, so I went in there with the mindset like it’s gonna be fine. Really just I trust everyone else but myself. And there are many things I’d like to change about my performance just because I’m just like that. I really like the movie. I think the CGI, the monsters and everybody’s acting, there’s so much human emotion I really enjoyed in the movie that’s never been seen before.

Q: Did you love Godzilla since you were a kid?

MBB: I’ll be honest, I was definitely not a fan of Godzilla, which is a good thing because my character isn’t. My character is just a teenage girl who’s just learning. She’s learning about Godzilla and the titans as she goes along. She doesn’t really know how she feels about him. But, I don’t know. I think that her love and affection toward him grows and also in Godzilla vs. Kong.

Q: Who is your favorite Titan besides Godzilla?

MBB: I think for me Mothra just because she’s the only girl and she’s such a hero. She’ll just be like, “What up guys? Who needs me? I need to go get my nails done.” She’s great .I love her. She’s so gorgeous. I’d marry her.

Q: What can you say about Stranger Things season three?

MBB: Stranger Things season three is coming out on July 4th and we’re so excited for everyone to see it. We worked really hard on it and we filmed this movie two years ago. Right after, we were filming season three. Season three is bigger, it’s better and stranger. Have a good one.

Q: How long do you think the show will go?

MBB: How long will it go? I don’t know. I’m not the creator. Ask Duffer Brothers. I hope a long time.