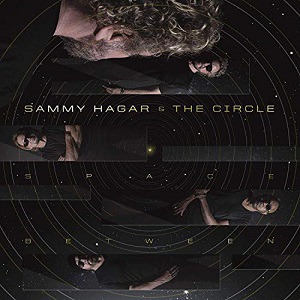 It’s the first studio album for Sammy and The Circle, formed in 2014.  Chickenfoot looked better on paper than their lack of success indicated but The Circle- Hagar, guitarist Vic Johnson, bassist Michael Anthony and drummer Jason Bonham- has mojo.

The Circle began as a live act, playing Hagar’s solo hits plus music from Montrose, Van Halen and Zep.  On Wikipedia Hagar states that with The Circle he wants to “play American folk rock with a heavy edge”, inspired by groups like The Band.  Of writing this album, on his website Sammy says “(these are) not just a bunch of new songs grouped together on an album.  They were sewn together conceptually for a complete mental, emotional and physical experience… the songs unfold like the chapters in a book.” That’s where Space Between succeeds and the Chickenfoot records did not.

It was after hearing Sammy on Paul Shaffer’s Sirius XM radio show that I bought Space Between.   This has a variety of textures, from songs like the mainly acoustic Wide Open Space which sums up the soul of the album, to rockier stuff like Trust Fund Baby, where Hagar takes the Montrose-era I Got The Fire riff and flips it on its side.  Space is an entertaining listen but it’s the heart of the songs that keep you coming back.  This is the record Sammy has needed to make since Van Halen, and it’s worth getting excited about. 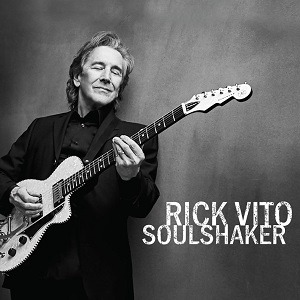 A new solo album here from one of Bonnie Raitt’s favorite guitarists and slide players. Part blues, part rockabilly, this will literally shake your soul.

You’ve already heard Rick Vito’s music- that’s him playing the slide solo on Bob Seger’s Like A Rock, he’s guested on dozens of albums, played with John Mayall, and when Lindsay Buckingham told Fleetwood Mac to fuck off in the mid 80’s, Vito replaced him for Behind The Mask.  Soulshaker is an original yet familiar feeling mix of blues, 60’s-style rock & roll, gospel and R&B that is easy to feel.  His straightforward singing style fits these songs well and his guitar playing is expressive.

Soulshaker was produced and engineered by Vito and his touch is impressive, particularly the drum sound. His guitar playing is tasty and lyrical, whether he’s playing something understated or kicking out the jams- and that’s likely what you’ll key on. Do yourself a favor and give a listen to the final track, A Change is Gonna Come- it’s the ultimate chill-out instrumental, like a late 50’s thing but slower and more relaxed.

There is blues in most everything Rick plays, but Soulshaker has more of a timeless rock & roll heart than anything else, and there’s an almost effortless grace to these songs.  It’s one of those records that you warm up to as it plays- by the time you get to the end, you’ll want to hear it again. 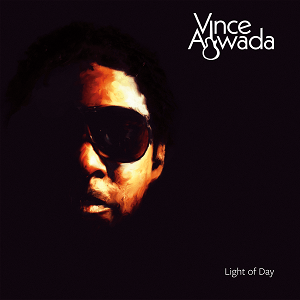 When you hear ‘south side of Chicago’, you think Leroy Brown or the blues.  Thanks to Vince Agwada you can now add rock, jazz, funk and world music to that list.  Light Of Day is a muscular mix of styles that engages and entertains- it’s a hot one.

As producer Agwada expands his palette beyond shades of blue into unexpected territories with lush string and horn arrangements plus choral touches that give the songs impact.  As a guitarist, his playing is incendiary across the many forms represented on Light Of Day, blues and otherwise, not unexpected from a veteran of the tough Chicago scene.  Two Tons Of Fun, a cheeky up-tempo number that kicks off the album, extolls the virtues of loving plus-sized women- I dig the manic slide guitar that recalls Lil’ Ed & The Blues Imperials.  As for the solo on Blue Moon Call, it will give you goose bumps.  Wanna rock out? Go to the last track Light Of Day, a song about politics and karma, or the muscular Quicksand, about a romantic place we’ve all been to.

Agwada has a rugged vocal style that gets the emotion across, inviting you further into the stories he tells.  While being largely blues-based but not entirely blues, Light Of Day sounds like I imagine Chicago feels.  I wouldn’t be surprised if, by the time this comes out July 15th, I’ll have played every track on my UDJ radio show. 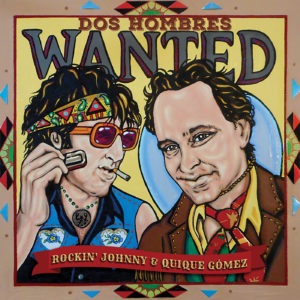 Dos Hombres Wanted is another argument for the blues as party music.  Rockin’ Johnny Burgin and Quique Gomez tear through 14 songs with conviction, chops, and a hefty amount of glee. There’s plenty of magic here, and joie de blues.

This has been sitting on my desk for awhile, passed over because the cover art reminded me of Cheech & Chong- how serious can they be?  If I knew Dos Hombres was this good I would’ve jumped on it a couple of months ago.  That these guys even got together is unlikely.  Hanging his hat in San Francisco, Burgin has a storied history with Chicago’s legendary Delmark Records and Gomez, hailing from Madrid, Spain, is a jazz-influenced blues singer who also sings Sinatra with a Spanish big band.

Songs like Funny But True have an irresistible suppleness and the album opener Your Charm Won’t Help You gets the party started in high gear.  Rockin’ Johnny Burgin and Quique Gomez are internationally acclaimed as bluesmen but even so this, their first collaboration, feels like they’ve been playing together for decades.  They split the lead vocals, Burgin’s guitar playing is pure 60’s style blues, and though from Spain, Gomez’s harp is all Chicago.

Dos Hombres Wanted is pretty cool- I hope it’s the first of many collaborations.

KEY CUTS:  Everybody Loves My Baby, You Can’t Steal My Sugar, Funny But True 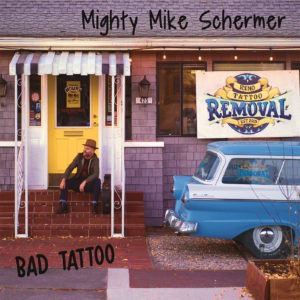 Texas heat meets California cool- that’s how Mighty Mike Schermer gets described, and that is certainly the case on Bad Tattoo.  This bad boy is a real good time.

Schermer has built a nice career as a go-to sideman for people like Elvin Bishop, Bonnie Raitt, Charlie Musselwhite, Angela Streli, Maria Muldaur, Pinetop Perkins and many more.  When Mike isn’t doing his own thing these days, he tours and records with swamp-boogie piano legend Marcia Ball.  Bad Tattoo, his 7th solo set, is as much soul as it is blues.  Mike is a warm singer and he can really make his guitar talk.  This disc is 12 original, hook-laden songs that leave an impression after you’ve heard them.

Schermer writes and sings soul music, R&B, rock & roll, country and Americana with the best of them and, of course, the blues too.  Bad Tattoo covers all of that ground with a sometimes Clapton-esque feel- witness the Lay Down Sally sensibility of Up All Night, the album closer, driven by a restrained JJ Cale-style rhythm guitar. There are no ruts on this disc where you find yourself thinking “I wish he’d try something else”, because he’s on to other grooves before you can even think it.

Mike Schermer has mastered many American music forms and Bad Tattoo covers nearly all of them.  Tatt holds up extremely well under repeated listens.

KEY CUTS:  Up All Night, I Can’t Let It Go, Bad Tattoo 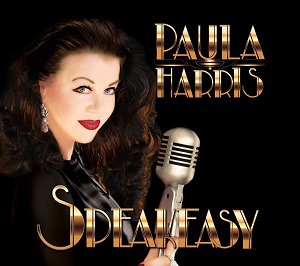 It’s not often an album leaves me breathless, but it just happened with Speakeasy. Groove-laden piano jazz with a stand-up bass backbone and snazzy in-the-pocket drumming makes this a good album; Paula’s expressive, haunting voice makes it great.

During the summer of ’87 while listening to The Best Of BB King on cassette during a road trip, I realized how deep my love for the blues really was.  Tonight, as the rest of the house sleeps and I’m strapped into the headphones, Paula Harris is doing the same thing for me with jazz.  Speakeasy is a wonderful visit to mid-century jazz with a side of blues, an acoustic album with undercurrents of soul and funk.  She’s a powerful singer too, complimented by Dan Aykroyd (Elwood Blues) in saying “She has the kind of chops to handle a ballad or shout down a 12-piece horn band”.

Dazzled as I am by Harris and her singing, props must be given to her band; pianist Nate Ginsberg, acoustic bassist Rich Girard and drummer Derrick Martin, for giving her such a rich canvas to work with.  Speakeasy is 12 tracks, but if you get the CD it comes with 4 bonus cuts including a remake of Is You Is Or Is You Ain’t My Baby.  The music is supple but not delicate- Paula really wraps herself around ballads like Good Morning Heartache, but she rocks the house too when the occasion calls for it.  It’s past the midnight hour with Speakeasy, and I don’t want to go home.

KEY CUTS:  Something Wicked, Good Morning Heartache, Do Me Good 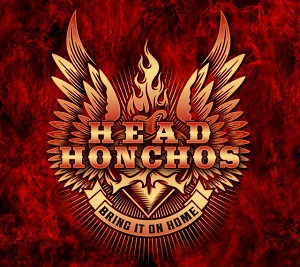 Head Honchos have just delivered a master class in leaning into it.  Bring It On Home, their debut, is raunchy, dual guitar-driven blues/ rock that shakes the rafters.

Though hailing from Indiana there’s plenty of the Deep South in this treasure chest of scrappy tunes.  Echoes of Skynyrd can be heard and felt all over this disc, recommended to fans of Johnny Winter, SRV, Robin Trower and Walter Trout- style blues badness.  Head Honchos are new, powered by the father/son guitar duo of Rocco Calipari Sr. and Jr., and they get into some serious jam action.  Rocco Sr. is a long-time member of Howard & The White Boys, and he has schooled his son well in the ways of the blues.

It’s tempting to call Bring It On Home rock & roll because the energy of the whole band is so forceful and relentless. Besides, my favorite rock is always blues-based… but this is straight up, hard-ass blues.  Nothing here gets done by half measures, and when they play nothing is held back.  The rhythm section has plenty of flex, the Hammond adds just right shade of blue, there’s some fine harp work, and the guitar solos are hellacious. Plus, they save the ballad for the end of the record.

Father & son guitar hot shots with a great band to help pull it all together; Head Honchos’ Bring It On Home isn’t just good, it’s shit-hot rockin’ blues- better get yourself some. 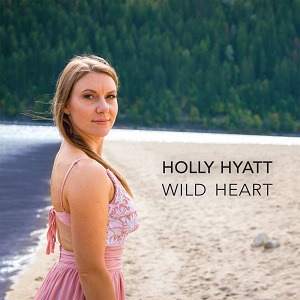 After 14 years as half of the blues duo Holly & Jon Hyatt is going it alone under her own name, backed by her 5 piece band.  The result is Wild Heart, an uplifting, vintage R&B feeling set firmly rooted in 70’s soul that’s you’ll really enjoy.

Ms. Hyatt doesn’t sound like a white chick from Slocan Valley in BC, her voice drips and vibrates with heartfelt soul.  It’s sort of Jamiroquai meets Sly & The Family Stone, an easygoing vibe that’s almost hypnotic on tunes like Gravity.  Some tasty slow jams across this disc for sure, along with lively, danceable neo-disco rhythms too that give Wild Heart a natural flow that’s impossible not to like.

Produced by Holly and band member/ horn player Clinton Swanson, Wild Heart doesn’t feel contrived or overdone, more like a throwback to when musicians played together in the studio.  Whether that’s true or not I don’t know, but it sure feels like these players are vibing off of each other big time.  Wild Heart feels like a summer from the early to mid-70’s, when songs like Crystal Blue Persuasion and Hot Fun In The Summertime were all over the radio as we burned and peeled at the beach.

Wild Heart has groove and soul by the bucket load, as refreshing as jumping in the Kootenay River on a hot summer day.