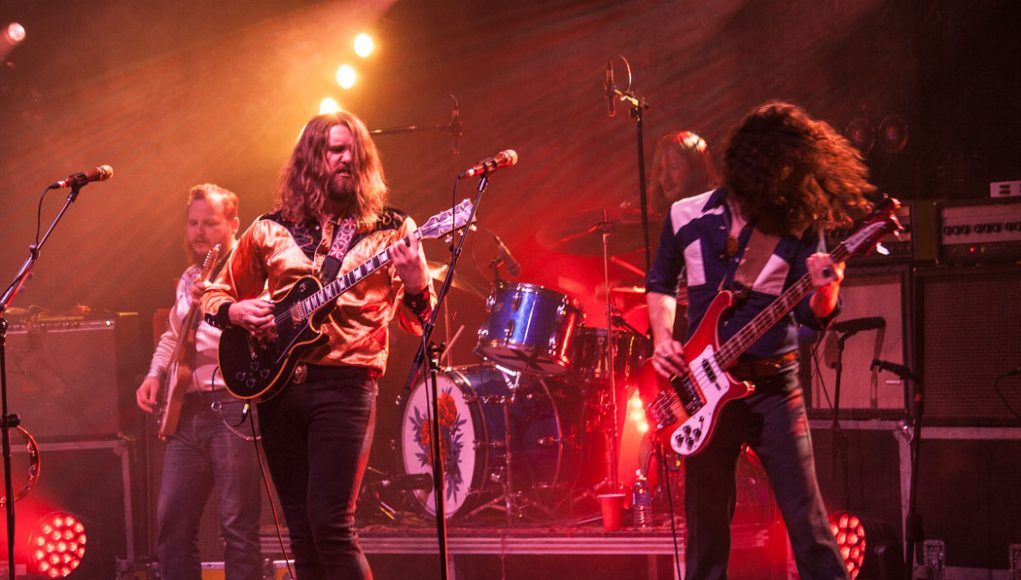 The Sheepdogs Return To Kelowna

Canadian Rockers Shake Up The Kelowna Community Theatre for their first return since 2012 and did not disappoint.

Sunday night at the Kelowna Community Theatre brought one of Canada’s most beloved rock & roll acts to town. The Sheepdogs have been a writing and performing force since 2006, gaining a massive boost from a Rolling Stone Magazine cover slot in 2011 – and the quintet did not disappoint on Sunday, February 18th. 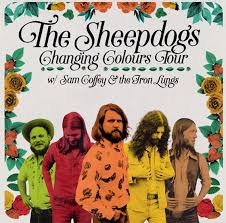 The last time The Sheepdogs came through was back in 2012, after the release of their critically acclaimed self-titled record. It was the first major-label record they had released, and since they’ve released two more full lengths including the 2018 release Changing Colours.

The visit brought some surprises – a high-energy opening act, a higher production value on the show and the relatively new member and fantastically talented Jimmy Bowskill, who joined in 2015.

Sam Coffey & The Iron Lungs set the stage at 8pm. Clad in patched jeaners, the band took their feel-good rock sound and basted the audience with it. They’re a large band for the genre, performing as a sextet they pumped out their tunes with an exciting cadence. Each member had enormous grins on their faces, and their loveable stage presence brought the audience a palpable joy throughout their 10-song set.

Sounding somewhere between The Clash and Cheap Trick, they delivered a polished take on an often overlooked type of rock & roll. Highlights from the set included individual struts across the front riser from the members, and the 4-hands on one double-necked Gibson SG while guitarist Lian Doyle lounged on Sam Coffey’s knee. It was easy to feel how excited this band was to be touring with Canadian rock royalty.

The Sheepdogs Live in Kelowna BC
1 of 9

More Than We Bargained For…

From the beginning of The Sheepdogs’ set it was strikingly clear that these shaggy troubadors had upped the ante.

The boys strutted out to a jazz number reminiscent of Soul Train, took their places and cut right into their thundering new tune I’ve Got A Hole Where My Heart Should Be. Each member was silhouetted by a 70s-style-variety-show light – warmly and proudly proclaiming “The Sheepdogs”, pulsing with the kick drum.

The Sheepdogs’ lead guitarist Jimmy Bowskill tears into the solo in “I’ve Got A Hole Where My Heart Should Be”. 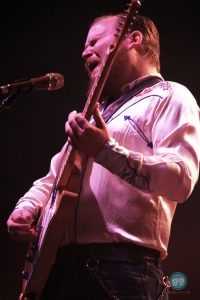 The first tune introduced the crowd to Jimmy Bowskill – Or Jim Bob as lead singer Ewan Currie affectionately called him – with a fierce and creative lead piece. If anyone in that theatre had any hesitancies about this shorter, less shaggy Sheepdog, Jimmy threw those away immediately. Bowskill is young but he fits right into The Sheepdogs’ iconic “guitar-monies” – flawlessly matching Currie’s lead parts with his own harmonizing melodies. At 28, he is already an award-winning multi-instrumentalist and can be heard on the Blue Rodeo album 1000 Arms.

He seemed right at home on stage Sunday night.

The shaggy entourage moved through their set with the ease of a well-seasoned touring band. They followed up their opening tune with another selection from Changing Colours entitled Saturday Night – a fist-pumping guitar call-back tune oozing with attitude. From here they settled into their groove rock style with the older Who Do You Belong To?, and another new one called Cool Down.

Currie confided in the audience over his red solo cup, once saying “I wish you could all just come down and dance with us […] It feels like we’re doing a production of Fiddler On The Roof up here!”

It was a light-hearted quip that earned some adoration from those who wanted to dance up front. The theatre is a great venue with a world-class sound system. In Kelowna it’s the most appropriate place in terms of capacity for a band like The Sheepdogs, but due to it’s nature can’t offer much in the way of dancing space. Regardless, the audience grew less and less “sheep-ish” (sorry – not sorry) and began to stand, clap, dance and sing along in the aisles. 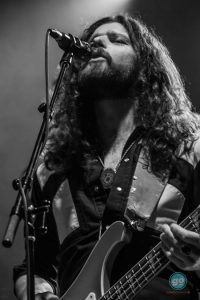 The band has grown to produce a much more progressive show which includes Shamus Currie performing on the trombone, Jimmy Bowskill featuring his pedal steel guitar and 5-string violin skills, and fantastic stage design. They are clearly growing and maturing with their experience.

The 5-string violin came out for a first-ever public performance of another new tune Just Waiting For My Time, a broody piece that’s somewhat reminiscent of some of the music King Crimson put out in the 70s.

One of the most fantastic aspects of the show were the vocal harmonies on display for all of their tunes. The band hit the oohs and aahs with deadly accuracy, supporting Currie’s distinct leads. Old favourites like Southern Dreaming and Please Don’t Lead Me On have earned some road polish and become artfully composed pieces not far from the original studio recordings, but apparent in their growth and seasoning.

The audience received more than they bargained for with this performance as The Sheepdogs laid down a 19 song banger set. As the boys left the stage and wandered into the wings after a punishing end to I Don’t Know, the crowd salivated for more while The Sheepdogs sign glowed brightly above the stage.

The Sheepdogs obliged and returned for another four-song encore. They began with two original selections, Downtown, followed by a driving rendition of Everything Is The Way It Is.

Now, here’s where The Sheepdogs’ shows are special for me. In 2012 when they came through, they brought the house down at the end of their encore with a powerful version of The Band’s The Night They Drove Old Dixie Down. It filled my personal cup of inspiration for years to come. I am a big fan of bands paying respects to their influences with well-executed covers, and this encore was no different.

Ewan called out the boys from Sam Coffey & The Iron Lungs to join them, while organ and trombone player Shamus Currie led a rousing version of Argent’s Hold Your Head Up. Shamus’ voice soared in the verses, reminiscent of a young Paul McCartney. Flanked by the denim dandies of Sam Coffey & The Iron Lungs, Ewan doled out tambourines while the crowd sang “HOLD YOUR HEAD UP – OH!”.

Not only did the crew highlight Argent’s hit, but after dropping an early easter-egg-tribute to The Allman Brothers’ Ramblin’ Man at the end of Laid Back, The Sheepdogs took the southern rock classic on in full – Bowskill nailing down the slide parts, and sharing the vocals with Ewan.

It was another night of music to be remembered led by the Sasky-proud boys of The Sheepdogs, and it’s clear that with their drive and motivation these boys have a ways to go.