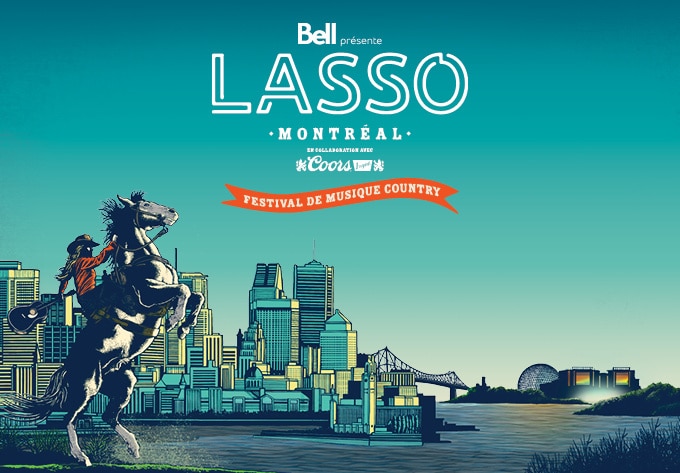 Check out the daily schedule at LASSOMONTREAL.COM

The very first edition of LASSO Montréal presented by Bell in collaboration with Coors Original is only a few weeks away and the LASSO team is thrilled to announce the daily lineups on August 12 and 13 at Montreal’s Parc Jean-Drapeau!In addition to the full-on twang fest planned for LASSO In The City on Thursday, Aug 11 with Jade Ealegleson at MTELUS, Montreal’s Île Sainte-Hélène will be the site of a massive hot country hoedown with some of the most sought after acts in the biz, performing their hits at Espace 67 in Parc Jean-Drapeau (one of the top festival sites in North America). Fans can expect chart toppers and trendsetters like headliner, Luke Bryan, one of the hottest country artists in the world; Dierks Bentley, who’s already got 17 number one hits on the Hot Country Songs and Country Airplay charts; Tenille Townes, the 4-time CCMA winner from Grand Prairie, Alberta who wowed the crowd at the recent Canada Day celebrations; Kelsea Ballerini, who has been teasing details of her forthcoming album on socials lately, and so many more. There are so many great bands  to catch at one of the most inspiring festival sites in the world – and in addition to the headliners, the LASSO team is beaming with excitement about a few new hot artists to be found in the lineup, as well:

Old Dominion – Nashville’s Old Dominion is pure feel good country music that will have everyone vibing to their sweet sounds. The group have been blessed with multiple ACMA awards over, plus the individual band members have written hits for the biggest and brightest like Kenny Chesney, Blake Shelton, and fellow LASSO performer Luke Bryan.

Blanco Brown – Hard to believe a rapper/producer who worked with the likes of Pitbull and Chris Brown is forging a hugely successful career in country music, but viral sensation Blanco Brown is the real deal. With his smile-inducing combination of beats and barn dancing, Brown is a trailer trap pioneer, who will have the entire crowd doing The Git Up!

Canada will also be represented by some of the most talented artists in the country performing their country hits.

Sacha – Hailing from a small town in Ontario, Sacha has a big career ahead of her. She’s currently a finalist in the Siriux XM’s Top of the Country Competition, which is no surprise, considering her song, What The Truck (with The Reklaws), became the fastest-ever Canadian country song in history to go GOLD.

Steven Lee Olsen – The Toronto-raised singer is best known as one of Canada’s most prolific songwriters, having penned songs for, among others, Keith Urban, Garth Brooks, Rascal Flatts, Billy Currington, The Judds, Dallas Smith, and many more. This will be a great opportunity for fans to discover his own unique voice.

LASSO will also feature some of the best local talent from Quebec‘s new vanguard of country music makers, like Matt Lang, the festival’s ambassador who played for an adoring crowd of over 80,000 fans in Quebec City last week, and continues to turn heads everywhere he goes; and Montreal’s very own Brittany Kennell, a one time contestant on The Voice, and the only Quebec female country artist to have performed at the Grand Ole Opry in Nashville.

The team behind LASSO Montréal presented by Bell in collaboration with Coors Original, would like to extend a huge thank you to fans, numerous sponsors and public partners, including: Bell, Coors Original, Ford of Canada Ltd, SiriusXM, Casino de Montréal, Monster Energy, Birkenstock, Coca-Cola, Tourisme Montréal, as well as STM for their continuous support.

LASSO Montréal is produced by evenko and Live Nation