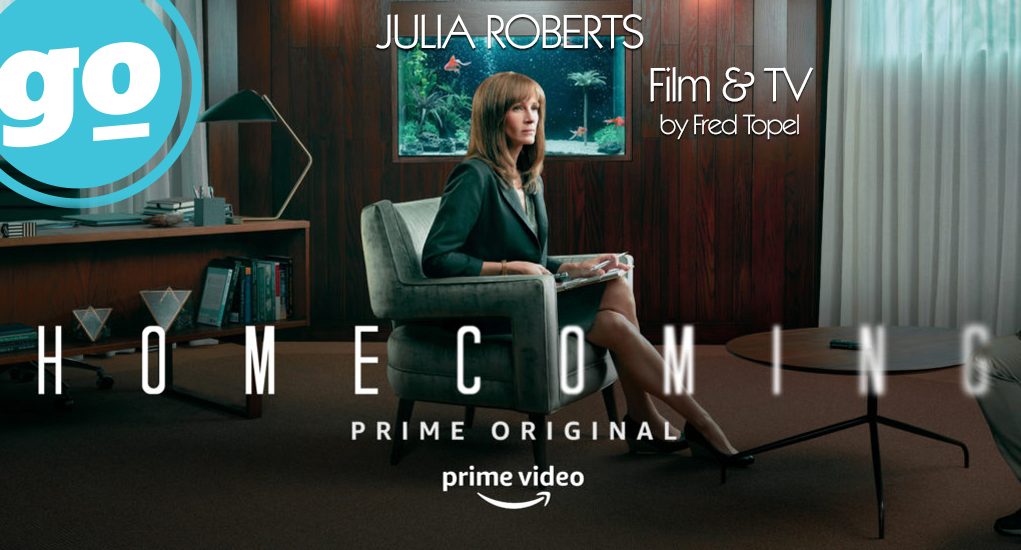 The golden age of television saw many movie stars find their juiciest roles in series. Kiefer Sutherland, Glen Close, Jessica Lange, Kevin Bacon and Winona Ryder are just a few. Well, they don’t get much bigger than Julia Roberts, and now she too is doing the Amazon series Homecoming.

Since Homecoming is from Mr. Robot creator Sam Esmail, the plot is still mysterious. We do know that Roberts plays a counselor for returning veterans who has retired, but some questions about her old cases draw her back in. Roberts was on a Television Critics Association panel to discuss her role in Homecoming and Gonzo was there. Homecoming premieres November 2 on Amazon.

Q: You got to do some fun thrillers early in your career. What was fun about returning to that genre at this stage of your career?

JR: That’s a great question. It’s a genre I love. I did get to do some great ones, you’re right. So it is nice to come back to it, especially with Sam who is so clever. His version of twists and turns are so sudden and clever, so it was really enjoyable.

JR: It is exciting. I’ve always believed that the parts that I’ve been able and lucky enough to do always came at the right moment with the right people. I think that this one, I think part of my enthusiasm is that we just finished. It’s all so fresh in your mind. You can remember it. Usually we’re doing this a year down the road.

Q: How long was the shoot?

JR: We started in February and finished in June.

Q: How was this different or maybe even better for you than working in film?

JR: Well, this wasn’t that different than film just by virtue of the way that we shot it and having Sam helm all the episodes. So we were all together in the way that you would be on a movie.

Q: Did you find television gave you more structure and stability than movies?

JR: Not really. I mean, when we worked at the studio, it was predictable driving to and from work, but then when we were on location, sometimes we were so far away. It was very much like making a movie to me. I didn’t really see much different.

Q: What film role might have best equipped you to play a social worker who transitions soldiers back to civilian life?

JR: Nothing springs to mind. Honestly, the man to my right, Sam Esmail, is what attracted me. And I just think that what Eli [Horowitz] and Micah [Bloomberg] have written is such a great sort of old-fashioned yarn set in this really modern conundrum of a morality play. And to put that in Sam’s incredibly stylish, capable hands, seemed a very safe place to be.

JR: Just a treasure, he’s just a total treasure. I loved every minute we spent together creatively, and socially. He just knows exactly the thing to say at all the right times. I mean no pressure but, yeah, I just felt that we had a great symbiotic relationship.

Q: What part of Homecoming was unexplored territory for you?

JR: It’s called the 11-page oner It was a great mental challenge every day. I kind of loved that. It became really the fuel a lot of times is how many pages are we going to get to do tomorrow? And is there going to be one shot with all of them or do we get a couple of shots to make? And it became exciting. And I think as a crew and as a cast, we all really enjoyed how challenging Sam made all the aspects for us. It’s not just about having ourselves prepared. It’s about can you be prepared and walk up and down 10 flights of stairs? And keep it going and be on the phone or do this or do that or prepare a 10-course meal while you’re juggling with your feet. And so it was exciting for the crew to figure out ways to accomplish his dreams, as well as for all of us I think. I always had a lot of props. You could take my entire career and put it all together and I didn’t touch as many props as I did in this program on a daily basis.

Q: How many takes of the long take did you shoot?

JR: It was weird. It was like the harder the task, the faster we accomplished things. It was very strange. And we were also very strangely happy all the time.

Q: With so many big-screen stars coming to the small screen, were you looking to do TV after The Normal Heart? Was it really the script that made you fall in love or was it a larger goal to kind of explore the small screen?

JR: I guess I didn’t really think of it as small screen-big screen. I don’t know. My television is very big. And I think with Sam, we were so excited to collaborate on this and what we could do with it and just what you can do with more time to shoot and more time to unravel things for people. It seemed like a great opportunity. There kind of isn’t [a difference] anymore. Everything is so good. The bar is so high. And I mean for me, it’s nice to bring something into people’s homes. We’re like a delivery service. We’re delivering entertainment right to your doorstep.

Q: Do you watching TV a lot?

JR: I wish it played a bigger role in my life. I have three young children so I’m very careful about turning the TV on. By the time we do turn the TV on, I’m usually going to sleep.

Q: Is this a character you’d like to live in a little longer?

JR: Well, I just finished in June so I’m happy to take the summer off.