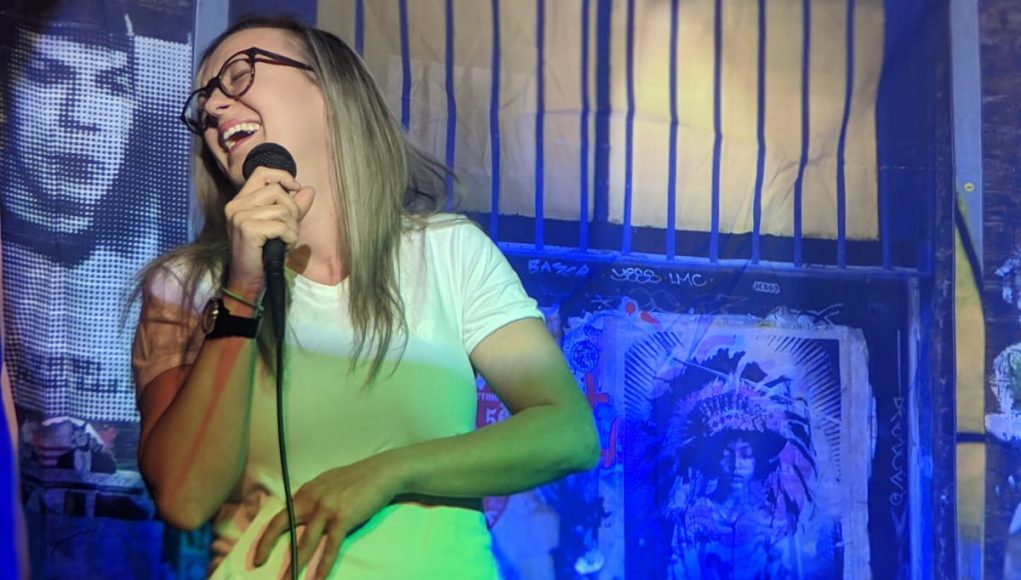 Velina Taskov’s love of animals is surpassed only by her love of making people belly laugh.

The aspiring standup comic – who has called Kelowna home since moving to Canada from her native Australia four years ago – is headlining what promises to be a great night of comedy on Saturday evening at Dakoda’s Comedy Lounge.

During the day, Taskov works very long hours at the VCA Tri-Lake Animal Hospital and Referral Centre as a surgical veterinary technician who has helped perform hundreds of surgeries on various animals.

At night, she removes her scrubs and hits the stage in pursuit of a burgeoning standup comedy career that is taking off very nicely over the past several months.

Taskov, 32, was recently named the winner as the Okanagan’s top comic and also just returned from performing numerous gigs as part of the Canada Comedy Jam Tour.

Taskov decided to make Kelowna home after visiting here to ski at Big White Ski Resort during a visit from Australia.

Taskov’s introduction into the weird and wonderful world of comedy started about two years ago when a male friend bombed out on stage.

“I’ve always been interested in comedy and I always used to go to shows (back in Australia) in every city that I visited,” she said. “I started going to shows in Kelowna and one day I matched up with a comic I met and he invited me to a show and bombed completely. It was very bad.

“I applauded his courage and he still wanted to hang out …he was like dude I would like to see if you could do better. Literally, the next week, I went up at an open mic on the same stage and I crushed it. I knew this was literally what I should have been doing for a very long time. He was upset I was funnier than him, but he remains a good mate and we laugh about it all the time.” 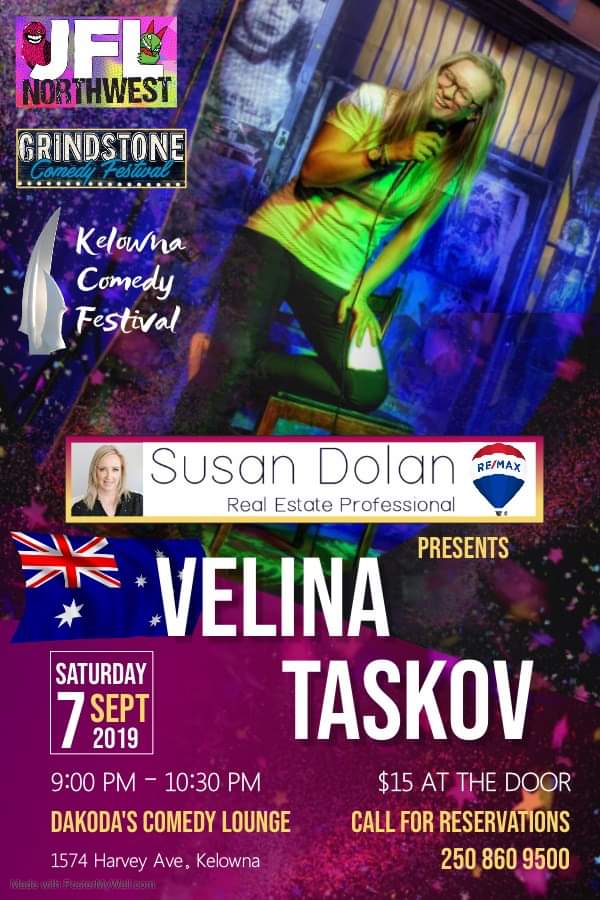 Taskov is thrilled her standup career has taken off.

“I’ve been invited to numerous festivals and was just named winner as Okanagan’s top comic last weekend … which was really awesome,” she said. “I’m trying to ride the coattails of that with this headline show Saturday night.”

Getting asked to go on a cross-Canada jaunt as part of the comedy jam tour was easily the highlight of her burgeoning comedy career, she said.

“I had a great time performing across Canada, but I’m very disappointed I never saw a moose,” she said. “It has been a crazy and exciting year for me getting to perform at all these festivals across Canada.”

She also had several gigs in southern California and also returned home to Australia in May to perform at a comedy festival in the Land Down Under, which was an eye opening experience.

“Honestly, I felt like such a Canadian … my style of comedy is much more Canadian than it is Australian,” she said. “That was interesting, but I can say I truly feel like a Canadian comic now, not an Australian one who lives in Canada.”

Taksov describes her style of comedy as observational, with a mixture of funny things that have happened in her personal life, including her job, which can often be macabre.

“I’ve learned to stay safe and talk about what you know,” she said. “I work 60 hours a week in a veterinary clinic, so a lot of my stuff is about the veterinary industry and some of the stuff is about my personal life, like dating, raging out at vacuum cleaners that don’t work and basically just trying to get through life. It’s very unfiltered and very facetious I would say.”

She also likes to “poke fun at Kelowna” and the people who live her and the obsession of so many to wear the latest trendy haircut and cover their body in tattoos.

Taskov doesn’t hide the fact her goal is to pursue a full-time comedy career and has the support of the people she works with as she chases her dream.

“I definitely want to go after this and my workplace is super supportive,” she said. “I’ve had one of my clinics actually sponsor a show I did in Kelowna. The people I work with right now are all behind me and very encouraging … telling me I’m going to go pro one day.”

She hopes to do it in Canada as she has applied for permanent residency.

Taskov’s dog Jackie attends all her shows as a personal support for not only her, but all comics on the bill.

“She comes to all my shows for support and sits out on the patio,” she said. “I call her the bomb dog because whenever one of the comics bombs, they go outside and give her a cuddle and feel so much better.”

Saturday’s show is being sponsored by Kelowna realtor Susan Dolan.

Tickets are going fast for Saturday’s show at Dakoda’s. Tickets are $15 and can be purchased by calling 250-860-9500. Tickets will also be sold at the door if not sold out in advanced. Dakoda’s Comedy Lounge is located upstairs at Dakoda’s Sports Bar and Grill at 1574 Harvey Street.