Home Contributing Writers IT: Chapter Two – Q&A with the cast 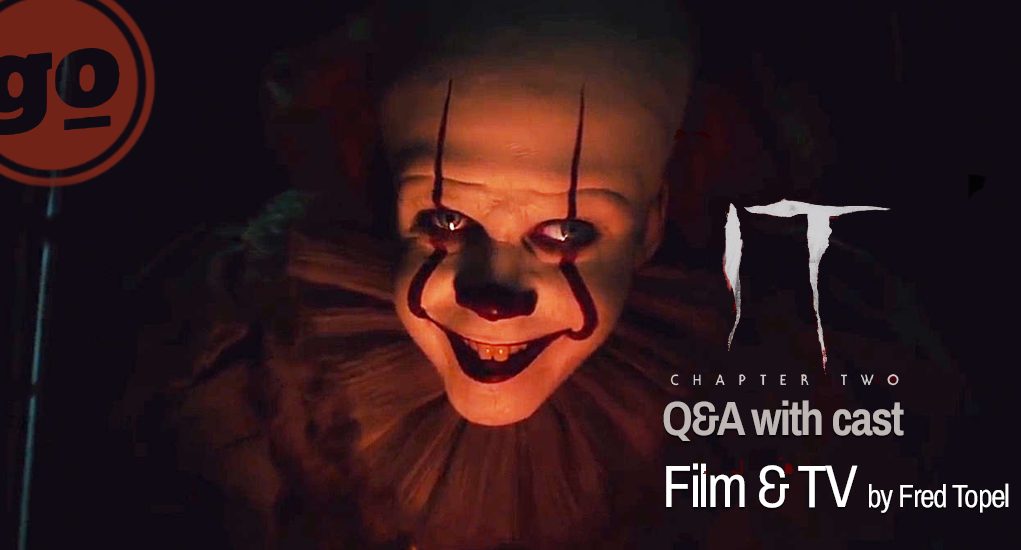 IT: Chapter Two – Q&A with the cast

Stephen King’s IT was too much book for one movie, so IT: Chapter One focused on the story of the characters as children. They saved the whole second half, when they’re grown up 27 years later, for IT: Chapter Two. The young cast are still in Chapter Two though as the characters flash back to when they were kids.

Q: When did you meet the young actors who played your roles in IT Chapter One?

Andy Bean: Wyatt and I, we had like a whole little blind date, you know, a round robin meeting all of them. Genuinely, he’s a hilarious young man. I think this started, we had a staring contest for like three or four minutes just looking at each other, like, “All right. Good to go.” He’s great and meeting these kids, they did such an amazing job in the first one. You’re just trying to not get in the way.

Jay Ryan: Jeremy Ray Taylor told me, with a very serious face, not to screw it up. Which I was not expecting from him. So that was the start of something. But his mother kind of became like a bit of my mother on set as well. So that was kind of interesting. Tracy. So he’s got a really lovely family.

Isaiah Mustafa: Chosen is the ultimate gentleman. He was raised in a Southern household. So he came up and he just started giving me compliments upon compliments. And he was like, “Oh, I like what you’re wearing.” “Oh, by the way, I like those spots you did.” And he just kept throwing compliments my way, so I naturally just melted. I was like, “Oh, man. You’re awesome.”

Jessica Chastain: Now it’s fun, but in the beginning it can be difficult talking to a teenager. Like, “Oh yeah. I used to be a teenager.” It’s hard to have conversation. So we literally stood in front of each other and giggled. And it was like, “Hey, what’s your favorite movie?”

Q: What was your reaction when you heard who was cast as your adult self? What was it like watching them?

Finn Wolfhard: I used to talk about him a lot, wanted him [to play Richie]. It’s really cool that he ended up doing it.

Jeremy Ray Taylor: I was also impressed, and my reaction to it was shocked.

Sophia Lillis: I thought she was perfect for the role so having her actually accept the role, I was very relieved about that.

Jeremy Ray Taylor: Also pressure because Andy has really high expectations for my future obviously, so I have a lot of work to do.

Q: What did the young actors want to make sure the adults got right about your characters?

Chosen Jacobs: For Mike, I think his character and his personality is all rooted in his love for his friends and his family. So the main thing was for him was, that’s already a part of him but he’s not used to having friends and letting loose and being free. So I was really telling him, of course you have responsibilities but still make sure to let your hair down sometimes and have fun, love your friends and let yourself be vulnerable.

Sophia Lillis: I think the most important thing about Beverly is the importance of her relationship with the Losers. Before she met any of her friends, she didn’t really know what a healthy relationship was. So after knowing the Losers, she realized there’s more to life than her father. There’s people who actually love her for who she is. She knew that she couldn’t let them go and I really wanted to portray that to Jessica.

Jack Dylan Grazer: You see at the end of It 1, I kind of transition out of the submissive Eddie thing. I say to my mom, “I know my life has been a lie.” Then I tell myself, remind myself don’t go back to that place. Stand your ground, have some power. It’s kind of sad that I wrote that and then he reverts back to being pathetic.

Q: What were the most emotional parts for the adult actors to do?

Bill Hader: We had to do this scene where she says, “I’ve seen you all die.” And she does this amazing performance. And then when it was on our coverage, she started doing it again and would cry and stuff. And I remember going, “Jessica, you’re not on camera. Like, why?” I’m like the laziest actor. She’s like, “I’m trying to give you something.” I was like, “Oh, is that what that is?” She was busting her ass to make us look good and I was like, “What is… why is she… did something happen today?” She’s really bringing it. And I was like, “Oh, dude. All right.”

James Ransone: I was there on set when they shot those sequences when you’re going into the house at night and then you emerge at the end in the morning. But actually, you were shooting the emergence from the new house on Niebolt Street that afternoon. You had to have the emotional part first. And Andy was really pushing you to explode a little more than the others, to really feel it.

James Ransone: But you were also like cursing, and there’s people.

Bill Hader: Oh, I was cursing. We were all cursing a lot, and then remember, all those kids were watching us. And I just kept going, “You guys are going to hear a lot of words that are not good.” I felt bad.

James Ransone: I would say scenes where I remember where I had fun. And I actually had a lot of fun with Jessica when we filmed that scene at the top of the stairs. That was one of the more memorable scenes for me to film, because I just kept trying to make you laugh.

Jessica Chastain: And you did. There were actually two little moments in this, there’s that scene and also the scene when you say, “Who are you?”