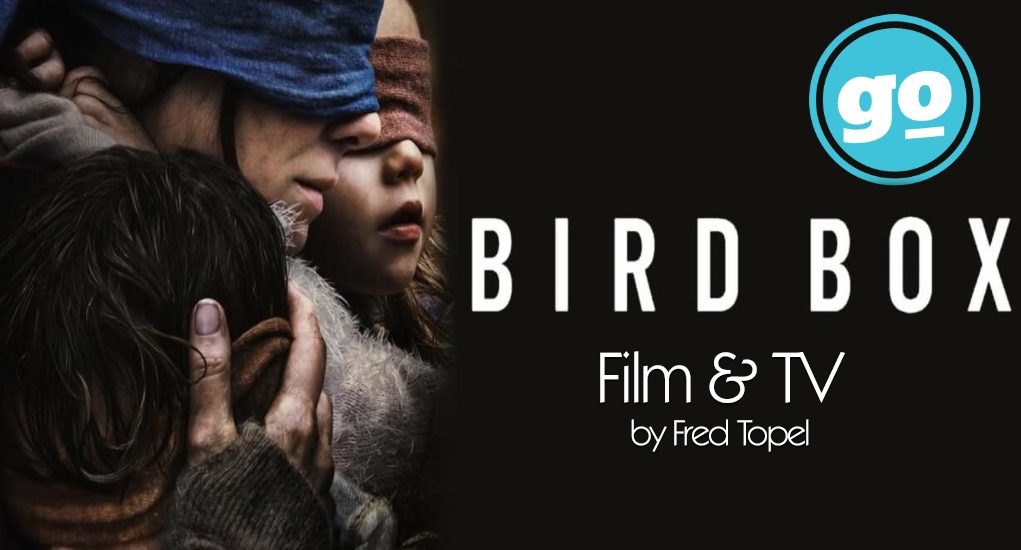 Bird Box became a phenomenon with people staying home watching Netflix over the holidays. Some people even tried to recreate blindfolded scenes from Bird Box, but don’t do that. Just watch Bird Box with your eyes open.

In a post-apocalyptic world where you can’t look outside or something will make you suicidal, survivors like Malorie (Sandra Bullock) have to get two children to safety with blindfolds on. Gonzo was at the press conference with Sandra Bullock before Christmas to talk about Bird Box, now available to watch on Netflix.

Q: What attracted you to the character of Malorie?

SB: To me, as am other and also as a woman and a human being, men and women alike, when we’re forced to deal with things that are tragic or horrific or fearful, it brings out a side of ourselves that doesn’t necessarily get tapped into. I think women especially haven’t been shown on film, that side on film. Everyone has it. As a mother, I know myself how fearful I am and what I would do for my children and what I feel myself doing for my children, and that’s just the tip of the iceberg. To be how Malorie was was obvious to me. It made sense. Wouldn’t you do everything in your power to protect your child? This is a reluctant mother and she was willing to go this far. And it’s a story about loving each other. What means the right way to love each other? I wanted a great man to be shown on film, a great father, a great lover of family. I don’t see that enough and I think we need to see it and be inspired by it. To me, it’s a film about family. It’s just about how families exist and come together. We managed to find an extraordinary man to represent what I wanted to see.

Q: Did you have to keep apologizing to the kids for yelling at them in the scenes?

SB: [Director] Susanne [Bier] said something very early on. She said, “I know what I’m going to use. I know what I need.” I went, oh my God, she already has an understanding and a knowledge of the trajectory of their journey and what she needs from them. They could be acting for eight minutes and she knows, “I only need this piece.” My journey was getting them back to their parents alive, scaring them in the moment of the scene so you get a visceral reaction, but letting them know at the very beginning it’s me, it’s Sandy. It’s going to be okay but it’s going to be loud, we’re going to drag you, this is what it’s going to feel like. There’s going to be an explosion, I’m going to say this. The minute we had cut, we would go back to being clowns for the children. I think they got that pretty quickly. Vivian is a feeler. Julian is a stuntman and Vivian is a feeler. There was a moment we had to have that gunshot scene when we’re eating the Pop Tarts. Just the idea that there was going to be a loud blast that she didn’t know and hadn’t heard, didn’t understand, affected her so much, we couldn’t even roll. You’re wrangling kids. It’s babysitting. It really comes down to when is your snack1 coming? have they had too much sugar? Do I need to do the scene without the kids? [Susanne] was able to extract exactly what she needed to build the tension and the emotion. That was Susanne. I was just there as a glorified babysitter and child wrangler.

Q: How did you prepare for being deprived of sight?

SB: We had an extraordinary coach who’s not sighted. He walked into my house and said, “Your wall is three feet, ceiling’s about nine feet.” Took him outside, he goes, “There’s a fence, some kids toys right here.” It was extraordinary. What we get to do as actors, you feel like you’re not professional being blind. We are not but what he gave us was the tools and the tricks that they use, the cane, the clicking. Make a sound, you can hear the sound bouncing off. Shuffle your feet, you hear what’s close. By the time we got on set, you’d navigate the scene. We had an amazing steadicam operator and his job was just to get out of our way should we switch directions, which happened a lot. Susanne let it go. I said if I fall, let it happen, if I hit something, let it happen unless I stop it. I only stopped it once when I drew blood.

Q: Is the intensity of a movie like Bird Box the same intensity as Gravity, or is it different for each film?

SB: This experience, I can’t come up with another word other than just frustrating and crabby. I was anxious and crabby and I realized it was because when I was blindfolded, I’m a control freak. I didn’t have the ability to control things and I kind of like that. With this cast, you had to trust, you had to rely on the fact that I couldn’t communicate to Tre[vante Rhodes] when something was wrong, something was up. I hoped he sensed it and he would figure it out. That’s what happened. Because Susanne kept us all holed up in that house, I think it was by design in that we became very in tune with everyone else and what they needed. We were sitting by, when someone had a scene, do I need to step in? Do they need me? Just very protective of each other’s journey and space and that was nice. Then I do something like Gravity and I’m in a box by myself for months flying and doing Martha Graham, pretending I see something and having an internal life. I go, why do I keep picking things where I can’t see what it is and I have to come up with it on my own? I prefer being with my costars and having that interaction. I miss a comedy. I miss that riffing. I miss that thing but I got to have it with Tre especially. We had to connect in a way that we couldn’t say a lot, but you had to feel that we were bonded and that we were family. To me, I like that in the context of a nail biter film. I want to say to the world we need to just change the narrative. We need to change our feelings. We need to change our dialogue and we need to do better when it comes to talking about kids and family and hope and loving each other. To me, this is one giant metaphor. If you had to bite your nails on the way, I go that river is motherhood. I experience that river every morning. This morning I wasn’t a great mom. I failed and I had the grief over my failure when I was coming to work here. All I want to do is go to school and take my daughter and go, “Okay, give me a do over. I didn’t do very well this morning.” Everyone’s coming away with a different metaphor from this film and I think it’s because Eric [Heisserer] who wrote it wrote things that made everyone feel something different during that nail biting journey. If you can get those two worlds together, that’s a treat.

Q: Did you learn anything about yourself making Bird Box?