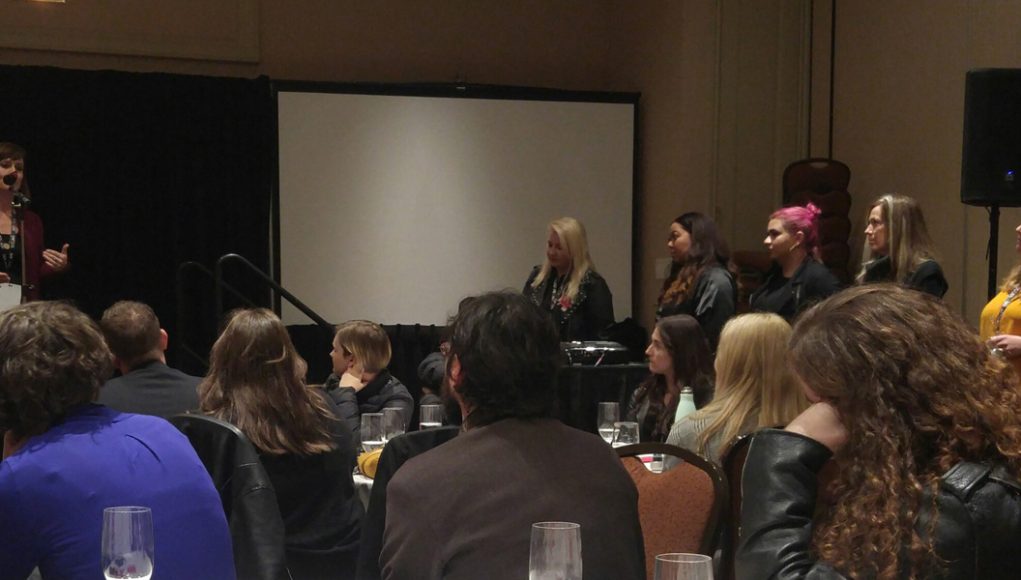 Inclusivity and Gender Equality at BOW

It was midday yesterday, and I took a quick walk along the Okanagan waterfront to breathe and recap all the notes I’d taken at BreakOut West’s first morning of conference panel discussions, held yesterday at the Delta Hotel in Kelowna, BC.

The sun was sifting through autumn clouds and I readied myself for conversation that dove into what it means for an industry to be inclusive.

“We’ve got to pick each other up, not pull each other down,” said Charlie Wall-Andrews of the SOCAN Foundation. “It’s sad that we are still fighting in 2018, but pay attention to those that are speaking about integration. Those people are our allies.”

Sarah Shandl of White Tide Entertainment was proud to announce that BOW had achieved their goals of a 50/50 split when it came to representing female and non-binary performers in this weekend’s festival, and that the conference was host to 57% female speakers.

The room spoke of a different statistic. It was chalk full of women with about five men sprinkled throughout the most packed room I’d seen at the conference thus far.

The discussion quickly opened up and asked anyone who was interested to come forward and introduce themselves, to do so in an orderly fashion. Although we were asked not clap after each introduction in order to keep things moving, none of us could help but burst into cheers when one particular woman shared her story.

“Hi everyone, my name is Lisa Schwartz. I run the Philadelphia Folk Festival. After years of being told by my male co-workers to forget my intentions, that ‘folk is just a man’s music genre,’ I decided I’d had enough. And I fired them all,” she said as the room exploded with woops, laughter, and applause.

Shortly after introductions, everyone was released into a social setting and I sat down with Laura Koch of The Kwerks, who’ll be performing in tomorrow’s Mini-BOW show for families. We talked about what it means to be a mother in the industry, something I resonate with entirely.

“There is nothing quite like driving home after an amazing gig, and walking into a house just to meet all of your children’s needs,” said Koch who was sniffling through the tail end of a cold, but cheerful nevertheless.

BreakOut West is an event where folks come together to share their different stories, be they personal or related to the business.

“It is easy to assume that no one else is a mom and that everyone is in their 20s,” said Koch pushing up her round red frames. “But this is not the case. Some of us have kids who still want mama even when we’re in our rockstar mode.”

Facing the music industry as a woman and a mother is something that not many do. But even Sage McBride of Shred Kelly is walking down the same path, with the surprise announcement that her first baby is due next March.

“How will I realistically keep doing what I’m doing?” shared McBride, determined to carry on.

“Being a mom is a creative business and it is a huge challenge to feel these two worlds clash,” said Koch, “but it isn’t impossible. I am happy to offer my experiences to people who are going to be in my position,” she added encouragingly while sipping on colourfully flavoured water.

On the other end of the spectrum, the youngest delegate Ashley Pater out of Surrey, was happy to have people to look up to.

“It’s so awesome to be in a room with a bunch of mentors,” said Ashley over several rare beef sliders. “Whoever is passionate about this industry will come out no matter their age or where they find themselves in life.”

As Koch and I finished up, we hugged. She accepts her motherhood and her industry presence as just a part of who she is.

“My children keep me grounded lest I get any lofty ideas about myself and my stardom,” she added with a big wholesome laugh and promises of a stellar performance tomorrow afternoon.