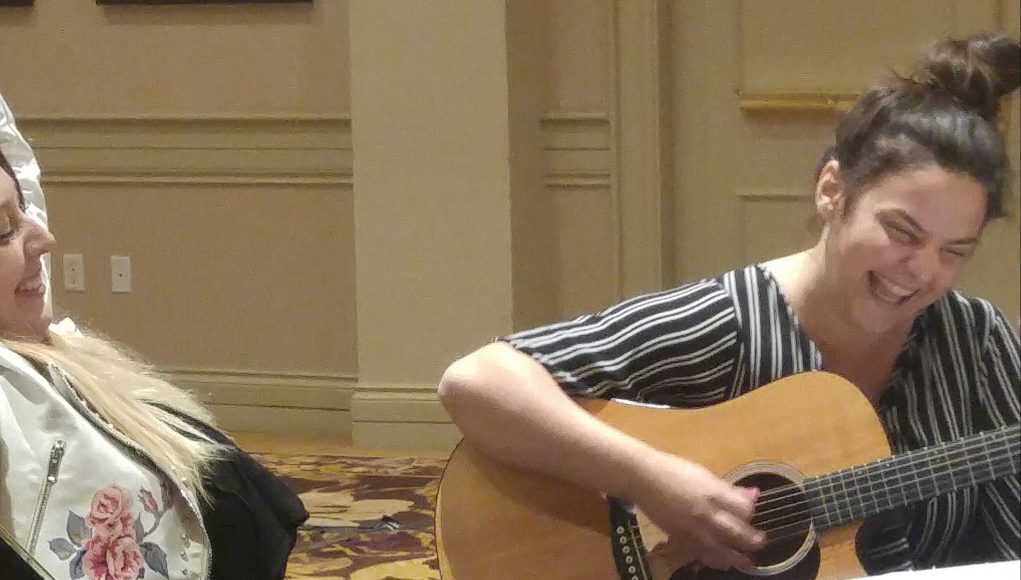 BreakOut West is on its first official day here (October 11, 2018) in Kelowna, BC at the Delta Hotel and wow what a day.

While listening to the first of many conference panel discussions held today, I heard someone singing.

So I politely excused myself to see what was happening next door.

I opened a door timidly, and was immediately welcomed by two women wielding guitars and a table full of notes.

It was Jacqueline Muzichuk of The Railtown Park Band out of Edmonton, AB, and Rebecca Emms of 80s synth pop band TOVI out of Red Deer.

I happened to walk in on two of the twelve selected delegates in the midst of their two day workshop task of co-writing a song from scratch. Lucky for us, they needed a break and we got to chatting.

Leila: Have you done this kind of thing before?

Rebecca: Its been a while since I’ve collaborated. I usually write really heavy stuff, but for this I feel like I’m going back to my rock roots.

Jacqueline: Well, this is my first time co-writing in a workshop and I am the writer for my band. So this is new.

Leila: Tell me about your process.

Jacqueline: Hehe, well Rebecca came up with the chording, which you’re awesome at-

Rebecca: Oh thanks. And she came up with the verse. Weren’t you-

Jacqueline: Yeah, I was sitting on the toilet. Just on my throne, writing a song.

Leila: Are those the lyrics? (Everyone laughs)

Jacqueline: No! Haha, I just started writing and felt like it all would fit. I love writing about dark things. I feel like I reach more depth with something I feel.

Rebecca: And then we decided it sounded deserty.

Jacqueline: So we brought the desert in with the words, and have officially named it Queen of the Badlands.

Leila: What is different about this process than one’s you undertake on your own?

Rebecca: Its refreshing. I have ideas that my voice cannot reach. But she, you have such a great voice-

Rebecca: Yeah, so her abilities are changing my songwriting. We are making a nice hybrid.

Jacqueline: Yes! It helps soo much to hear about and deal with other people’s process. I like your style so much.

Rebecca: Awe, I like yours. (More giggles). Its neat because we both have habits we might have never acknowledged without being reflected by someone else. Its so nice to be given this opportunity.

The ladies then showed me how far they’d gotten, of which I snapped a quick video before we got shut down.

Festival organizers briskly moved in to relocate them to what they called the “Songwriting Palace,” as Jacqueline’s powerful voice was drowing out neighbouring conference speaker series.

Not that anyone really minded. It is a music industry conference and festival afterall.

The 12 participating songwriters presented their creations this afternoon in a closed door session for the workshop participants.

To hear more from these two ladies look up @jackiedanielmuzic and @tovimusic on most social media forums.