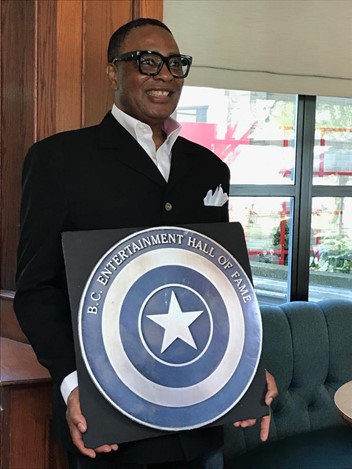 The BC Entertainment Hall of Fame (BCEHOF) previously announced that Vancouver concert promoter Mel Warner would be one of the twelve inductees to the BCEHOF. The inductees come from the world of music, dance, theatre and film/television who will join the 275+ previous inductees who have been recognized for their significant contribution to the province’s entertainment industry and cultural landscape. Due to the pandemic, we were unable to celebrate Mel’s great accomplishment, until NOW! Mel Warner was born in St. Kitts in the Caribbean and immigrated with his family to Vancouver in 1964. For over 30 years as a concert promoter, Warner has pioneered the way for reggae, ska, Latin and world music to Vancouver stages. Warner can arguably be single-handedly credited for widening the musical tastes of the city, introducing new sounds and musical tastes by taking chances on booking what might be largely unknown acts that had no local audience. Night by night, Warner and his company Melo Productions produced concerts ranging from Toots and the Maytals, The Wailers, Jimmy Cliff Burning Spear, Morgan Heritage, Byron Lee &amp; The Dragonaires, Stephen Marley, Damian Marley, Ziggy Marley and The Melody Makers, Beenie Man, Buju Banton Third World, Machel Montano, Mighty Sparrow, Tony Bennett, The Neville’s Brothers Natalie Cole, Victor Borge,  and many others—he also helped foster the local reggae music scene adding such groups as the Soul Survivors, Small Axe, Fire Temple, Phase 111 Steelband, Tropical Breeze and many more by adding them as opening acts to his concert bills.

Warner’s success might have been no mean feat in another Canadian city like Toronto which possessed a larger Caribbean community as an audience base, but in Vancouver with a much smaller scene, Warner has been perhaps an unsung hero for the amount of not only reggae, but also African and Latin world music he’s had a hand in introducing to Vancouver audiences.

Not satisfied to simply be a presence in the music scene. He has also been a fixture on the local airwaves, at the helm of the programme Caribbean Sounds on Co-op radio for over 30 years. You can catch his weekly two and a half hour show on 100.5 FM onSaturday night’s at 8:30pm. Due to the fact that Mel often has a concert he is running on a Saturday night, he often pre-records the show allowing him to be in two places at once. On the airwaves, and in the local dance halls and night clubs!

“It gives me great joy to bring out and represent my Caribbean Culture to my friends and the people of British Columbia, I hope to see you at my induction event happening during The Wailers concert at the Commodore Ballroom on June 23!”

Burnaby Blues + Roots Festival is back