Despite the fact today’s ‘Podge’ mentions both hockey and golf it is not about losers – such as the Vancouver Canucks or (snicker, snicker) the Montreal Canadiens. It’s about winners – such as Cindy, Sunset Ranch, The Younguns and other fine folk.

First Cindy – a lovely, caring single mother in Penticton struggling with the various challenges life has tossed her while maintaining a positive attitude. 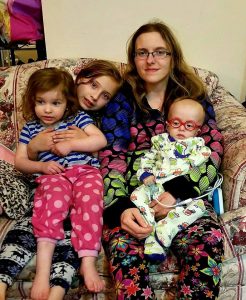 Cindy’s world was already kept busy with minding her children of seven and two years of age, however it became far more complex when her youngest child was recently diagnosed with a rare life threatening complication. Mercury, age 10 months, is battling Alexander’s Disease, a neurological complication. The average life span of children dealing with Alexander’s is seven to nine years. Mercury has an aggressive form which may diminish life expectancy even further.

For Mercury and Cindy the only source of comfort and effective treatment is through regular trips to Canuck Place in Vancouver, however with a broken down vehicle trips to the coast are difficult.

Further adding to the dilemma is that Cindy is now handling the scenario as a single mother and reliant on financial assistance to cover her rent and food. Cindy is also celiac which adds additional financial stress since a celiac mandatory diet is costly.

Enter a few local heroes in the form of Sunset Ranch Golf Course, local band The Younguns, Brad Krauza and others.

Krauza has held a fundraising golf tournament in Kelowna for a number of years, always aimed at helping an Okanagan resident in need. This year Krauza decided to try something a little different combing his two favourite things to do: play music and golf. Welcome to the Music Industry Golf Tournament Fundraiser & Festival set for June 15.

A variety of musicians will set up near each tee of the golf course performing tunes while golf players literally swing and sway to the music. Following the tournament there will be two further concerts, one at the golf course and a second one later in the evening at the OK Corral nightclub.

All profit from the event go towards assisting Cindy and family with food and medical costs.

“It just seemed like a natural blend, adding my musical friends to the mix. The response has been amazing,” Krauza, a talented guitarist and singer himself explains. “In general, Cindy just needs our help and support. I have chatted with her a great deal and I really believe that collectively we can make her world better than it seems right now,” Krauza humbly explains.

“We have worked with Canuck Place many times over the years and currently there are 24 families from the Okanagan using their services, however Cindy is the only one on assistance and desperately needing help financially.”

Krauza had no problem convincing his own band members – the Younguns to help and in addition added two well known bands Honeymoon Suite and Appaloosa to the musical performance list.

Brad’s effort has already created a winning concept since all golf registrations have been sold out for six weeks – a fantastic first year event and turnout! However there are a couple of ways readers can help.

“After the golf there is a concert, dance, silent and live auction taking part to raise dollars and support and we could most definitely use some quality items for the auctions.

“Any business or individual who may be able to contribute would be greatly and truly appreciated,” Brad says.

Anyone wishing to assist may contact Krauza at 250-899-2112  or by email at golf@gonzookanagan.com

Concert tickets are available at Sunset Ranch Golf Course and online at https://gonzookanagan.com/product/concert-ticket-honeymoon-suite.

Music fans have another event to mark down on their calendar as well. Rann Berry and the Time Machine are ready to take you on yet another musical ride back to the 1980’s.

On June 29 Berry and his band of merry music makers will take their talents to the Forum on Ethel Street and set the dance floor on fire with smoking hot songs from the past. Rann’s ‘throwback’ themed concerts are always worth taking in.

“We spent a lot of time carefully choosing some of the most memorable and iconic 80’s hits, and even gone as far as to track down authentic 1980’s vintage instruments to perfectly duplicate the synthesizer/guitar driven sound that defined the decade,” says Berry.

The show features a six-piece band that faithfully recreates the hits of artists such as U2, The Police, Simple Minds, Tears For Fears, The Cars, Duran Duran, Wang Chung, AC/DC, The Cult, David Bowie, Prince, Michael Jackson and more!

Speaking of ‘old music’ on Saturday, the same night the Vegas Knights will take a 2-1 series lead in the Stanley Cup finals (note the sneaky prediction method) Gary Smyth will turn 65.

Gary is not only a talented guitar player but he is a wonderful person and good friend. Even if he is getting really old.