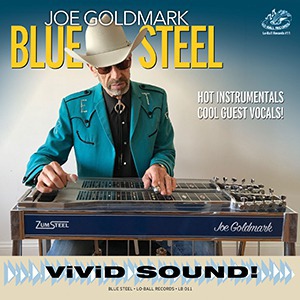 What an unexpected delight!  I’ve never been a fan of pedal steel and how it’s been abused in country music, but Joe Goldmark’s new album is changing some of that prejudice.  A collection of vocal and instrumental cuts, originals and cover songs, Blue Steel is a blast of fresh air.

“Although the pedal steel guitar is considered a ‘country’ instrument by many, I’ve placed it in other musical genres with excellent results” says Goldmark. “Blue Steel is colored by a soulful approach to all the tunes, especially on the handful of blues numbers.”

Joe was joined in the studio by a cadre of Bay Area musical notables at Red Rooster Studios in Berkeley.  He doesn’t sing on the disc, handing those duties over to ex-Hoodoo Rhythm Devils lead singer Glenn Walters, plus chanteuse Dallis Craft, who share the 7 vocal performances here.  Produced by Goldmark Blue Steel is, frankly, a beautifully recorded album with the instruments and vocals well placed and mic’d.  It’s not often I say it or feel this way, but in listening to this album several times now, I can’t think of a thing I’d change production-wise.

The album cover, a photo of Joe Goldmark playing his pedal steel scared me, but the title intrigued me.  I could’ve easily let Blue Steel languish in the considerable pile of CD’s on the desk waiting for a write-up, to be ignored and forgotten, but taking the fat chance has meant a handsome pay-off.  I like Joe’s spirit, I enjoy his playing, these are some cool songs, and I look forward to sharing some of them on my show for United DJ’s. 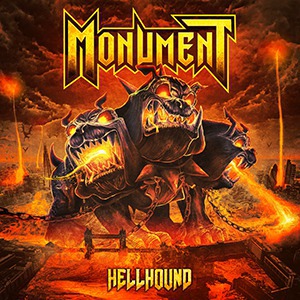 It’s the 3rd time out for this band of Brits, trading in a classic 80’s metal vibe- melodic, riff oriented, not unlike mid-period Iron Maiden.  Muscular and powerful, it’s time to put on some denim & leather and throw the horns.

I don’t know if the twin guitar attack is a strictly a British rock & roll invention but plenty of their bands use it- Judas Priest, Iron Maiden (well, they have 3) and Monument.  Lyrically, Hellhounds draws inspiration from history, London’s urban life, the occult, and personal relationships, “from different sources and situations, like I usually tend to do” singer Peter Ellis says simply.

Production for Hellhounds is by Tony Newton, who produced Iron Maiden’s recent The Book Of Souls: Live Chapter, which has me wondering if the striking similarities are his doing or that of Monument.  Having said that, they could do a lot worse in terms of influence or inspiration than Maiden.

If someone were to throw Hellhounds on and say it was a lost Iron Maiden record from their Powerslave era, that would be believable. I like the chunky riffery and Ellis is a good singer, but he sounds a little to close to Bruce Dickinson for comfort, especially his vibrato.  Nothing against the band, but from some of the melodies to the galloping rhythms it’s all a bit too derivative to stand on its own and make much of a dent in terms of action or record sales.  The guitar solos are pretty hot (Dan Baune, Lewis Stephens), the band’s playing is tight and I’m getting off on it, but there’s something about the sound of the kick drum that rubs me the wrong way, how it sticks out almost too much, at least as much as the vocals.

Hellhounds is a decent enough record and these guys are all clearly talented players, but I think they need to find their own voice.  The album proper is 9 cuts and 3 bonus tracks are available, including a surprisingly decent cover of Rainbow’s Long Live Rock & Roll. 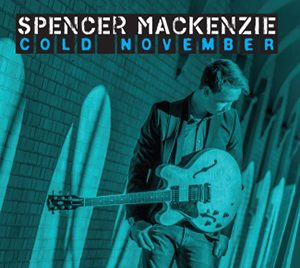 This young man continues to impress.  Cold November is his second album, following 2016’s stellar debut Infected With The Blues. If you like your blues flavored with a dash of jazz, you need to hear this.

At the age of 18 MacKenzie is already a Maple Blues Award winner and Move On Down The Track, one of the cuts on his startling new album, is a finalist in the blues category for the 2017 International Songwriting Competition.  In the hands of a talented young musician like him, the blues has a vibrant future.  Cold November is 8 originals along with covers of Robert Cray’s You Move Me and Gary Clark Jr.’s Next Door Neighbor Blues, a cut produced by the legendary Eddie Kramer, with the rest of the disc produced and mixed by Dean Malton.

I suppose comparisons to Jonny Lang- particularly the early portion of Lang’s career- are inevitable, but they are two distinctly different yet equally enjoyable musicians.  Mackenzie has serious blues ‘n’ jazz chops and isn’t afraid to blur the lines when he plays.  He’s a tasty slide player and his leads are exquisitely emotional, often saying as much or more than the lyrical content of any given tune.  The blues is a feeling, one that can’t be denied or suppressed, and on this disc Spencer ain’t suppressing a damn thing.

Turn the lights down low, sip something brown that tingles on the way down, put your feet up and let Cold November wash over you.  This album isn’t just to be listened to, it should be savored.  Beautiful stuff.

KEY CUTS:  Cold November, Move On Down The Track, Next Door Neighbor Blues 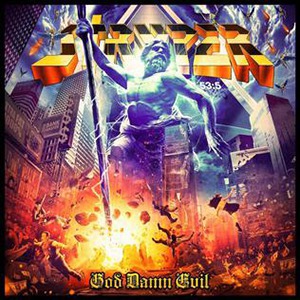 Here is Stryper’s 12th studio album, and the fans couldn’t be happier.  Rave reviews and chart action aside, the band has really hit their stride with God Damn Evil.  Epic, riff-powered classic metal, the band has been on a comeback rampage since 2013’s No More Hell To Pay.  It’s apparent they have no intention of slowing down.

A name like God Damn Evil was bound to stir up a hornet’s nest of controversy, which I’m sure didn’t surprise the band.  Christian retailers have refused to stock the CD, and Walmart too. “We’re  disappointed” says singer/ guitarist Michael Sweet.  “Our album title is a statement that’s needed in our society.  We’ve seen evil rise to new levels and this title is simply a prayer request asking God to damn or condemn all the evil around us.  It’s frustrating to see something meant for good get misinterpreted and misunderstood.”

Titillating publicity is meaningless if the music doesn’t hold up, and boy does it ever.  The musicianship is excellent, particularly drummer Robert Sweet (Michael’s brother) who provides a robust spine for each of the tracks to hang from.  After a quite public falling out with bassist Tim Gaines Perry Richardson was recruited, but scheduling conflicts prevented him from participating in the recording and John O’Boyle filled in on his behalf, according to Wikipedia.

Produced by Michael Sweet, where God Damn Evil differs from No More Hell To Pay  and The Fallen is a more melodic, slightly less relentless (though still heavy) approach.  As Michael is the main songwriter I’m picking up more of his pop sensibilities here that he and I discussed on the phone in late 2015, which I think gives GDE broader appeal.

God Damn Evil is the latest notch in the belt of Stryper’s incredible resurrection, pun certainly intended, and don’t be surprised to see it on several ‘best of’ lists at the end of the year.  It’s a wrecking ball of a rock record. 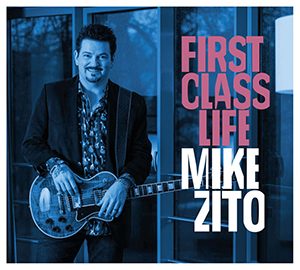 One of my favorite guitarists of recent years is back with a spectacular new album.  Mike likes to rock but on First Class Life, he dives headlong into the blues with inspired results.

Of the title track, Zito says it’s “a nod to where I’ve come from and where I’m at”- his promising early career was almost destroyed by addiction. “It’s a rags-to-riches story, and it’s certainly true.  I grew up poor in St. Louis, and now I’m traveling the world to sing my songs.”

First Class Life, recorded at Mike’s new backyard studio, has a fun and joyous vibe.  It was recorded last November, and quite quickly.  “We planned 3 days for the session” he says, “but had all the tracks finished the first day.  The band was really on fire.”  The disc has a loose, ‘go-with-the-flow’ kind of feel- it’s the sound of everything falling into place exactly as it should, and that’s pretty exciting to get next to.

First Class Life is loaded right to the very edges with killer songs.  Old Black Graveyard is about a forgotten cemetery of poor black Americans near Zito’s home in Beaumont, Texas.  Blind Willie Johnson is buried there, and the song is a ghost story about the spirits rising in the night to wreak havoc.  Dark moments like that are offset by songs like Mama Don’t Like No Wah-Wah, written with Bernard Allison about Allison’s time playing with Koko Taylor, who didn’t want effects of any kind on the guitar.

I could spend another hour talking about First Class Life, but it’s time for me to shut up so you can go and give this a listen too.  This is ballsy blues you can use.

KEY CUTS:  Old Black Graveyard, I Wouldn’t Treat that Dog The Way You Treat Me, Mama Don’t Like No Wah-Wah 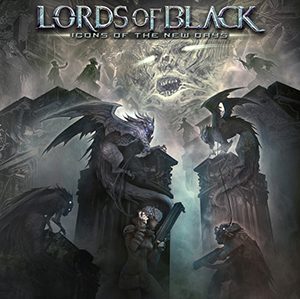 ICONS OF THE NEW DAYS Lords Of Black (Frontiers) ****

Spanish metal, anyone?  This is their 3rd studio album since forming in 2014 and, thanks to singer Ronnie Romero’s association with Ritchie Blackmore’s Rainbow, people are giving this band the once over.  I, for one, really like what I’m hearing.

The vision when Lords Of Black first got together was to play metal with a modern approach yet be catchy, melodic and progressive.  When Blackmore signed up the Chilean born Romero to front a new incarnation of Rainbow, he touted the singer as “a cross between Ronnie James Dio and Freddie Mercury”… I mean, how can you not be curious about that?  Still, I think Ritchie sold him short- there’s a lot more to this cat vocally, and Icons Of The New Days is your proof.

Icons reminds me somewhat of Stryper’s new album, but that could be because I was just listening to it yesterday.  If you’re into powerful (but not blast beat) drumming, and walls of nasty, distorted but melodic guitar get your motor runnin’, few albums put out so far this year will show you a better time than Icons of The New Days.  Guitarist Tony Hernando and drummer Andy C. had previously worked together in “Saratoga”, and that musical relationship continues to bear fruit here with guitars and drums in virtual lockstep to dense and powerful effect.

I would guess that Ronnie Romero took up with Blackmore at least in part to shine some of the spotlight on Lords of Black and it seems to have worked.  Would I have even opened the download without that?  Probably not.  Lords Of Black is still a young band and they’re just getting warmed up.  Anybody that says or thinks rock and metal are dying needs to put Icons Of The New Days on and just shut up.  Powerful and inspiring is what this disc is.