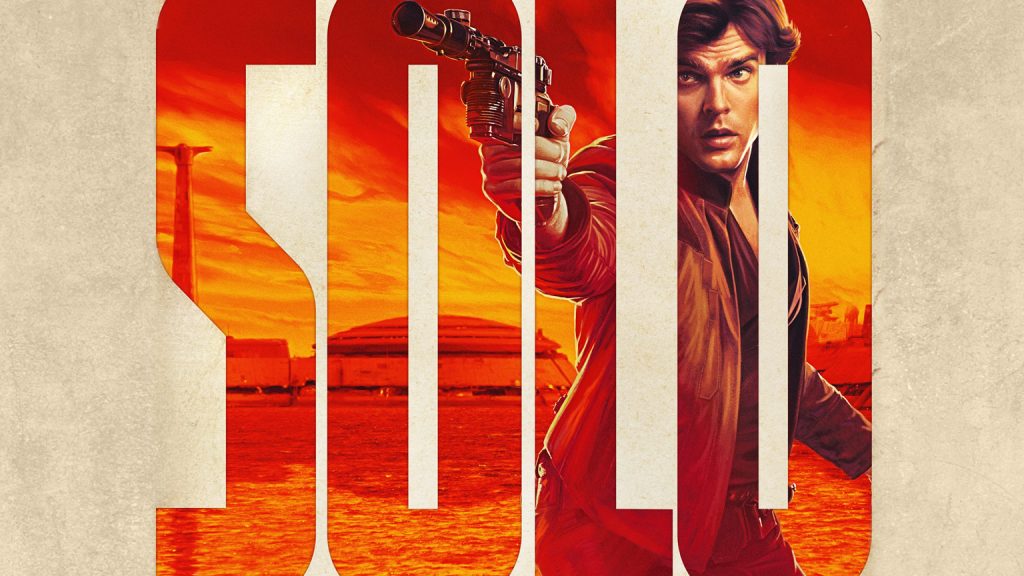 Harrison Ford has tough shoes to fill, so perhaps Alden Ehrenreich deserves all the credit in the world for even trying. He’s cast as Han Solo in Solo: A Star Wars Story. The spinoff tells the story of how he met Lando Calrissian (Donald Glover) and his relationship with Q’ira (Emilia Clarke) which is new to the films.

G: Since you came to the movie late, how hard was it to still find the perfect role for your brother Clint?

RH: Well, it was pretty damn easy. You know, I did come in fairly late and there was a lot of work that Phil and Chris had done. Unfortunately, creative differences, there was a circumstance where they were not going to carry on. Within that, there were a lot of things that were really strong and already worked and we knew we were going to keep and other things that hadn’t been done yet. And other scenes that I was given the opportunity to experiment with and explore. I sat down with [screenwriters] Larry and Jon [Kasdan] and started talking about this, that and the other. There was this great scene with L3 and it just sort of came up in conversation that L3 needs  somebody to be pissed off at. And I said, “My brother!” He gets so upset and it’s funny when he’s doing it. The fact is I love working with him. He’s a great character actor. He’s funny, he’s smart, a great team player and he’s not in all my movies because if there’s not something really juicy and fun for him to do then I don’t cast him. In this case, I knew it would be fun and he had a blast doing it.

Q: What challenges did you have creating this morally ambiguous world for Han Solo?

RH: Well, so much of the heavy lifting had been done by the screenplay and then the great casting, which preceded me. So what I love is collaborating. I love collaboration. I loved collaborating with this cast and rallying behind what an opportunity that I think we all believe audiences can really enjoy. It was always just what can this thing be? What else can it be? What are the other choices? Engaging incredibly talented and creative people to maximize what was a great opportunity.

DG: That’s my favorite part of the movie really. I love that they’re like rich people and poor people in this movie. You can go to the airport and you can see immediately who’s rich and poor, why they’re there. I just love it. That was part of getting to see why Han is complicated. Even by the end, maybe he did the wrong thing for the right reasons or maybe he did the right thing for the wrong reasons. That’s how everybody has to live. It’s a lost world out there. I really love that that it’s not simple.

RH: But what surprised me was how complicated and exciting and fun it was to stage the big action scenes, which is something that I hadn’t done in a long, long time. They were complicated. Sometimes it was hard. Sometimes it was physically difficult. We would change things and add and revise but the excitement was again making the action scenes be cool, be Star Wars but really be about testing Han Solo. What does this mean? What does this tell us about Han Solo? It sort of defined the way the action scenes would be cut, shot and rolled out. It was challenging but it was really fun and exciting. It was the biggest surprise for me what a blast it was to do the action. 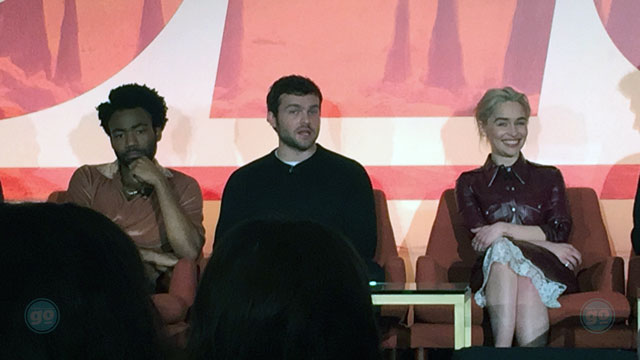 Q: Alden, how much did you study Harrison Ford?

AE: Yeah, the way I went about it pretty much was to watch the original movies very early on. And just kind of absorb as much as I could, both of mainly the character, how the character was operating in the world and Harrison. The whole Star Wars universe which is so rich and there’s so much to it, I tried to take in as much of that as I could very early, because I had the role for quite a long time before we actually shot. Then working on the part, I put all that aside and forget about it and then play this guy where he is now in his life was the most important thing, that it feels like a real person. So yeah, then I kind of moved into working on this story, this moment in time.

Q: What was it like meeting Harrison Ford when he crashed your interview?

AE: Unbelievable, oh my God. So I had lunch, right before we started shooting, I wanted to talk to Harrison just to pay respect and have him give us the blessing for the film. We had lunch I guess two years ago or something and he was really encouraging and really supportive. Then we went off, shot the film and everything like that. Today, I was doing an interview and they were talking about “is there anything else you’d like to ask him?” I was like well, I don’t know. And they’re like, “Well, you’ll have your chance” and he was behind me. He was just so effusive about the movie. It meant so much to me and I know for Ron and Kathy [Kennedy] and everybody, it’s just such a huge deal to have him really genuinely love it, really genuinely enjoy the film and it meant a lot to me that he took the time to come out here and do that. It was awesome.

Q: Emilia, what was it like playing this femme fatale in the Star Wars universe?

EC: Yeah, playing mysterious is quite a difficult note, I’ve got to be honest. It was really fun. It’s really difficult to talk about because she is pretty mysterious. You need to keep tabs on her throughout the movie so when I’m promoting the movie, I can’t say too much about her. She’s one of the harder ones to discuss. We meet her quite early on with Han and they’re separated for whatever reason. When we find her again, she seems to have lived a pretty dark life in that time. So when you re-find her, you can’t quite figure out what it is that’s happened to her in the time that you haven’t been with her and who it is that she is now. I think that’s a questions that keeps coming up throughout the movie.

Q: Donald, do you have a favorite cape?

DG: I had at the end of the film a tiny white little summer cape that stops right here. It’s not functional at all. It’s literally just to here.

DG: Well, the function of the longer ones, you can get cold. A summer caper is literally just a little fabric on your back. It makes a statement, like I’m not giving up on this cape thing. So I love that cape because it’s really all flair. I wasn’t able to bring any capes home with me. I’m sure Star Wars has that under lock and key, but the fur cape I had, they had extra material and they made a pillow out of it for me. Now I have a pillow that I try to wear as a cape.