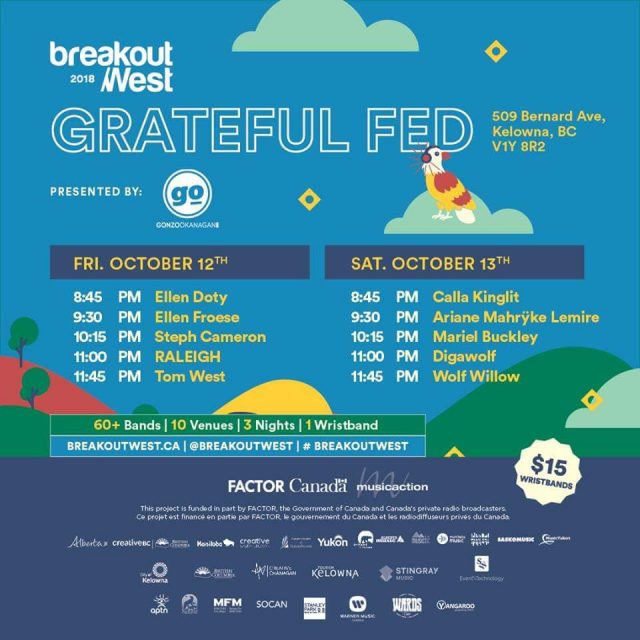 We are very excited to be presenting these 10 fantastic acts who will be performing on October 12 & 13th at the Grateful Fed, downtown Kelowna BC in part of the 2018 Breakout West event! Please take a few minutes and mark this venue on your schedule of places to go. We would love you forever if you could share this post as well!

Check out the artist bios below!

Ellen Doty is a soulful Canadian vocalist and songwriter with a world-class voice. Her music incorporates everything from jazz to soul, folk, pop and indie music: a sound that is uniquely hers. A true storyteller whose works are as intimate and as personal as their handwritten lyrics, Ellen’s immense talent for songwriting is only complemented by her stunning vocals. Doty recently signed a record deal with Toronto-based label Alma Records, and her new album came out on Universal Music in Canada on March 2nd, 2018, debuting at #1 on it iTunes Jazz Chart. The album has received rave reviews from fans and media alike: “By pushing her artistic boundaries and refusing to be placed in a box, Doty achieved musical brilliance that sets her apart from her peers.” – Beatroute Magazine. Her album release is to be followed by an 18-show Canadian tour this spring, with plans for touring in Europe in the fall of 2018. Named one of the top 35 Canadian jazz artists under 35 in 2017, ““With an honesty and warmth that sets her apart from so many artists, Doty is an emerging Canadian talent who is clearly one to watch for 2017 and beyond.” – CBC Music

Hailing from a dairy farm in central Saskatchewan, young hip-swinger-folk-singer Ellen Froese is not Joan Baez or a sheep, but the vibrato in her voice may suggest otherwise. As a folk artist performing solo and with a backing band, and a member of bluegrass/folk group In With The Old, Froese has been balancing multiple projects for the last few years. Ellen released her second solo album in Fall 2017, and followed it up by touring Western Canada. In music blogger Andy Mcnab’s words, the album “…finds a certain amount of world-weary self awareness that proves comforting in the face of the weight of the world. At the end of the day the highest compliment I can give is that these are great songs, boiled down to their core essence that really cut straight to the heart in all the best ways. It’s really that simple”. Terry Pugh of Clark’s Crossing Gazette says of Ellen, “[she has] superb songwriting skills, versatile musicianship, and an unforgettably sweet voice”. Whether performing a folk traditional, a rock ‘n’ roll classic, or her own tunes, Froese does it with an air of authenticity – all tempered with a healthy dose of self-deprecation. Recent performances include Breakout West, Halifax Pop Explosion, and Folk Alliance International.

The Saskatoon-based roots singer/songwriter arrived on the scene like a bracing gust of fresh musical air with her 2014 debut record Sad-Eyed Lonesome Lady receiving unanimously enthusiastic reviews. “This is a monumental, brilliant album… heralds the crowning of a bright new talent,” declared Pop Matters in calling it the #1 Canadian album of 2014. No Depression termed it “a stunning debut,” while Exclaim! noted that “Sad-Eyed Lonesome Lady delights from start to finish. Steph Cameron is the real deal.” The record also made the coveted Longlist for the prestigious Polaris Prize in 2015. Look for music scribes to again reach for superlatives to describe Daybreak Over Jackson Street as Steph’s new album navigates subtle changes in stylistic terrain. If the debut felt as if it emerged fully-formed from the bohemian streets of Greenwich Village circa 1963, then the extra maturity of Daybreak gives it more of an early ‘70s Laurel or Topanga Canyon atmosphere.

Unafraid of both straight-up hooks and experimental song structure, RALEIGH is a band carving their own space in new music. Thoughtful refrains are woven by vocals, cello, and guitar, with drums and bass treading the groove together. It is indie rock, damaged by art, delicate and exposed, but intimately pointed. RALEIGH’s latest release, ”Powerhouse Bloom” is a multivalent lyrical and sonic exploration showcasing a band that has found their voice, deconstructed it and is continuously evolving. “Powerhouse Bloom” features performance from Broken Social Scene members Brendan Canning and Charles Spearin, as well as production from Grammy Award Winner, Shawn Everett, and Juno Award Winning engineers Nyles Spencer, and Graham Lessard. The album is a journey through equal parts art-damaged rock, hazy psychedelia, and fluid soundscapes glued together by an ambitious pop-tinged appetite. Simultaneously edgy and atmospheric,”Powerhouse Bloom” maintains a magnetism throughout. Here, RALEIGH has managed to harness the experimental into a gripping collection of cohesive musicality.

Tom West is an Australian singer-songwriter performing music that traverses the rocky and undulating ground between simple, whimsical folk tunes and grand and moody soundscapes. Delivering shows where his purposeful songwriting, unforgettable voice and intricate arrangements come to the fore. Effortlessly shifting between performing solo or with his band where banjos, saxophones & guitars complete the ramshackle wall of sound he has drawn comparisons to the likes of Volcano Choir, Andrew Bird, The Lumineers, Of Monsters & Men & Ben Howard. West’s latest work explores new boundaries in his writing and composing. Current single “Got It Cheap” is drawn from West’s upcoming album that was composed over a two-year period during which time he was influenced strongly by the sudden and traumatic death of his father & mentor. “Got It Cheap” is a reflection on the disposability of the routines modern life imagined during dream-like walks through the Australian suburbia. Open tuned banjo plays off against West’s old Stratocaster before the song collapses into riffs and swells into dream-like changes. The new music was recorded between a makeshift studio in the Adelaide Hills, in his home, and Nashville, where the project was mixed and co-produced by Collin Pastore (Lucy Dacus). 2018 has seen West’s songs resonate with new fans around the world. Additions to major Spotify playlists and consecutive ads to radio in his native Australia confirm the songwriters ability to connect with his booming number of listeners. Armed with a new repertoire of songs and stories following on from years of performing, writing and traveling between Australia, Europe & the Americas West will be touring his upcoming material to the USA in the latter half 2018 and beyond.

Calla Kinglit is a musician, songwriter and poet who draws inspiration from the awe of wilderness and exploring the human experience. In 2018 she released her debut album comprised of songs written while living as a researcher in the Congo Forest Basin, exploring the vast and redemptive beauty of her home base in the Yukon wilderness, manoeuvring through landslides in the Himalayas, and contemplating the spiritual journey of one small being. Calla’s music is characterized by haunting melodies combined with deep wilderness based lyrics. She is a multi instrumentalist, primarily writing on warm hollow body electric guitar. Calla’s first singles have been on rotation on CBC North. In 2017, Calla received standing ovations for performances at Atlin Arts and Music Festival and Dawson City Music Festival, and placed in the top 25 in CBC Radio’s Searchlight competition. “The appeal of this song [God River Waltz] is borne in Calla’s strong vocal range, both immovable and light, weaving and situated on her band’s stripped-down instrumental composition. The song has a classic sound carrying with it memories of the Canadian folk tradition, while announcing an exciting new voice. Calla will be one to watch.” — Louis Calabro, Canadian Screen Awards/Prism Prize.

The exploratory and adventurous music of Franco-Albertan Ariane Mahrÿke Lemire is an organised chaos. Her vivid lyrics, and the melodies that carry them, create folk-poetry with notes of rock, beatnik and at times a little country. Through an authentic and natural stage presence, she invites audiences to journey between laughter and sighs, with her light anecdotes and intimate avowals.

Through her participation in events such as the Festival en chanson de Petite Vallée in Gaspésie, the Coup de coeur francophone in Montreal, the Rencontres d’Astaffort in France and the 2010 Vancouver Olympics, she has become a seasoned musician.

Four time nominee and two time winner of a Western Canadian Music Award, Ariane is a prominent figure in both the English and French music community of Western Canada. This past summer, Ariane was accepted into the artist in residence program at the National Music Centre in Calgary.

Whether performing for a small crowd in a coffee shop, or on a large outdoor stage for events such as Canada Day and New Years Eve, Ariane invites us to kick off our shoes, and delve into her poetic, quirky, and touching universe.

Few performers combine the lyrical heartfelt authenticity of classic country music with a steely eyed intensity that compels an audience’s attention like Calgary, Alberta’s Mariel Buckley. Amidst a sea of neon-Nashville superstars, Buckley offers a crunchy, roots alternative. Poignantly raw lyricism and thoughtfully arranged melodies are carried by her timeless vocal delivery – to create a listening experience both unique and captivating. An emerging live performer, with opening slots for k.d. lang, Daniel Romano and Hayes Carll, combined with an impressive list of Canadian Festival appearances, Buckley deftly matches her stark and haunting narratives of real-life struggle with a brassy wit that sets her apart from her contemporaries in its fearlessness. Her strengths as a songwriter are exemplified by her self-titled EP, and full-length debut Motorhome. She’s been hailed by No Depression as, “a new Loretta Lynn, speaking her mind… Throw in a little Townes Van Zandt mixed with Joan Jett and you’ve got a listener who’s going to grab a lot of people’s attention who are disillusioned with country’s offerings as of late.” Currently set to release her sophomore album “Driving In The Dark” (produced by Leeroy Stagger) in May of 2018, Mariel Buckley’s skills as a singer-songwriter and performer continue to impress new listeners while her long-time supporters look on with an assured understanding that they knew the depth of her talents from the beginning.

Follow Diga’s footsteps through the deepest snow, into the natural world, and reemerge on the other side with a new understanding of contemporary Canadian music. From Yellowknife, Northwest Territories to Aarhus, Denmark, Diga traveled the circumpolar world to bring his music to new heights. World music, soft instrumentals, and his Cohen-esque voice, work together to infuse Yellowstone with the sounds of the circumpolar world. The lyrics embrace Diga’s poetic sensibilities, describing an unknown world in the midst of modernity. Set for release in 2018, this new album challenges us to re-imagine the musical landscape around us.

A Wolf Willow show includes ripping fast swing numbers, hardcore honky tonk and heartbreaking torch songs (all with a horn section). From barn dances to major festivals, Wolf Willow is bringing back the lost side of country music -it’the feeling that counts! After releasing their full length record in April 2017 Wolf Willow of was asked by 291 Films to compose the music for a documentary on caribou. The resulting album equal parts Ennio Morricone and Ernest Tubb features 12 instrumental tracks and four singles including live show favourites “Forget You Time ” and “Your Glad-handing (Left Me all Alone)