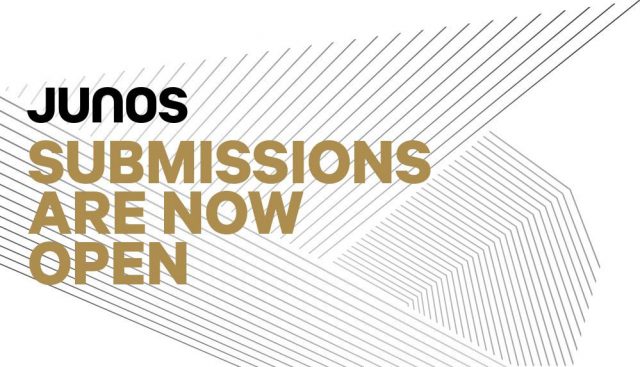 TORONTO — The Canadian Academy of Recording Arts and Sciences (CARAS) announced today it is accepting submissions for the 2019 JUNO Awards. Submissions are open from Monday, October 1, 2018 to Friday, November 9, 2018 at www.junosubmissions.ca

In order to be considered for nomination for the 2019 JUNO Awards, national music release dates must fall between the eligibility period of September 1, 2017 and November 9, 2018.

Submission eligibility:
Eligible music must be available for all Canadians and for national sale* or via a recognized national music streaming provider.**

*Product must be released nationally via brick and mortar stores or third-party online retailers.

**Product must be released via a nationally accessible streaming service that has paid subscriptions, full catalogue, or on-demand streaming.

Eligible musicians must be Canadian citizens. This is defined by CARAS as 50 percent or more of group members holding Canadian birth certificates, passports or are Canadian Permanent Resident(s) with residency in Canada during the last six months of the eligibility period.

CARAS has also introduced the following changes this year:
Streaming Only Releases

Rap Recording of the Year

Jack Richardson Producer of the Year

Artist and Group of the Year

CARAS relies on Academy Delegates to help nominate and vote on JUNO Award  winners each year. Sign up to become a CARAS Academy Delegate and receive 40 percent off submissions.   Visit www.junoawards.ca/join.

PwC is the Official Ballot Accountants for the 2019 JUNO Awards.