Home GO! - Music General Getting Down to the Nitty Gritty 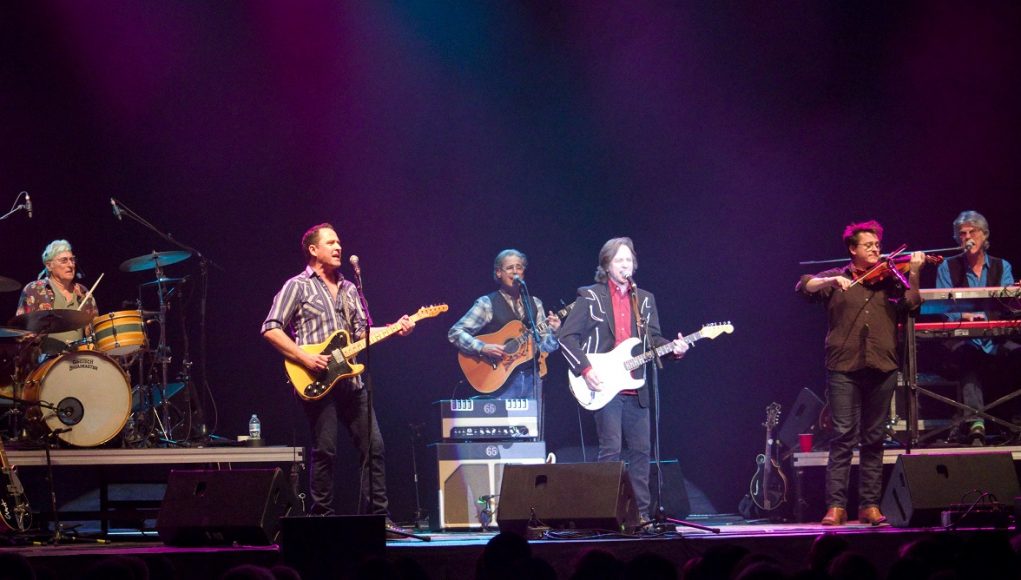 Getting Down to the Nitty Gritty

The legendary Nitty Gritty Dirt Band kicked off their Thursday night concert at Penticton’s South Okanagan Event Centre with a cover of Dylan’s “You Ain’t Goin Nowhere.” The Nitty Gritty Dirt Band version is considered the best by many despite stiff competition from the Byrd’s and the songwriter himself. It was a gentle start to an evening filled with nostalgia, evocative moments, and weighty country rock numbers.

Of course, it should be of no surprise that this band knows how to open a show. After all this is what experience looks like. Recently they completed their 50th Anniversary Tour. The heart of the famed band, Jeff Hanna, Jimmie Fadden, and Bob Carpenter have been touring fifty-two years together. But don’t worry, these guys are anything but worn out. They have the energy and enthusiasm of musicians half their age. There’s no doubt about it, they love performing to a live audience.

The band’s original members were joined on stage by Jaime Hanna, Jim Photoglo, and Ross Holmes. Jaime Hanna—Jeff’s son—sang a beautifully nuanced version of “The Lowlands” that was impeccably melancholy. Father and son shared affectionate moments throughout the concert. Ross Holmes, the band’s fiddler stole the show on more than one occasion. The talented Nashville-based musician was a force to be reckoned with —as comfortable with honkytonk numbers as with the folksy ballads.

When vocalist Jeff Hanna introduced their 1966 single “Buy For Me The Rain” he joked they had to relearn it from the record for the tour. The piece was gorgeous reminder of the time period which sparked the band’s beginnings. It was wistful without being overly sentimental or dated.

The night was filled with clever musical selections beautifully linked together, each song building on the last. They mixed up genres, tempos, styles. There was something for everyone: country, rock, bluegrass, Cajun, and folk. There were lots of numbers from the eighties: “Long Hard Road”, “Dance Little Jean”, and the popular “Workin Man (Nowhere to Go).”

Throughout the night the crowd danced in the aisle and couples two-stepped in front of the stage. Despite the fact the concert was in an auditorium, the center seemed to have the intimacy of a smaller venue. This was partly due to Jeff Hanna’s ease with the audience and his friendly chatter between songs, and partly the kind of music the Nitty Gritty Dirt Band plays. It’s homey. Music that makes one long for kinder times.

A standout selection is hard to pick. There were so many solid pieces. The audience loved “Mr. Bojangles” joining in with the singing. After that there was a parade of crowd pleasers: “Ripplin Waters”, “Bayou Jubilee”, and “Bless The Broken Road.” The crowd rushed the stage when the band began playing “Fishing in the Dark.” This song seem to energize the band. After that the atmosphere which was already charged seemed to go up a notch. The band finished with fabulously raucous “Cadillac Ranch”. A superb version that got even the most staid audience members moving.

As soon as the band left the stage the audience began clapping and begging for more. The audience didn’t have to wait long for their return. Jeff Hanna invited the all-female Alberta-based opening act Nice Horses to join them on stage for the encore. One can’t help but imagine they must have been thrilled to be singing with the iconic musicians. Together they sang the classics: “Will the Circle be Unbroken” and “The Weight”. Afterwards the musicians all bowed together with their arms around each other’s shoulders. A benevolent gesture that marked a
seamless and exceptional evening.