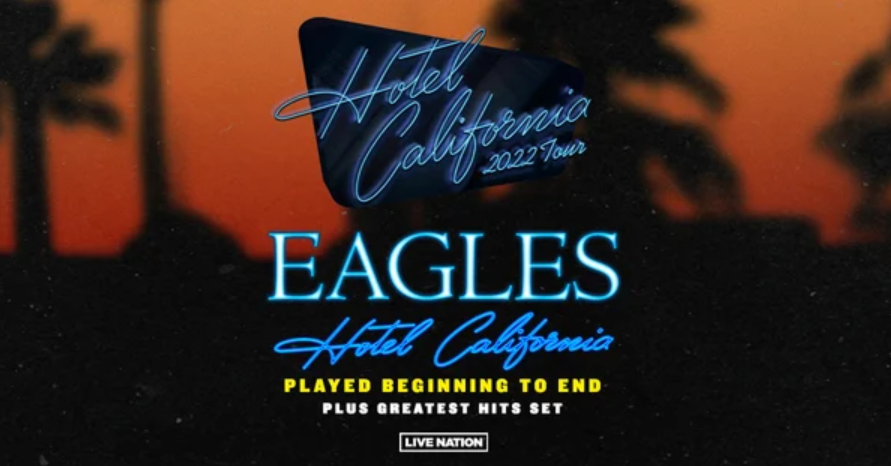 The EAGLES – Don Henley, Joe Walsh and Timothy B. Schmit, with Vince Gill –have extended the “Hotel California” 2022 Tour with concerts being added in Canada beginning Friday, September 9th in Toronto, Ontario. Tickets for the Canadian tour, produced by Live Nation, go on sale Friday, July 15 at 10 AM local time through Ticketmaster.
Each concert will feature ‘Hotel California,’ performed live in its entirety from start to finish, accompanied by an orchestra and choir.  After a short intermission the band will perform a full set of their greatest hits. All shows will begin at 8 PM.
A variety of presales are available starting Thursday, July 14th at 10:00 am local time in each market. A limited number of VIP packages, including premium seats, exclusive merchandise, parking & more, will be available beginning Friday, July 15th.  Check Eagles.com for complete tour and ticket information.
The Eagles kicked off the “Hotel California” concerts in 2019 in Las Vegas to rave reviews and critical acclaim. To date, the Eagles have performed more than 60 sold-out shows, including five nights at the famed Madison Square Garden in New York City, four nights at the MGM Grand Garden Arena in Las Vegas, Nevada, four nights at American Airlines Arena in Dallas, Texas, three concerts at the Toyota Center in Houston, Texas, three nights at the Forum in Los Angeles, and multiple nights in Austin, TX, Denver, CO, Nashville, TN, San Francisco, CA, Phoenix, AZ, Seattle,WA, and St. Paul, MN.
“From the title track — a 6 1/2-minute flamenco-reggae ballad— to the elegiac closer ‘The Last Resort,’ it’s consummately performed…”
-Los Angeles Times
“The band performed the album from front to back, following with a blazing greatest hits set that had the audience at the sold-out arena constantly on its feet…With no exception, the songs have aged well, but how could they fail with the Eagles’ five-part harmony and five guitar-approach… (Henley’s) voice sounded as strong and pliant as it ever has, easily hitting the highest of notes, while retaining his trademark huskiness.”
-Billboard
“By now the orchestra has been joined by a choir. The Eagles’ sound, with its glowing harmonies, barely needs them, but they add to the sense of occasion – and the delight of the crowd. I’ve never seen so many songs receive a standing ovation.”
-Daily Mail
“…the Eagles spent more than 2 hours and 40 minutes on stage performing most of the best-known songs in their oeuvre, their voices sounding as robust as they did half their lifetimes ago. And the show was all the best adjectives you can think of — exhilarating, breathtaking, stunning, magical, triumphant.”
-Charlotte Observer
“It was a soulful, technically brilliant concert, with state-of-the-art sound engineering, wonderful performances and beautiful visuals presented on a giant screen behind the musicians.”
-Buffalo News
And it was…sublime. Eagles have long had a knack for precise, recording-perfect performances, and playing “Hotel California” was perhaps the finest exposition of that. The sound mix was pristine, the vocal harmonies were rich…”
–Oakland Press
“Everyone in the arena seemed to leap to their feet and start applauding at once. For a split-second I actually felt my eyes start to mist up. It was just so overwhelming, the power of (Henley’s) voice, the beauty of the song, the majestic-ness of the symphony, the thickness of the nostalgia hanging in the air.”
-Charlotte Observer
“What made the “Hotel California” portion of Thursday’s set so stunning was just how airtight the Eagles sounded… The “Hotel California” portion of the set was near perfection – a tight, 50-minute showcase of musicality that would have been worth the price of admission alone. But the night was far from over.”
-Cleveland Plain Dealer
Hotel California is the third best-selling U.S. album in history, certified 26-times Platinum by the RIAA. After its release in 1976, it topped the charts and won two GRAMMY Awards for “New Kid in Town” and “Hotel California.”  Several of the songs from the album have never been performed since the original “Hotel California” tour.  The band’s Their Greatest Hits 1971-1977 is the best-selling U.S. album in history, with the RIAA certifying the collection at 38-times Platinum.
In today’s faddish, fractured, rock landscape, the Eagles retain an appeal that transcends both generation and genre, cementing the band’s role as enduring musical icons. As the best-selling American band of the ’70s, and one of the top-selling acts of all time, the Eagles have sold more than 150 million albums worldwide, scored six #1 albums and topped the singles charts five times. They have won six GRAMMY® Awards, were inducted into the Rock & Roll Hall of Fame in 1998, in their first year of eligibility, and received the Kennedy Center Honors in 2016.