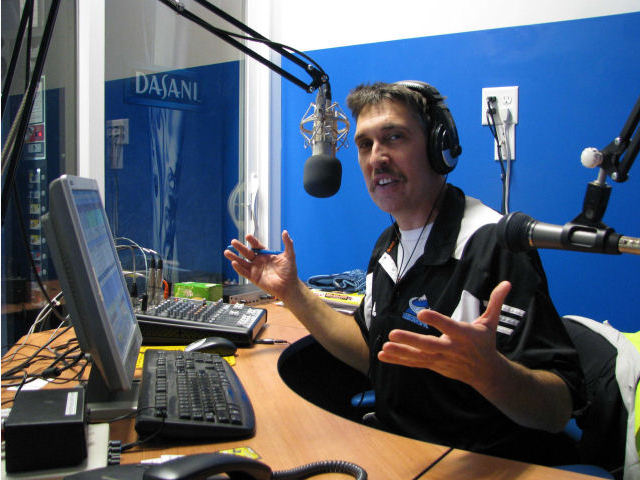 So Country with Dennis Walker

In less than two years, South Okanagan Country Internet Radio is proving to be a serious competitor in the Okanagan radio market. The 22-year employee of CIGV Giant FM Penticton, who was let go with the rest of the air staff in a corporate buyout, is moving forward very quickly.

Less than five weeks after loosing his job, Dennis Walker was up and running with socountry.ca Internet radio, broadcasting out of his kitchen. Penticton city councilors and community leaders kept the momentum building by doing interviews on Dennis’s front porch and in his kitchen. Then Manuel Borba from the Penticton Pinnacles FC soccer club came to Dennis and said “We’ve got a home for you in the Adidas Sportsplex.” Broadcasting from the lobby in a glass-surrounded studio, guests enjoy the freedom to talk about what’s happening in the Okanagan Similkameen.

There’s no secret to what’s pumping out of the SoCountry studio. It’s full-out local conversation with a hard focus on local news that’s coming from the street. Walker stays away from the generic radio sound of the day and Hollywood gossip column chatter.

Since signing onto the Internet, Walker has received a Queen Diamond Jubilee Medal and recently won the Community Support Excellence Award from the Penticton and Wine Country Chamber of Commerce. In accepting his award at the Lakeside Resort event, Walker said, “When I started in radio, my boss told me don’t just talk about local events, go to them, and get involved.”

Another recent accomplishment was being a part of the Peach City Community Radio’s big broadcast. Walker is a strong supporter of the Peach City Radio effort and is working with them to produce locally radio shows.

Walker is grateful to his four co-hosts that come in to round out the sound. “All four have totally different subject matter,” explained Walker. To see the SoCountry team click here

Technical and sound support come from Harry Shaw who was the sound engineer at the former Great Valley radio where he and Dennis worked together for many years.

The SoCountry Billboard Contest is being featured by the Pattison sign group as a good way to fully utilize the advertising power of a billboard. (Click here for more info)

socountry.ca Internet radio is a refreshing change from the generic sound of corporate radio. Walker is very proud to be a true local radio station. “The Okanagan Valley’s FM country station has a head office in Halifax and the rock/ top 40 station’s head office is in Toronto,” he said.

Walker is planted firmly in the lobby in the Penticton Pinnacles FC Adidas Sportsplex. He wakes up at 3:30 each morning and hits the studio at 4:00 a.m. set to sign on at 5:30 each day. He produces his show live, then loops it the rest of the day.

And just in case you doubt Walker’s love of radio, in the over 22 years he was at CIGV radio, he never phoned in sick. Not once. He started broadcasting in 1977 when he called high school basketball and KIJHL hockey games. As for his love of sports, Walker notes that he scored two goals while playing in the 1988 NHL legends game at Penticton Memorial arena centering a line with Guy Lafluer and Brent Ashton.

Comedian Dylan Rhymer presents The Dark Side of the Room

BC Tourism and Hospitality Conference 2023 | Submit Award Nominations by Dec. 22