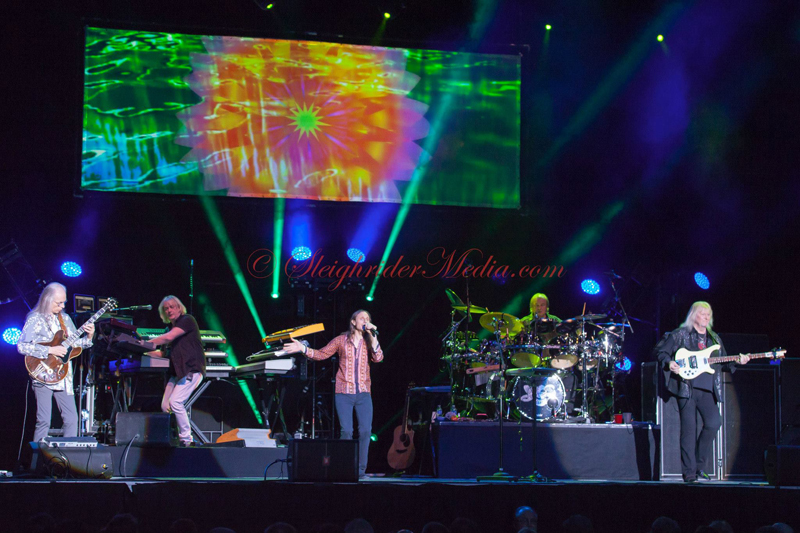 Prospera place played host to a discerning group of YES fans on March 21. The crowd in attendance was as diverse as the music they came to hear.

The original YES band has morphed many times over the years. The incarnation witnessed on Saturday night proved that the songs and their sounds were very much intact.  Sure Jon Anderson and Rick Wakeman weren’t there, but Jon Davison did an eerily fine job on covering the main vocals, while Geoff Downes created magic on the keys. The rest of the band was as original as their sound with Chris Squire on bass, Steve Howe on guitar and Alan White on drums.

YES is touted as a progressive rock band, but after revisiting their tunes, I think they should be described as a jazzy, blues, funk, psychedelic rock fusion. Although progressive is faster to say. In my heart YES will always be the Salvador Dali’s of 20th century music.

The band started with the 20 minute “Close to the Edge” followed by “And You & I,” “Siberian Khatru,” “Going For The One,” “Turn of the Century,” “Parallels,” “Wonderous Stories,” and closed off their first set with “Awaken.”

As one concertgoer put it “This is definitely music to get stoned by,” although there was a shockingly small amount of that recognizable scent floating in the air. Perhaps the die-hard fans were content to just get high on the music.

After a 20-minute break the band returned with “Yours Is No Disgrace.”  Guitarist Steve Howe performed YES’s acoustic marvel, “Clap,” while the crowd clapped along. After “Starship Trooper,” the crowd was treated to one of their favourites, “All Good People,” followed by “A Venture,” and “Perpetual Change.”  They left the stage but only for a short time as the crowd begged for one last song – the one most had come to hear.  “Roundabout” was performed with the same energy and clarity as all the songs, transporting many a concert goer back to the ‘70s when we were all much younger and less wiser.

I wasn’t sure what to expect of this concert. After all, the original members were born in the late ‘40s, making them all at an age where you’d expect voices to falter.  Not so in this case – not one bit. Of course having a young pup (43) like Jon Davison on lead vocals helped.  The harmonies created by this version of YES were disconcerting, haunting and beautiful as those created in the ‘70s when everyone was recovering from the social changes of the ‘60s.

When Chris Squire brought out his three-necked bass and Steve Howe brought out his two necked guitar I couldn’t help but smile, thinking that when you get to be that good, I guess an extra neck or two helps keep it interesting.

All in all, this was music at it’s finest.  No fancy light shows, no staged choreography, just some guys on stage doing what they love, followed by a cannon blast of shredded paper. Old-school rules!