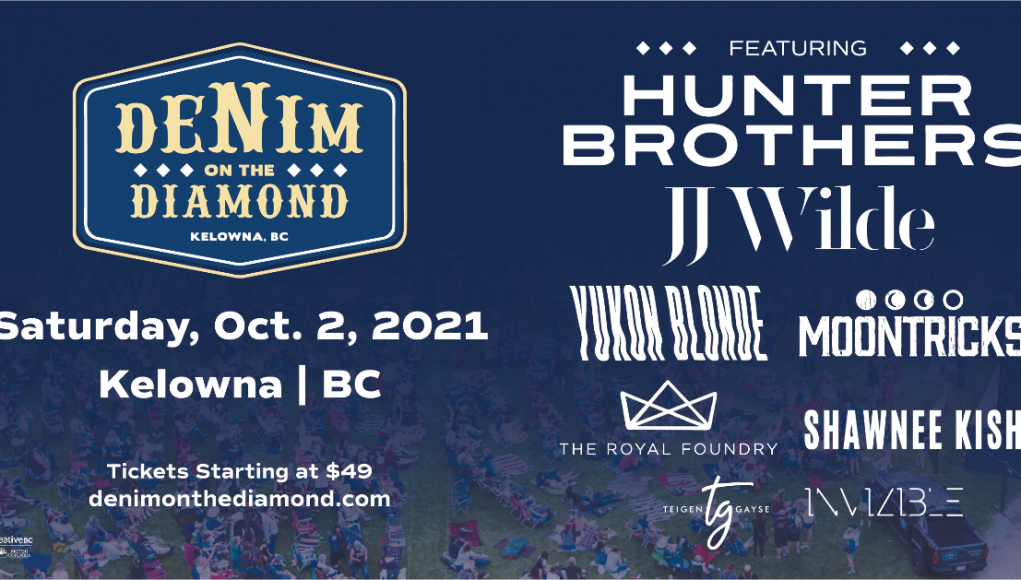 Kelowna’s biggest backyard party is back, with a music line-up you won’t wanna miss!

After a summer of uncertainty in the Okanagan, Denim on the Diamond is a go Oct. 2!
The last small batch of tickets was just released – get on them before they’re Sold Out !

Featuring Canada’s top Rock, Indie-Alternative, Folk and Country music artists on the diamond. You’ll be able to reunite with friends and have a drink downtown Kelowna under the stars with thousands of festival goers in what is guaranteed to be the biggest party of the year. Some of the Okanagan’s favourite food trucks and beverages will also be on site!

They are not messing around! The amazing line-up of musical talent ranges from Rock & Country to Indie-Alternative & Electronic.

HUNTER BROTHERS – Nominated for two 2020 JUNO Awards including Breakthrough Group of the Year and Country Album of the Year. #3 most played Group or Duo on country radio in Canada in 2020

JJ WILDE – First woman to win a Juno for Rock Album of the year (2021) in over 25 years ! First woman to ever simultaneously hit #1 on all three Rock charts in Canada for her single, “The Rush”

For more information on the line up, and to get your tickets, check out www.DenimontheDiamond.com.