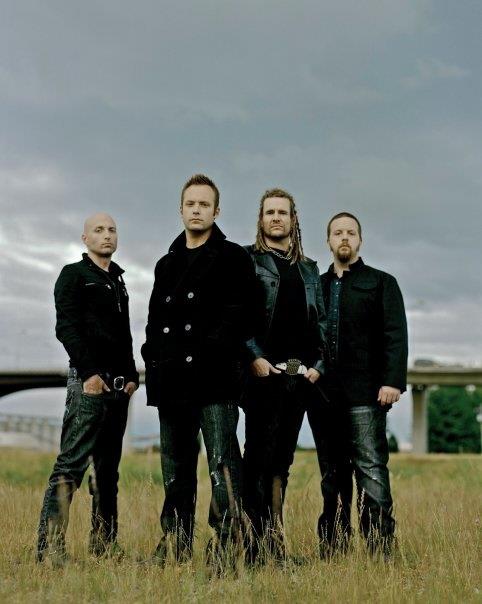 llComes and Goes, available now through AudioNest, marks the return of Default. The album is full of hook-laden choruses, thunderous drumming, powerful riffs and frontman Dallas Smithʼs most inspiring and personal lyrics yet. On Comes And Goes, Default sounds like a band with something to prove, and for good reason. “The album was originally supposed to come out in the spring of 2008” states Smith, “but our former label, TVT Records, went out of business that February.” “It was a mixed bag of emotions,” adds bassist Dave Benedict. “It almost feels like youʼre reborn again and youʼre taking your first steps, and whoʼs going to hold your hand to help you learn how to walk again?”

So Default kept busy moving forward, eventually signing a deal with AudioNest, the new label formed by heavy weight management firm Union Entertainment Group (Nickelback, Hinder, Red). “We have worked with Union for ten years now” says Smith. “We are very excited to get this record out with someone we trust.”

The band has kept busy on the road as well including tours with Three Days Grace and The Used and festivals in the US and Canada. In March of 2010, the band played to over 7,000 Canadian and international troops as part of “Team Canada”, a group of musicians, NHL Alumni, TV celebrities and Lord Stanley’s cup. “I really thought that trip brought the band together,” says Dallas. “Because weʼd been stagnate we really wanted something cool and different to happen for us. We just really got into being a band again. And I think that trip really saved us.”

Defaultʼs career got off to a decidedly more auspicious start when they were discovered by Nickelbackʼs Chad Kroeger shortly after forming in Vancouver back in 1999. Kroegerʼs interest in their demo led him to lend his support to the production of their debut album. The Fallout (2001) boasted strong singles like “Deny”, “Count On Me” and “Wasting My Time”, the latter of which was a hit at both Canadian and American radio earning the band an award for over 600,000 BDS Certified spins. A Juno for Best New Group followed in 2002, and The Fallout was certified platinum (one million copies sold) in the States in 2003.

Defaultʼs subsequent albums, 2003ʼs Elocation (nominated for a Best Rock Album Juno) and 2005ʼs One Thing Remains continued to refine the melodic rock sound of their debut, even as their approach got heavier and more aggressive. On Comes And Goes, the band once again enlisted long time producer Bob Marlette (Ozzy Osbourne, Shinedown). Smith notes: “He just took the band sonically to a good place. He’s really great to work with and it was just an easy fit.”

Recorded in Los Angeles, Comes and Goes is an album that everyone in the band feels, clichés aside, that they have topped themselves. “Right off the bat we knew this was a special album and that it came together exactly the way we wanted it to” says Smith. “We really believe in this record, and canʼt wait for our fans to hear it.”

The first single from the new effort “Turn It On”, is an up tempo anthem of lust, rebellion, and temptation marked by a catchy riff from Jeremy and an anthemic chorus voiced by Dallas. “We tried to get away from the bad relationship stuff,” Dallas says of the bandʼs direction on ʻComes and Goesʼ. “There are a couple of very positive love songs on this record. Thereʼs one about my son,” entitled “Caught In The Momentʼ”. “Itʼs a song for him. Me and his mum divorced when he was really young. Itʼs kind of a song for him to listen back to, and he can kind of see where my headspace was later on in his life.”

The second single, “Supposed To Be”, is an epic ballad destined to inspire thousands of waving cell phones and cigarette lighters during the bandʼs upcoming tours.

The members of Default are eager to take the new songs directly to the fans that have flocked to their shows and bombarded their Facebook with comments, most of them expressing anticipation for new Default music. “God bless the mall” says Dave sincerely. “We give them what they want, and therefore they reward us by showing up. Without them, weʼd be nothing.”