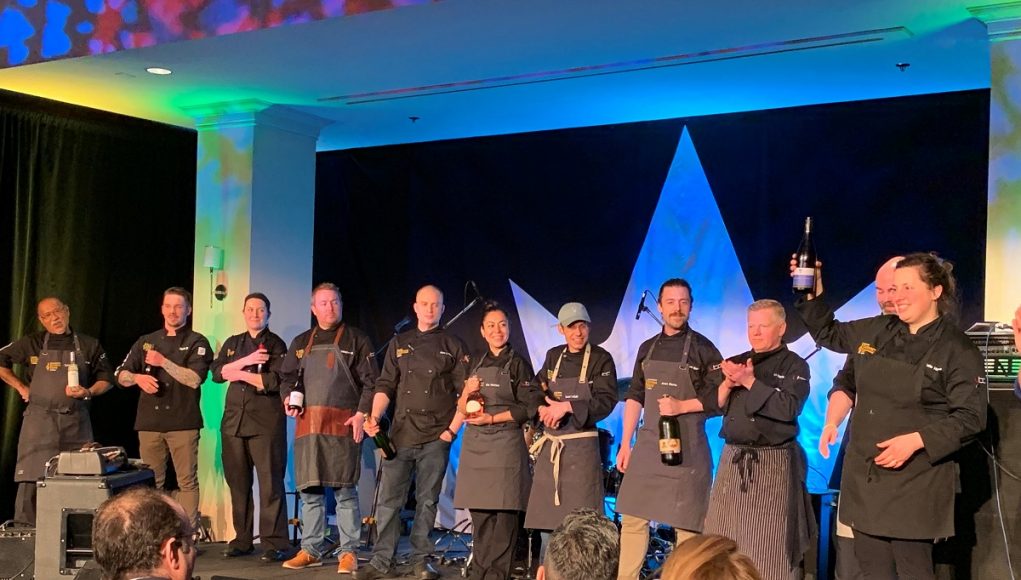 Best Chef, Best Wine Not the Only Winners #CCC2019

Faster than you can chow down an exquisite appetizer from a competing chef at the Canadian Culinary Championships (CCC), the 2019 competition in Kelowna is in the books.

Presented by Deloitte, Canada’s Great Kitchen Party is a #partywithpurpose to provide “young Canadians the opportunity to be extraordinary through sport, music and food”. Co-founders are Karen Blair, Stephen Leckie and Lisa Pasin. The CCC creators refreshed the format after a 12-year run that delivered over $15 million funding to Olympians and next generation athletes. Ingredients such as performances by Canada’s best musicians, athletes telling their stories, chefs competing regionally and signature trips to incredible destinations and a national finale for chefs, wineries and breweries remain. Organizers promise “more chef time, less speeches, more music, elite athletes from the world of amateur, para and pro-sport and a fantastic new show”.

Perhaps the greatest winners are students from the Okanagan College Culinary programs and junior chefs from the Okanagan Chefs Association who are mature enough to recognize the phenomenal opportunity presented to them. Here, there’s the chance to work alongside Canada’s most gifted chefs, gleaning from a wealth of kitchen know-how. Students and juniors dedicated enough can accelerate their careers and find themselves employed in award-winning kitchens.

Attendees win as they taste outstanding cuisine, wine, beer and other beverages. Lady luck may reward raffle ticket buyers and auction bidders. The trips and auction items assembled each year are fabulous.

Kelowna, too, is a winner as culinary enthusiasts from across Canada and beyond gaze upon the region. Onlookers learn about the community’s inspirational food and beverage scene – in town, at wineries and breweries, and on the ski slopes and golf courses.

While all the chefs competing in the CCC already demonstrated extreme talent in regional competitions, it all comes down to this intense weekend and three challenges:

Mystery Wine Pairing – Chefs have to guess the grape varietal, decide what food will pair with that wine and with a maximum budget of $500, create appetizers for 500 attendees to judge.

Black Box Competition – Chefs are presented a black box of ingredients and are timed to prepare dishes for the judges. Chefs must spring to action after being held without outside communication in a guarded room. Perhaps the most stressful part is the random selection process in which they have no idea in which order they’ll be summoned.

As chefs compete, ticket holders split time in demonstration kitchen seating, in the main hall where breakfast or brunch is provided by culinary students with Tea for a Cause and artisan coffee by Bean Scene. They can also browse an on-site Market of local artisan goods.

Beverage sponsor, Okanagan Spirits served a cocktail choice of Gin with Elderberry Tonic or Rose Lemonade. Cannery Brewing of Penticton demonstrated the lengths sponsors go to satisfy when the delivery of its craft beer took a long route around a slide that blocked Highway 97.

National Culinary Advisor and Head Judge James Chatto reported the 11 regional champions were strong contenders and any one of them could’ve owned the podium. “Nobody raced ahead of the pack (as has happened in other years) and nobody stumbled badly. In terms of marks, all 11 chefs stayed in a tight pack and though the people at the front of the group changed with every phase of the competition, it was impossible to guess who would break the tape when all three contests were done. Chefs who excelled in the Mystery Wine Challenge did not do quite so well in the Black Box. Chef Takashi Ito (British Columbia), for example, won the Grand Finale by a large margin, but did not fare well in the Black Box. Chef Dave Bohati (Calgary) aced the Black Box while Chef Christopher Hill (Saskatoon) won the Mystery Wine Challenge.”

National Wine Advisor David Lawrason explains Canadian wines that took Best of Show in respective cities as judged by panels of local sommeliers, retailers, and wine writers often including him compete at CCC to be named the Wine of Year.

It’s impossible to name each winery, brewery and other beverage outlet or all of the culinary partners who provided tasty bites throughout the weekend. For further details, search #CCC2019 on Twitter and Instagram and visit http://greatkitchenparty.com/ca/media/latest-news/

Kelowna’s contract includes another year as host for CCC so if you missed the festivities this year, watch for the 2020 announcements.

Featured photo: At Grand Finale, competing chefs convene on stage to describe their appetizer and wine pairing and await the announcement of medals.  By Roslyne Buchanan