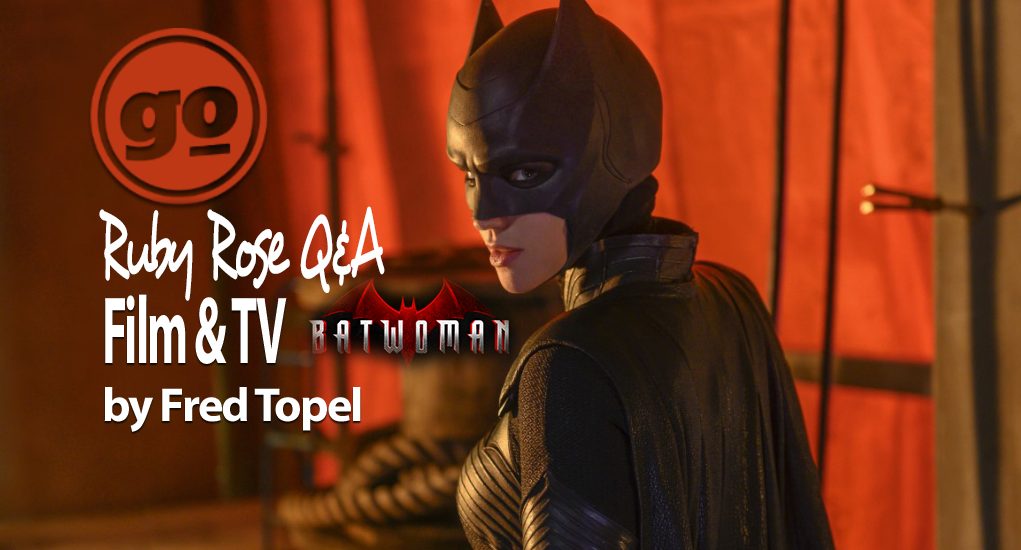 Ruby Rose made a striking debut as Batwoman in last year’s CW crossover “Crisis on Earth X.” Now she gets her very own show on The CW, and Batwoman will cross over with the other CW heroes again later this year. Kate Kane (Rose) is Bruce Wayne’s cousin. When she discovers the Batcave, she decides to pick up the mantle. Only she won’t be Batman. She’ll be Batwoman.

Ruby Rose: Mm-hmm, absolutely. And also my life of boxing and exercising and training, fitness. I’m glad I have that background or I don’t know how I would have accomplished what I’ve accomplished on this show.

G: But learning to do it on camera?

RR: Yeah, it’s kind of the same. It’s just you don’t hit the person, you know. That was a little bit interesting to learn because you’re like, ‘Well, that’s not the right technique.’ An then it’s like, ‘Yes, because then you’ll hit someone.’ I’m like, ‘Copy that. All right, wider hooks.’ It was an easy adjustment.

Q: What kind of stories can we expect on Batwoman?

Q: How much input have you had?

RR: Actually, [showrunner] Caroline [Dries], [executive producer] Sarah [Schechter], directors especially, now that we’ve done a couple of episodes, they kind of come to me to say, “This is an idea that I have reading the script but what would you do? What would Kate do in this situation?” I think there does come a time when you’re four, five, six, seven episodes in that you really know your character and sometimes you just see something on paper or you see something in costume and you just kind of get protective. So you’re like, “She wouldn’t say that.” You’re like, “Can I try it this way and then we’ll try it your way?”

Q: How many fittings did it take to get the costume perfect?

RR: I think up until a couple of weeks ago, we were still making tweaks. You have to make little tweaks depending on fighting, jumping, wirework, when it’s cold, when it’s hot. Just these little things, and then you fix one thing and then something else is wrong. And you fix something else and you’re like what’s this then? So it’s been a long process to get it as comfortable as possible.

Q: Are you in love with it now?

Q: How many episodes do you wear the wig in?

RR: I’m not allowed to say. You’ll find out.

G: Is Alice her Joker, that lifelong rival?

RR: Look, Alice is someone that due to her upbringing, she has kind of adopted this Alice in Wonderland personality. And that’s as per the comic. It’s not so much the Joker as she thinks she’s Alice from Alice in Wonderland. So that comes out a lot in it. I guess if you’re going to reference it as far as what would be the closest comparison, I guess the unpredictability of it and the riddles and the kind of oh, there’s someone in there, oh no there isn’t. Yeah, there’s a human, no there isn’t. That is very Joker-like but I think she’s just crazy to begin with. I’m also sort of intrigued by her. She seems to know things that I don’t know. She’s sort of been around. I’m kind of intrigued and want to know more but I’m also terrified because she’s so unpredictable. So any confrontation I have with Alice kind of leaves me having more questions than answers. It draws me to try to find like who is this person? What is this person doing? Why are they so angry? And what do they want to achieve? Again, every time I come up with what I think is an answer, it’s another one of her riddles.

Q: What does it mean to you to be a hero to the audience?

RR: Yeah, it means everything. That was part of the reason why I went to Caroline and Sarah. They were wondering, “Would you want to go from film to a TV show that could potentially be years, it could be 10 months? It could be moving from L.A. to Vancouver. It’s not like three months or a month or six months.” I was like I don’t know. When we talked about it and how passionate they were. They were yelling over the top of each other and finishing each other’s sentences. “No, that’s not what happens. Then this happens, but then this happens.” “No, no, you’re telling it wrong, Caroline. Let me tell it.” I was watching this ping pong match if they’re that invested in this and it makes them so happy.

Q: Is there a Batmobile?