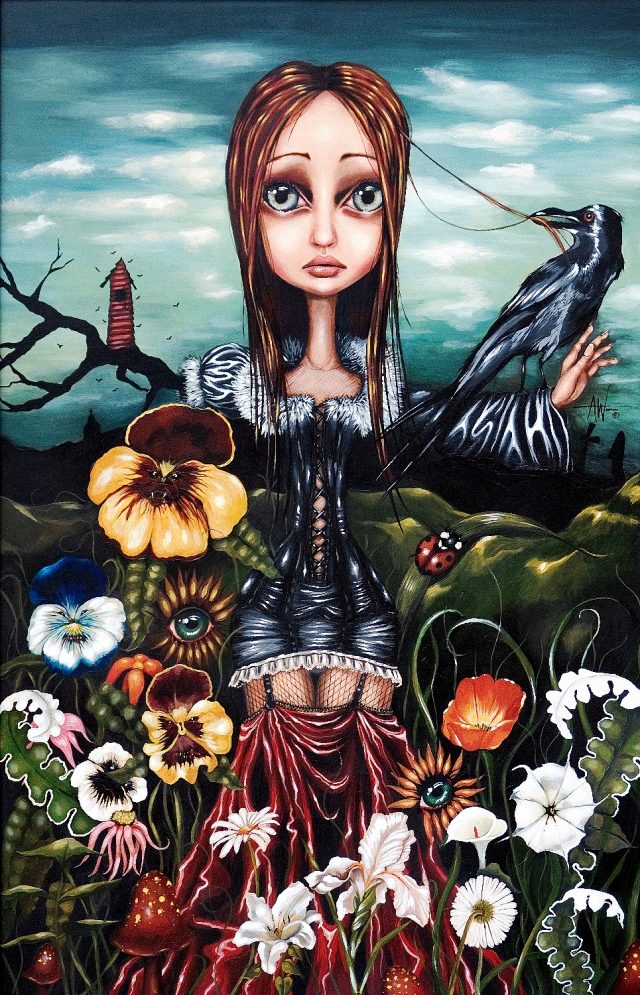 Canadian painter, Angelina Wrona, is  synonymous with the mainstream emergence of pop-surrealism in Canada…

Since breaking onto the scene in 2006, her paintings have poured into gallery showrooms across the country, where they have quietly and infectiously enchanted passers by. Her painting style and technique possess an indefinable affectation that compels people, draws them in, leaving most with more questions than answers. Yet, her work is in demand world-wide.

Each painting tells a story, has a finely tuned effervescent quality, like looking into Galadriel’s pool, the story is unique and personal to the observer, and threatens to conjure images from ones past. For those who prefer to stick to the top layers of meaning, as art, her work is characterized by it’s distinct lack of definable tradition, yet falls heroically within the realm of pop-surrealist art. Popularized by artists like Ed Roth, Mark Ryden, and Robert Williams – founder of the arts and culture magazine, Juxtapoz,  pop-surrealism has a tendency to defy the very thing that art  critics and scholars strive to do: to define form, to apply rules of execution; it is , in part, that very thing – a lack of definition – which seems to characterize the art form itself.

pop-surrealism is a form of  organic document that speaks to cultural perspectives; is  representative of how we see and interpret the world, and our collective psychological  condition.

With a dedicated following in California & the opening  of Kirsten Anderson’s Roq La Rue Gallery, in  Seattle,  Washington, the pop-surrealist movement  started gaining ground in the late 1990’s.  Associations were made with modern forms like conceptual, or traditional, and also marginalized disciplines like Dadaism,  Abstract, and Impressionism. Treading deeper into the historical record, a thread of influence can even be made looking to 14th  century artist, Hieronymus Bosch, who stepped away from  medieval tradition using elaborate, surreal imagery to illustrate religious and moral themes. Anderson agrees that, in fact, there are parameters that do somewhat define pop-surrealism: it’s technically masterful, it’s contemporary and iconographic, it’s archetypal; it comes from the subconscious realm, and there is a  reason behind the painting.

Of her own work, Angelina says she has seen it evolve over the last three years, after breaking onto the market. “My technique has become more refined, much of it from being comfortable with my own style and interpretation

to begin with. It’s interesting to see how the process unfolds. When I start to sketch a new idea and revise the early  painting to include different  elements, the depth starts to  show  through, and the  expressions and ideas in the  background come alive. It’s really about the detail.”

A registered nurse specializing in geriatric Alzheimer’ before she became a recognized artist, Angelina says there was, fortunately, never a starving artist phase. “I never did completely pull the pin on my day job to try to build a career as a painter. I worked part-time as a nurse during the evening, and it didn’t interfere with my painting.”

As for some, Angelina’s success didn’t come in a striking epiphany. She had been selling work slowly overtime. She says she realized then that she would have some measure of success. But it was during a showing at a local gallery, when a collector from Australia purchased four of her early works, that she began to realize her gift. “When I first started I was painting for me.

A few people who had seen my work commented on it and enjoyed it. A local restaurant owner wanted me to sell some paintings in her restaurant. She had several local artists hanging and never took any commission. I was actually quite nervous about it. It’s a big step the first time any artist offers their creations up for criticism. The biggest struggle is to get that confidence and keep it,” Wrona reflects. “Once, at a signing I was doing, an older woman came in and cast a very dour eye on my work. I asked her if she liked what she saw and she, not knowing I was the artist, informed me that she would only give a painting like that to someone she hated… I informed her that I was the artist and she nearly died of embarrassment. It was a good feeling to not allow the criticism to affect me in a negative way.” “My first real show was at Thinkspace Gallery, in Los Angeles. I was invited to a large group presentation, curated by one of the owners, Andrew Hosner,” says Angelina. “It was a ‘salon style’ hanging, with pieces by various artists. My husband and I found out only after we’d made the trip that the hotel we booked was a complete dive. After relocating to another hotel, we finally arrived at the gallery to discover all my work had sold.” Wrona says that, among the paintings sold, was a large canvas titled, Clarice, a painting called, Water Lily, and another called “Picture Day.” The last of these paintings, Picture Day, was the only one Angelina had done of a boy at the time of original publication.

Each painting tells a story, has a finely tuned effervescent quality, likelooking into Galadriel’s pool, the story is unique and personal to the  observer, and threatens to conjure images from ones past.

Considering pieces like Never Look Back, Madame Nature, and Psst, her imagery, irrefutably, does more than just hang on  a wall. Something about traditional painting of the 18th and 19th  centuries – and even before that generally held true, was that it was seen not only as decorative, but was a means to record history, for posterity. Many modern art forms, pop-surrealism included, seems more a form of organic document that speaks to cultural perspectives; is representative of how we see and interpret the world, and our collective psychological condition.

“I’m a big believer that art will grab people, regardless of cultural  mores,” says Angelina. “Psst… was an idea relating to the amount of damage and hurt that could be caused by gossip and jealousy. Alternately, I thought it would be interesting to take ‘Mother Nature’, and make her into Madame Nature. Bunny Couture was originally going to have a Victorian hat, but the rabbit was a fun substitution… I have definitely been having fun with rabbits  lately,” Wrona smiles.

There continues to be a strong demand for Angelina’s original work, with requests for custom orders coming in on a weekly basis. “There is a very strong demand. I currently have only one original for sale, ‘Resurrection’. There are some ideas I would consider doing, but when you are working with someone else’s notion you lose creative control of your work; if you don’t feel  the connection with your work, it will suffer.”

On Angelina’s behalf, Gonzo Magazine would like to send a shout out to the The Children’s Hospital of Eastern Ontario, the amazing staff, and  the way they value and care for their patients.