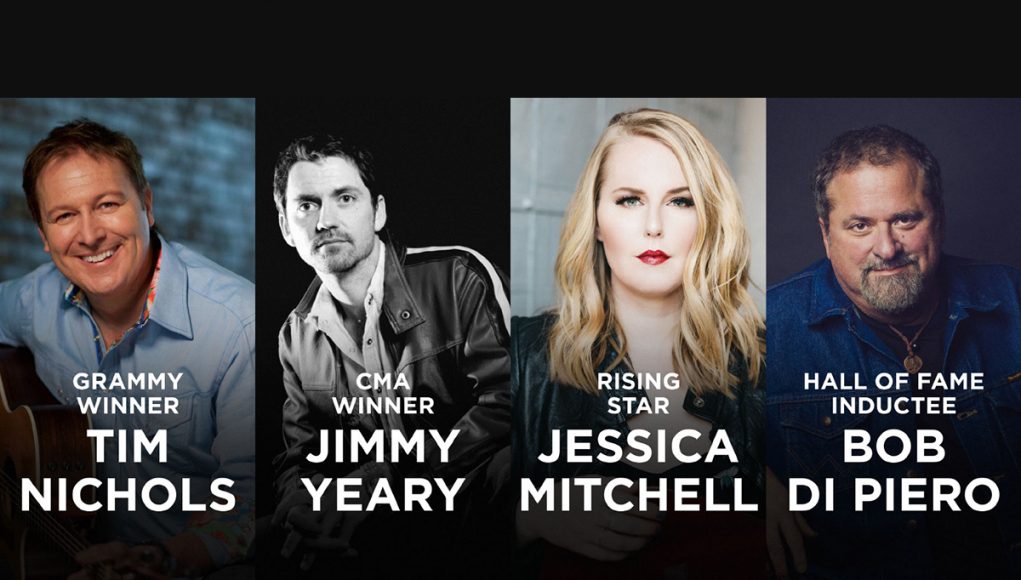 Songwriters and music lovers get ready!

The 1st Annual 97 South Song Sessions is coming to the Okanagan this August 1st and 2nd. Hosted by Paul McGuire from Entertainment Tonight Canada and CMT, the show will take place at Bench 1775 Winery and Penticton Lakeside Resort and Conference Centre in the heart of Okanagan wine country.

The two-night event will feature performances from songwriter, Grammy Award winner, and Nashville Songwriters Hall of Fame Inductee Tim Nichols. Nichols was inducted into the 2017 class of the Nashville Songwriters Hall of Fame and has been writing hit songs for over two decades. Country music fans may recognize some of his number one hits from artists like Alan Jackson, Reba McEntire, Tim McGraw and many others.

Hear these songwriters perform their hit songs acoustically, in-the-round, while they relay just how their songs came to be in anecdotes about their lives in music.

To warm up for this event I had a chance to get together with Tim Nichols for a Gonzo Q&A interview.

TC: When did you first decide you wanted to become a songwriter?

TN: I moved to Nashville with the goal of being a country artist. When I got here, I discovered how much the music industry valued and respected the craft of song writing. I started going to the Bluebird Café. At the Bluebird, the shows are “in the round”. The writers are in the center of the room, and the audience surrounds them. It always seems the writers in the circle were having such a great time. I decided I wanted to figure out how to get in that circle! It soon became apparent to me that I was supposed to be a songwriter.

TC: Did writing always come natural to you?

TN: To a large degree, yes. In school I liked English and Literature more than Math and Science. Some days writing is so easy, and other days it’s so difficult! But it always felt comfortable and natural.

TC: How did you learn the ins and outs of the business of songwriting?

TN: Anytime you are fortunate enough to pursue that you’re passionate about, your drive and desire to learn and improve, motivates you to find answers to your questions. In my case, when I started trying to get a publishing deal, I met with a writer representative at BMI (Broadcast Music Inc.). BMI is a performing rights organization that collects radio performance royalties from radio stations and distributes them to songwriters and publishers. In addition to that service, another of their main objectives is working with new writers, explaining and educating on how the business of songwriting works.

TC: What can people learn about the process of songwriting at the 97 South Song Sessions performance event?

TN: I think one of the things people will learn, and be surprised by, is that many of their favourite country songs were not written by the artist who sings them. They were written by Bob DiPiero, Jimmy Yeary and myself. They will also get a glimpse of the many different places song ideas come from. For many people this will be an entertainment experience, like they have never experienced before! It’s funny, emotional, intimate and honest. It’s a little peak behind the music business curtain.

TC: You have written songs for some outstanding musicians. How does a songwriter get heard by these types of artists? Any tricks to trade?

TN: The one sure fire way to get your song heard and recorded by the biggest stars in the music business is to write undeniably great songs. It’s that simple. Easy to say. Not easy to do. Writing songs for that matter…doing any kind of great work is difficult and demanding. It requires time and sacrifice. I have written so many bad songs…but that was and is part of the learning process. There are no tricks, no secret handshakes. But if you write great songs, the doors on Music Row are wide open.

TC: You co-wrote “Live Like You Were Dying”, which was recorded by Tim McGraw and won multiple awards. Was it written for McGraw? Wasn’t his father going through an illness at the time? How did it happen that he was the one that got to record this song?

TN: “Live Like You Were Dying” was not written specifically for Tim McGraw. It just so happened that his father was fighting a terminal illness at the time, and I believe the emotions that Tim was experiencing at the time translated to his amazing vocal performance on the record. I would say there is a large majority of the public that believes that Tim wrote “Live Like You Were Dying” himself. Actually, a couple of years ago, my wife was at a luncheon and “Live Like You Were Dying” came up in conversation. She said, “my husband wrote that song” and was immediately “corrected” by a woman who said, “no he didn’t, Tim McGraw wrote that song about his dad!”. We played it for Tim first because we knew he was beginning to look for songs for the new album.

TC: How has writing country music changed over the years?

TN: Technology has had a huge impact on the profession of songwriting. First there was illegal downloading, which was followed by horrifically low rates for streaming of our music. Both of these events had a tremendously negative impact effect on the number of songwriters who were able to make a living in Nashville. Some estimates say that there are as many as 75% fewer professional songwriters in Nashville now, compared to the 90s and early 2000s. But I’m happy to say with the passage of the Music Modernization Act last year, things are looking up!

TC: What inspires you?

TN: I have found inspiration in books, movies, music, conversations etc. Experiences can sometimes provide inspiration. Most days when I arrive at my office in Music Row, I’m not inspired. But writing songs is my job, so I show up every day to do my job – inspiration or not. I have discovered that songwriting is kinda like taking home a door prize, you must be present to win! And when I show up, that’s when inspiration tends to show up.

TC: What is more important when writing a song, the melody or the lyrics? which comes first?

TN: Over the years, especially in country music, they lyrics have typically been the star of the show. More recently melody is definitely playing a bigger role.

TC: Where do your songwriting ideas come from?

TN: Come to 97 South Song Sessions and you’ll hear all about it!

The first show at Bench 1775 is now sold out, but there are still tickets available for August 2nd at Penticton Lakeside Resort and Conference Centre at https://97southsongsessions.com/