The latest musical from Penticton’s Soundstage Productions combines a very serious subject – a world where water becomes a very precious and scare commodity – with a large cast, live orchestra and a great deal of humour.

Lynne Ledier, the artistic director and founder of Soundstage Productions, and the large cast of more than 30 has been working hard over the past several months in preparation of hitting the stage with the Tony Award-winning version of Urinetown, the acclaimed musical that took Broadway by storm at the turn of the 21st century.

The script and music for Urinetown was written by renowned musical theatre veteran Mark Hollmann, while the adapted book was written by Greg Kotis. Urinetown made its debut on Broadway in the fall of 2001 and won the Tony Award for Best Musical that year.

Ledier, who is also a well-respected, veteran vocal coach when she’s not running Soundstage Productions, said several of her students have sang songs from Urinetown over the years, which piqued her interest in bringing this particular production to the stage in Penticton.

“My students have been singing songs from this show for several years and I’ve always been intrigued by the title when it first came out … I was wondering what is this show all about,” she said. “Because of the title itself, it intrigued me. Some people react to the title, which draws you to the subjects the originators wanted to talk about and express.”

Urinetown is a place “that exists on all the levels”, including a state of mind, a philosophy. “It’s not an actual physical place, but a metaphorical place. It is used as a concept, a weapon of fear. It is used in many ways, depending on who is referring to it.”

At its very base, Urinetown, the musical production, is about having a good laugh while dealing with some pretty serious issues, she said.

“It’s a parody, a comedy,” she said. “It’s basically about a not-so-distant place in the future where a dystopian society exists where there is a huge water shortage due to a 20-year drought, which has led to the government banning public toilets. To control this, a company called the Urine Good Company (the UGC) places these fees for people to use their urinals. But they are greedy and keep raising their fees and people can’t afford to use them, so they rise up against the corporation and engage in the classic revolt against oppression.”

The production, near the end of the show, also deals with issues raised by renowned British 18th Century philosopher Thomas Robert Malthus, who predicted the world’s rapid population growth would lead to important issues like severe water shortages and difficulty in universal sustainability, said Ledier.

“Malthus talked about population unchecked would cause gross misuse of resources that could not be sustained,” she said. “These are all serious issues in current day times, but this play treats those serious themes using music and humour and it’s parodied. Even the forum of musical theatre is parodied as a source of communication itself.”

As the leader in charge of the production from start to finish, Ledier said she loves when the cast members get the adrenaline rush in performing on stage in front of loud and supportive audiences, but gains the most satisfaction in the process of putting a large-scale show of this magnitude together from conception to opening night.

“I love the creative process,” said Ledier, who has been involved in musical theatre her entire adult life. “I love putting a show together, I love sharing ideas of trying to put a large show like this together. There’s nothing quite like that moment when you see it all come together with all these people with all this talent. It takes a lot of people with a lot of different skill sets to bring this all about. That’s what I love.”

Each new show brings new challenges, which is stressful, but part of the fun. “For me, I have to figure out what I’m going to have to do and put it all together using the resources we have here in this community. Then we have to plan rehearsals, select a cast, realizing we only rehearse once a week and basically have 14 practices before we see an audience on opening night.

“This production has extra challenges as we have a live orchestra, full costuming, completely transforming the whole venue … it’s all pretty exciting.”

Because Soundstage concentrates on bringing one quality show to Penticton and area audiences once a year, the goal each and every time is to produce an outstanding musical theatre experience, said Ledier.

“We want to make our annual show something special,” she said. “We’re not like other theatre groups where they have a revolving door of show after show after show all year round. We like to think of our productions as a can’t miss experience if you want to experience something new and special. I always try and tackle shows that are exciting and new and something our audiences haven’t seen before and will enjoy.” 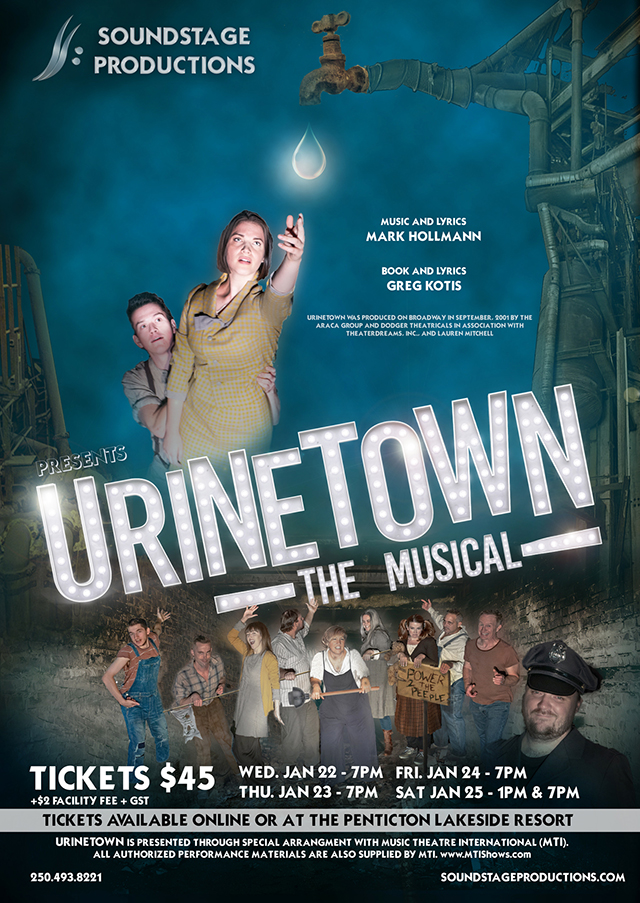 All Soundstage Productions are open to performers from across the Okanagan Valley – from Osoyoos to Vernon – but this particular shows feature mainly Penticton and area actors, singers, dancers and musicians, she said.

“We’ve had people from Osoyoos to Kamloops in our shows, but this particular show is mostly local, but there are a few members of the cast who are from Kelowna and a couple from Keremeos and Summerland,” she said.

Working with cast members who range from teenagers to retired seniors – some with no theatre experience to some who have been involved in numerous productions – is also challenging, but rewarding, said Ledier.

The on-stage cast for Urinetown includes 30 performers on stage, not including the orchestra and backstage and production crew.
Urinetown will be staged in the East Ballroom at the Lakeside Resort and Conference Centre for five performances, beginning the evening of Wednesday, Jan. 22. There will shows on Thursday and Friday evening as well and things will wrap up with a matinee performance at 1 p.m. Saturday, Jan. 25, with an evening show to wrap things up.

“I really appreciate the support,” she said. “It’s a gift to our community to be able to support the arts. I’ve always been told and believe that the health of a community is clearly shown by its support of its artistic community.”

Tickets can be purchased in person at the front desk of the Lakeside Resort and can also be purchased online at www.soundstageproductions.com or www.lakesideresort.com.