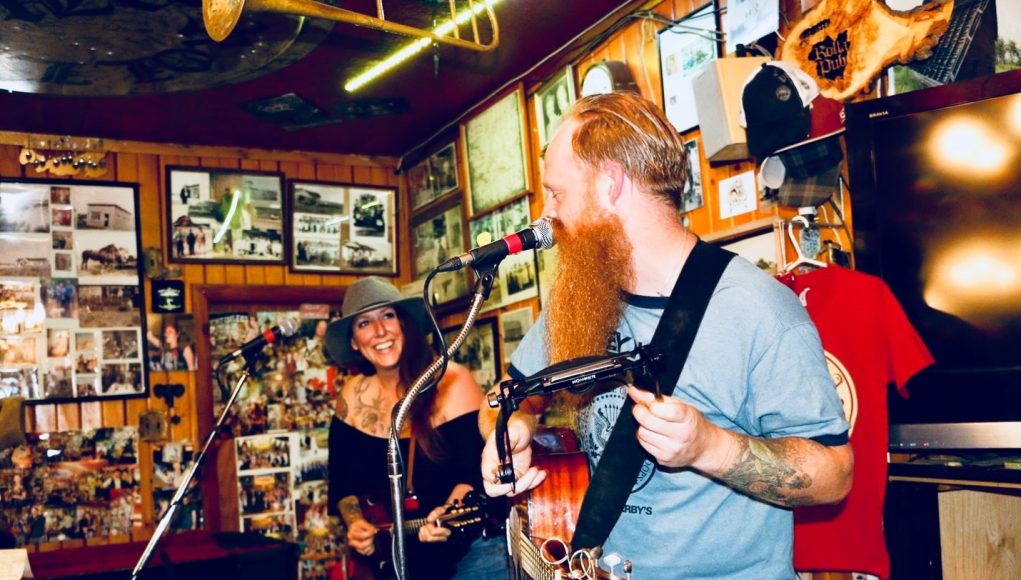 Gonzo’s Own Indie Dan is A Touring Musician Himself, And Here Are His Road-Worn Ramblings.

It’s been a couple months since I left Kelowna in my trusty Dodge Grand Caravan for the summer. My partner-in-crime Kasey and I have been blue-collar touring musicians for many years as Tiger Moon, and longer still with our other projects. This time of year we mostly live in the van, touring from town to town playing our brand of West Canadian Folk music and hand delivering our stories, our albums, and our performances to people across the country.

This year has proven to be significantly different than past years… Kasey and I have had a significant amount of change in our lives since we started performing together in 2013; Financial stresses, ups and downs in the industry, learning opportunities and ups and downs, but I’ll let these ramblings tell the story…

Full disclosure… In all honesty, Kasey and I didn’t rehearse and only performed 3 times together through the whole month of May which is a far cry from our usual habits. In 2016 and 2017 we performed about 150 shows each year, so this was rare, yet necessary time off.

The opening portion of our summer tour was particularly exciting for Kasey and I, as we were starting our annual touring season by shooting up North into territory we’ve never ventured through… Up the Alaskan Highway to beautiful Whitehorse, in the Yukon Territory. After a couple stops at some of our favourite places in Quesnel and Rolla, we would be moving on to unknown territory – which, for Kasey and I, is growing rarer and rarer.

But first – we had an event to host here in town. We’re event producers and story-tellers at heart, and every time we go on tour we like to throw a Tour Kickoff show. These are usually shows to release an album, or to celebrate one more time before we leave home for an extended period of time, but this year we had high ambitions… Our album release for Cariboo & Whiskey in June 2017 was one of our most successful events yet, and though we weren’t releasing a new album, we knew we had to have something comparable… 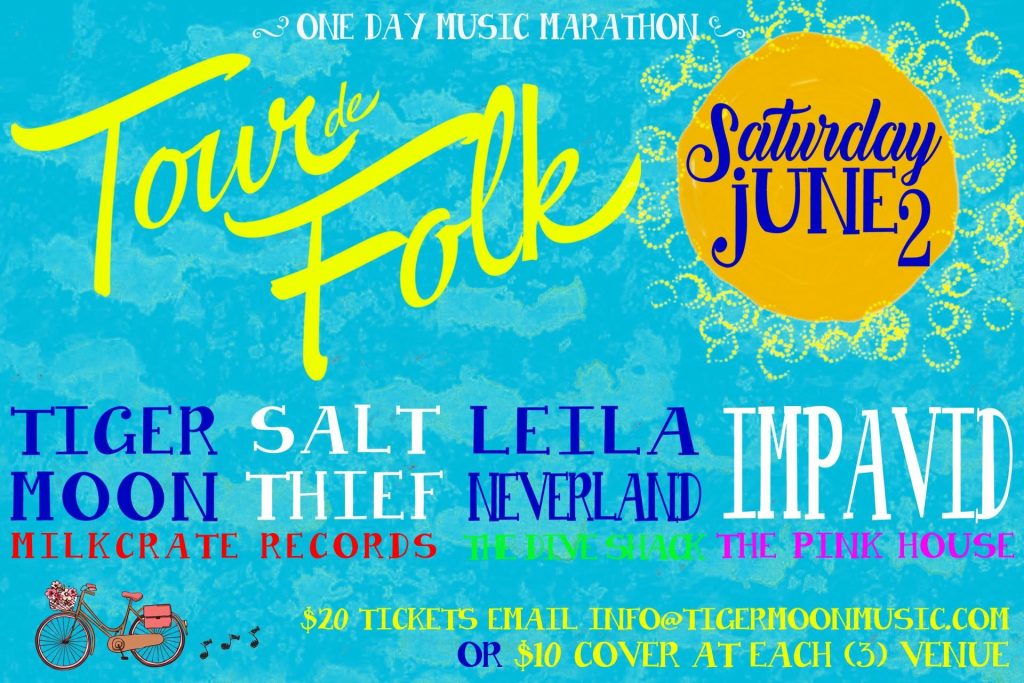 June 2nd we ran a very successful touring mini-music festival called Tour De Folk. It was a three-venue wandering music festival, hosted at two house concert homes and culminated at Milkcrate Records. Despite the heavy workload of running this event just a couple nights before we got on the road, this turned out incredibly well… We started the evening with a performance by local soul-folkers Impavid in the North end, moved over to The Dive Shack on Lawson to see songstress and master-creator Leila Neverland, and then brought the whole crew to Milkcrate Records to share a set with our good pals from East Van, Salt Thief. That would be our last show in Kelowna for awhile. 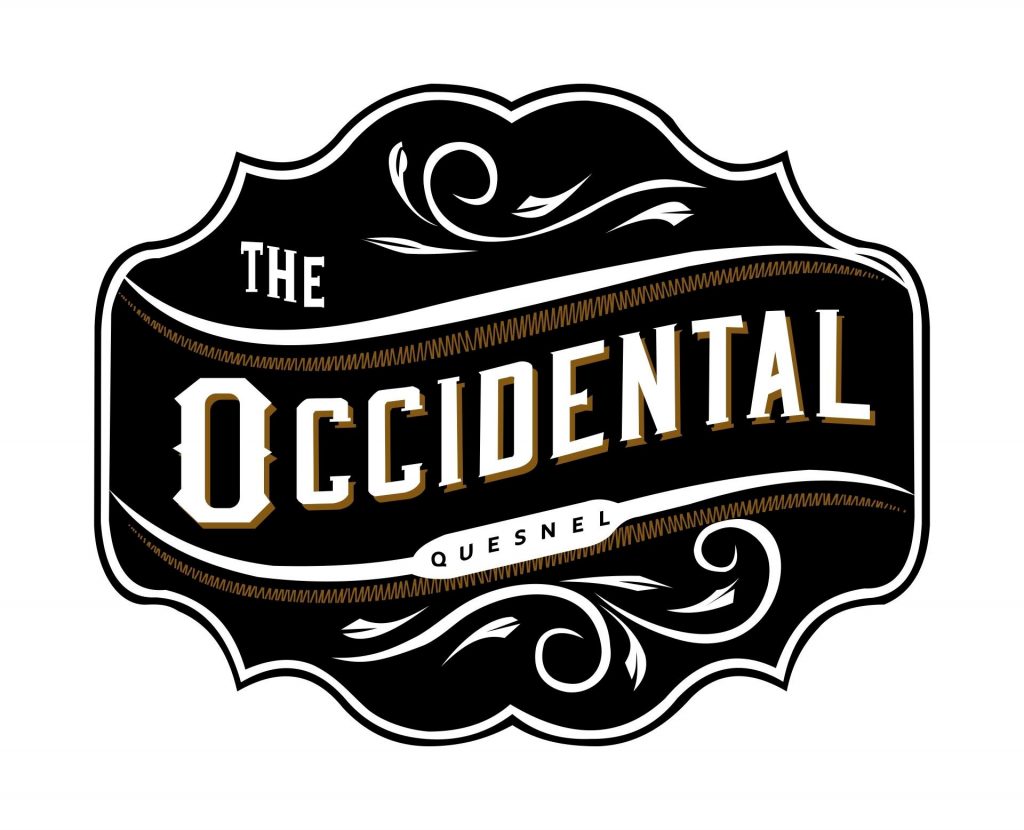 The Occidental, in Quesnel, BC. Image borrowed from The Occidental’s Facebook PageAfter wrapping up that epic event, we departed Kelowna for a performance in Quesnel at The Occidental. The Oxy, as we affectionately call it, is a fabulous fully-equipped concert hall in the heart of downtown Quesnel. They host shows several nights a week, ranging from burlesque shows, DJ shows and open mics to some of the heavy-hitters in the Canadian Music industry like Alex Cuba and Corin Raymond. We normally do really well in the Cariboo region – it is the namesake of our most recent album, and we have family and friends in the Quesnel and Wells area. This was a great opportunity to catch up with some of our favourites, and it was a really comfortable zone to shake some of the cobwebs off…

Kasey and I have been touring for many years, and one of the things we’ve done pretty successfully with our touring lifestyle is ensuring that we’re a self-sustaining touring band… Much like a turtle, we travel with our home just about everywhere we go. It keeps our overhead costs down, and allows us to forego (or at least drastically reduce) rent costs while we’re on the road. It all started with an ’81 Volkswagen Westy named Clementine… We Did 27,000 kms with ol’ Clemmy, but there came a time when she just wasn’t the efficient touring machine we needed for the road…

Which brings us to our current road hog. She’s a 2011 Dodge Grand Caravan we picked up from Auction World – and her name is Valencia. Since Valencia joined the band, she’s been directly responsible for getting us hundreds-of-thousands of Kilometres around the country… She’s probably been the most dependable member of the band over the past two years.

Our good friend Dave is a long time carpenter, and aspires to run a business camperizing mundane vans. He’s become a pro, and was so kind to build our sleeping & storage setup so we can tour with our gear (Guitars, mandolin, mics & stands, cables, kick drum, PA…).

With this all in mind, we have to be diligent hunters for free campsites along the road… It’s generally an all-around unfortunate experience being awakened early in the morning to move on… (See Tiger Moon Tour Blog – Goodbye Bayou, Hello Longhorns.) This was our first opportunity to hunt for a campsite early, and Kasey was on it. Kasey has always been the researcher. We found a spot to bed down about half way between Quesnel and Prince George; a park by a lake known to be fair-game by guerilla campers.

Our next tour stop was at a great little venue in the small hamlet of Rolla, BC. It’s called the Rolla Pub, and it’s located about 20 minutes north of Dawson Creek. Dawson Creek is, for those that don’t know, mile zero of the storied Alaskan Highway. We made a short stop in Dawson Creek to catch up with an old pal, see if we could find James Van Der Beek & the crew, and play a quick game of beer pong baseball in a college dormitory… Believe it or not, I impressed myself with my own skills despite the fact that it’s been nearly 5 years since I last played.

We zipped over to Rolla Pub after dinner. It’s a really small spot nestled in the rolling prairies traditionally found in the Eastern Foothills of the rockies. It’s a humble, unassuming building that has been standing for nearly 100 years, and that contains a world of history. Once you step inside, the whole place seems to greet you with a smile.

Photos and letters adorn the walls, instruments and old tools hang in corners. The room has a truly rustic, and well-lived-in feel to it. It wasn’t long before we met Patti, Rolla Pub’s diligent and sweet owner-operator. Instantly she was in host mode, ready to grab us beverages, have a quick chat and let us unwind from the road. She even pre-loaded the Jukebox for us so we could explore the walls of the pub.

It’s a little microcosm of music history. Photos of some of West Canada’s most familiar artists can be found literally all over the walls. I found Party On High Street, Scott Cook, and even Corb Lund on those walls. We saw long time friends and colleagues in the industry – local and abroad. High Society was in there, and our local pal (And one of Patti’s faves) Origami Army was up there too. There’s a giant concert kick drum mounted on the ceiling, and signed with all of these names and more… Our Wells pal Joey Onley had been up there with his outlaw band, and Patti pointed out his work boots – hanging in their newly retired existence above the door.

Kasey and I hadn’t known it – and those who haven’t been to the Rolla Pub still don’t know it – but our new friend Patti has been spending decades curating a beautiful piece of history. A haven of memories, of music, and of merriment. Each snapshot is part of the story that highlights the history, the careers, and the life & times of artists and creative from all over Western Canada and beyond.

Within moments, it was an instant comfort for us. Though we hadn’t yet developed a fan base this far North, we felt as if we were surrounded by our friends. We didn’t know what the show would turn out to be like, and we were still a little less confident than usual going into a tour, but it would turn out to be a barn-burner of an evening. Rolla and Dawson Creek showed up in droves, and we had a lineup out the door much of the night… Smiles were shared by friends and strangers, and Patti’s camera was passed around for photos of the patrons, the band, and of Patti. There were a ton of folks at the show, but it was a room filled with love. 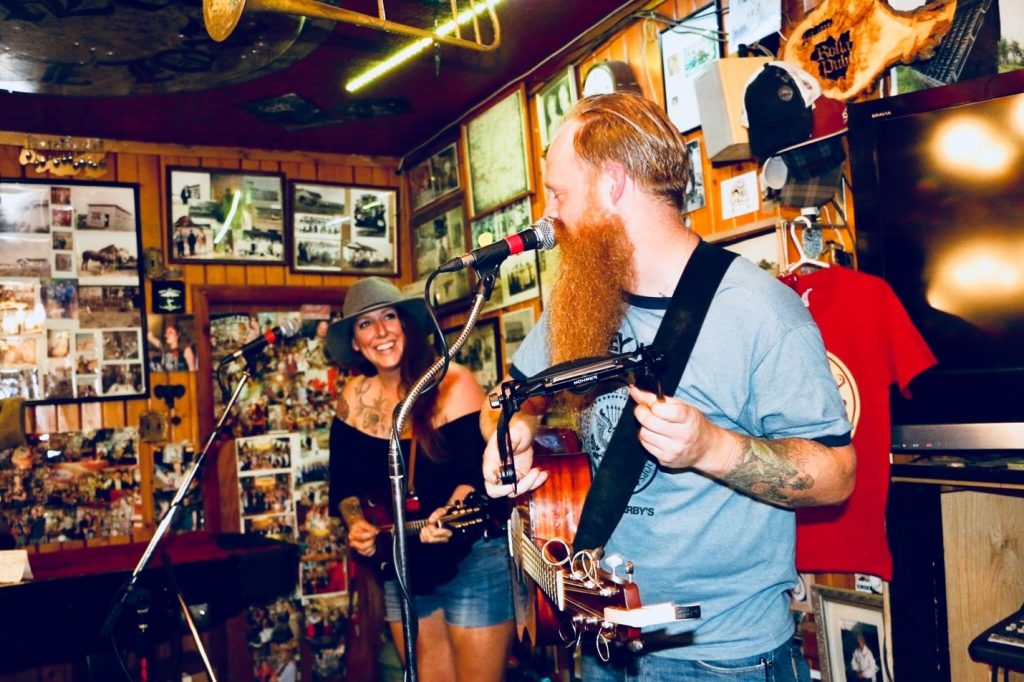 Kasey and I retired to the van – elated and relieved by the beginning of this tour. It could have gone much differently. No practice, a bunch of events before we went on the road… We got lucky. Either that, or the prior 6 years of performing together have paid off. We were tired from the two days of hard driving followed by performances, and were ready for sleep. But something lay beyond the horizon for us… The nights were getting brighter and later, and it wouldn’t be long until we found ourselves heading up the legendary Alaskan Highway….