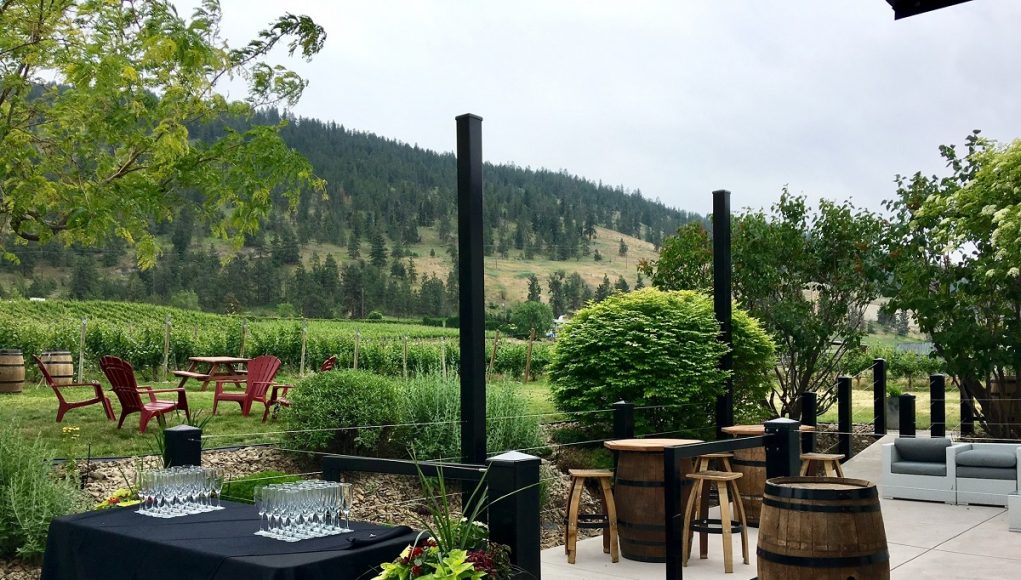 Whether you’re in the Okanagan or the Lower Mainland, check out Township 7 Winery. It’s one of the first BC wineries to boast two vibrant estate locations, the original in Langley and then the Naramata Bench.

See for yourself, Saturday and Sunday, December 15 and 16, when both locations host Holiday Open Houses. As the weather chills to winter, taste big reds such as the newly released 2016 NBO and 2016 Reserve 7. At Naramata Bench, it’s 11 am to 5 pm, with tasting fees waived in lieu of donations to the SPCA Foundation, complimentary Township 7 Merlot mulled wine, with wine and food pairing of local cheeses. At South Langley, 11 am to 6 pm, tasting fees are waived in lieu of donations to Ronald McDonald House Charities, acoustic music and seasonal classics played by Michael Gillette, complimentary mulled wine with truffle popcorn. Special magnums (1.5-liter format) wines are available for purchase to cellar longer or enjoy at special holiday gatherings.

Original owners Gwen and Corey Coleman founded it in the Township of Langley in 2001 naming it from the area’s historic name the Seventh Township. In 2004, they opened the Naramata Bench second location. They sold Township 7 and its two properties in 2006 to former restauranteur Mike Raffan and associate John Tietzen.

The focus on creating fine wines continued and was enhanced under this leadership initially with Bradley Cooper as winemaker. When Cooper left in 2014 Mary McDermott was head hunted from Ontario. Trevor Allen was recruited as assistant general manager. Ultimately, the capital expenditure required to double production and enhance the visitor facilities resulted in Raffan selling Township 7 later in 2014 to China-based investor Ge Song. Raffan stayed on board to guide the transition and see his vision realized. His wife Lori Pike-Raffan continued in her public relations role for the winery.

With this influx of capital, both locations have been greatly enhanced both in winemaking capacity and public interface space. Additionally, the Blue Terrace Vineyard in Oliver on the northern area of Black Sage Bench where grapes had been sourced was purchased. Clearly, a solid move to secure the fruit needed in production as consistent grape sources become increasingly problematic.

This year has been full of exciting news for Township 7 with celebratory ribbon cuttings on lovely new patios. Plus, there’s been lots of outside validation for the wine quality. The 2015 Seven Stars Sparkling Cuvée received three gold medals from BC Lieutenant Governor’s Wine Awards, Cascadia Wine Competition, and Los Angeles International Wine Competition. Sadly, with a production of only 266 cases, and a bargain price of $29.97 per bottle it is sold out. As the first release of its traditional method sparkling series, I absolutely adore it. I can’t wait to taste what’s next which I hear is a blanc de noir rosé made from pinot noir called Seven Stars Equinox and a chardonnay blanc de blanc called Seven Stars Polaris.

In the 2018 BC Lieutenant Governor’s Wine Awards, the sold out 2015 Cabernet Franc, Rock Pocket Vineyard, also was awarded Gold. While at the Cascadia Wine Competition, the 2014 Reserve 7 Red Blend was also awarded Gold.

Lucky enough to live by the Naramata Bench location, I’m on Township 7’s list to try to new releases and provide feedback. Whether it’s a classic white like Sauvignon Blanc, Chardonnay, Rosé, Pinot Noir, red blends like NBO or Reserve 7, I’m consistently delighted by the quality.

Additionally, with its many charitable events throughout the season and to highlight special days like Mother’s Day, Father’s Day, Valentines and so forth, it’s great to have Township 7 in the community.

To ensure getting your hands on the award-winners plus member only releases, consider joining Club SEVEN. Offered are exclusive Club SEVEN only wines, three shipments of eight bottles, no registration fee, 10 per cent off all wine purchases, two exclusive events per year, annual Naramata wine tour, and $50 referral reward.

With the wine industry quiet season is around the corner, it’s a good idea to check www.township7.com for hours of operation. Still there’s many opportunities to access what they’re creating in locations like the BC VQA Wine Information Centre in Penticton, Save-On Foods, and other wine and liquor outlets.