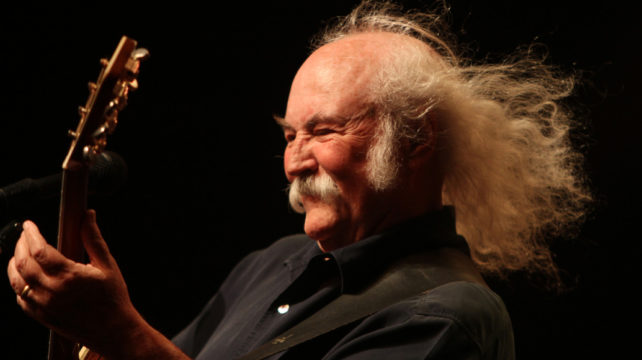 David Crosby Kelowna – An Evening with David CrosbyGhostfinger Productions and K96 presents…”An Evening With”DAVID CROSBYWEDNESDAY SEPTEMBER 14, 2016KELOWNA COMMUNITY THEATRE1375 Water St, Kelowna, BCDoors 6:30pm – Show 7:30pmTICKETS:$65.50-$80.50 + service charges/feesTICKETS AVAILABLE ATSelect Your Tickets 1223 Water St., by phone (250) 762.5050 or online atwww.selectyourtickets.comwww.davidcrosby.comCROSBY TO PERFORM INTIMATE SHOW, WILL PLAY CAREER SPANNING HITS, INCLUDING NEW SONGSLegendary singer-songwriter David Crosby has announced a series of intimate solo acoustic tour dates for September 2016, where he will perform with only his voice and guitar. The shows will feature repertoire spanning Crosby’s entire career, including new songs from his critically-acclaimed 2014 solo album Croz, and his 1971 solo debut If I Could Only Remember My Name, as well as selections from The Byrds, Crosby, Stills & Nash, and Crosby, Stills, Nash & Young.”This is about the songs. The tale telling,” said Crosby. “Taking you on a voyage to my world for a moment”.Crosby is a two-time Rock and Roll Hall of Famer, inducted with The Byrds and Crosby, Stills & Nash; he is also in the Songwriters Hall of Fame. In addition to his solo work, Crosby still tours and records with CSN, CSN&Y, and as a duo with Nash. He has written books— Stand and Be Counted: Making Music, Making History/The Dramatic Story of the Artists and Causes That Changed America, and the autobiographical volumes Long Time Gone and Since Then: How I Survived Everything And Lived To Tell About It.www.davidcrosby.comLegendary singer-songwriter and social justice activist David Crosby is a two-time Rock and Roll Hall of Famer, inducted as a member of both the iconic folk-rock band The Byrds — with whom he first rose to stardom — and the iconic Woodstock era-defining group Crosby, Stills & Nash.A native Californian-and son of an Academy Award-winning cinematographer-Crosby originally intended to be an actor when he moved from Santa Barbara to Los Angeles in 1960. Music prevailed, however, and Crosby began his career as a folksinger, playing clubs and coffeehouses nationwide. Back in L.A. in ’63, Crosby formed The Byrds with Roger McGuinn, Chris Hillman, Gene Clark and Michael Clarke, winning widespread recognition for his songwriting and charismatic presence. Driven by hits including “Eight Miles High,” “Turn! Turn! Turn!,” and a cover of Dylan’s “Mr. Tambourine Man,” The Byrds’ signature electric folk-rock influenced countless musicians to come.Crosby left The Byrds in 1967 to embark on a lifelong collaboration with Graham Nash and Stephen Stills. Renowned for vocal harmonies, stellar musicianship and timeless songs, Crosby, Stills, & Nash (CSN) have been called “the voice of a generation,” and were GRAMMY-honored in 1969 as Best New Artist. The trio’s self-titled debut album introduced classics including the Crosby-penned tracks “Guinnevere” and “Wooden Ships”—today, it is included on Rolling Stone’s list of the 500 Greatest Albums of All Time. Crosby continues to tour and record with CSN, as well as with Crosby, Stills, Nash & Young, and as a duo with Graham Nash.As a solo artist, Crosby debuted with the 1971 masterpiece If Only I Could Remember My Name, recently reissued as a two-disc set featuring a 5.1 mix, video footage, and other bonuses. David Crosby also performs and records with CPR, the jazz-flavored trio he formed in 1995 with his son James Raymond and Jeff Pevar.Crosby’s most recent release is 2014’s Croz, his first solo album of studio material in 20 years. Featuring 11 new original songs, Croz was released on Blue Castle Records, the label Crosby co-founded with Graham Nash in 2011. It entered the Billboard Charts in five different categories: Top 200 Chart – #36, Top Independent Album Chart – #6, Top Folk Album Chart – #2, Top Internet Sales Chart – #7, and Top Digital Album Sales Chart – #72. David Crosby, James Raymond, and Daniel Garcia produced Croz; and, Crosby and Raymond (David Crosby’s son) co-wrote a number of the songs together. In addition to Crosby’s band, the album features guest players including Wynton Marsalis (“Holding On To Nothing”), Mark Knopfler (“What’s Broken”), Leland Sklar (“Find A Heart”) and Steve Tavaglione (“Morning Falling,” “Find A Heart”).Crosby is also the author of three books including Stand and Be Counted: Making Music, Making History/The Dramatic Story of the Artists and Causes That Changed America, which underscores his commitment to social activism, and belief that artists and musicians are potent agents for change. Crosby’s two autobiographical volumes are Long Time Gone and Since Then: How I Survived Everything And Lived To Tell About It. The latter, per Entertainment Weekly, chronicles, “A fascinating life worthy of a sequel.”David Crosby Kelowna – An Evening with David Crosby